Vladimir Putin is not a great guy. On top of all the other ridiculous stuff he does and believes in, we don’t like homophobic dudes very much. However, anytime I see anything about ol’ Vladimir, it is truly hilarious. I have had a lot of full body laughter as a result of his antics. From him riding a horse while shirtless to Putin Fan Clubs in Russia… well what can I say? I’m a little glad he exists.

But there’s someone who makes me much, much happier. That someone is Vladimir Putin’s daughter, Katerina Tikhonova, boogie woogie rock and roll acrobatics dancing queen. 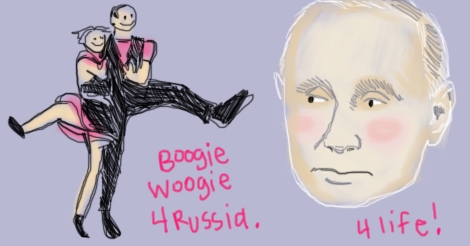 Katerina is Putin’s younger daughter of two. He does not often discuss his children, although last year he told reporters that both daughters were educated in Russia and still live there, which is likely not true. Anyway, Katerina uses a surname derived from her grandmother’s, presumably to live her life out of the spotlight.

Okay, so she’s in the spotlight still. She frequently dances at Rock n Roll Acrobatics dance competitions, which, of course, are a thing in Russia.

And for good reason.