My friend received a package from her dad in the mail containing DVDs, a CD, books, and a pickle. The sheer absurdity of it is impressive, perhaps only because it would never occur to me, nor any other reasonable human being, to mail a pickle. But there it was in front of us. The mail pickle. This description alone should have been enough for us to immediately deposit it in the trash, but it only gets worse.

Van Holten’s “Hot Mama” pickle is a fascinating object. It’s a rather large pickle floating in brine in a plastic sack. The “Hot Mama” is advertised as the spicy variety. The front of the sack announces to the world “contents: one pickle” and proudly displays that the product “needs no refrigeration.” Well of course it’s okay to mail this pickle. It needs no refrigeration. It contains 4,770 milligrams of sodium. For reference, the daily recommended maximum intake of sodium for a healthy adult is 2,300 milligrams. For the mathematically inept, this pickle has more than twice as much salt as anyone should eat in a day. 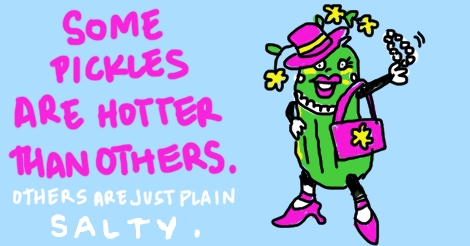 Again, all of this should have made us want to get rid of this horrifying thing as quickly as we could manage, but curiosity is a powerful thing. We had to try it! What other opportunity would we get to eat such an oddity?

Opening the package, slicing up the massive pickle, and bringing a piece toward my lips, I could have thought, “this is a horrible idea. Why, oh why, am I doing this?” I thought no such thing. I was too busy imagining how awesome this pickle might be. It could have been a hidden treasure. Salty foods taste awesome, so obviously foods with deadly levels of salt would be even better. Pickles are great, and the postal system is pretty nifty, so the combination of the two would be a masterpiece. How naïve I was back then. How simple and ignorant.

Upon placing the sliver of the pickle in my mouth, there was only salt. Spicy? No. Pickle? No. Brine? No. I tasted only salt, I felt only salt, and my eyes watered with a mild hallucination that can best be described as salty. I have a sneaking suspicion that Van Holten has discovered a chemical that is saltier than salt, which they are molding into a pickle shape, dying green, and selling to unwitting consumers. I wish I was exaggerating. This is magnitudes saltier than anything I’ve ever put in my mouth, which happens to include water from the Dead Sea.

Did we stop there? Of course not. That would have been intelligent, or at least a facsimile of it. I rinsed it. For a significant amount of time, I stood in front of the sink, running the demon pickle under cool water and wringing it out over and over, hoping against hope that it would make the pickle edible. What a fool I was. After at least ten minutes of this utterly ludicrous process, we tried the pickle again. No change. Just another a-salt on our mouths.

After the initial retching and burning, I was able to function again, but the saltiness didn’t leave. Lingering like a sore, I continued to taste the salt well into my fourth cup of water. I woke up in the morning with a stomach ache and the taste of salt on my breath. I offer this story as a warning to any of you curious and foolish enough to do as I did. I implore you not to. It will only end in salty, salty tears.