We humans have always been preoccupied with the end of our civilization. Sure, we have pocket-sized computers that can send signals across undersea cables to people on other continents virtually instantaneously, but on the other hand, a disturbing number of us use this to send pictures of our genitals to these people, often while driving. So it’s understandable that we tend to think our glory days of international space stations and individually wrapped cheese slices are numbered, and that we’re just one drunken diplomat away from going back to drawing penis gods in caves and killing each other with rocks and twigs. 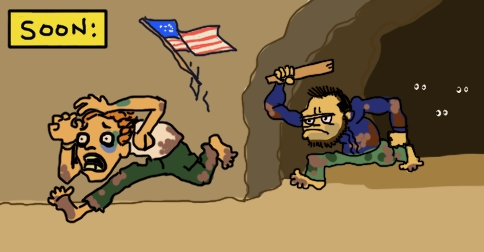 Some even look forward to this day, convinced that they’re special and chosen and have what it takes to survive the aftermath of a global pandemic, when the fit 21-year-old they watch jog by three times a day from their sofa does not. You won’t be winded after yank-starting your lawnmower then, no sir! You’ll be the leader of a grizzled group of survivors, fighting daily for survival and eagerly scarfing down a bag of dry lentils as your first food in three days. Who needs a coffee shop on every corner and plentiful food? Bring on the economic riots!

This mindset has spawned a subculture called “Doomsday Preppers,” who spend much of their free time converting basements and digging backyard bunkers because they know that a major civilizational collapse is coming, and some bottled water and freeze-dried burritos are going to help them survive a good six weeks longer than the rest of us. There doesn’t seem to be a consensus among this community as to which doomsday is coming. Some wait for nuclear holocaust, others for economic collapse, yet more for ecological disaster, and many just sit among their pallets of creamed corn and rock back and forth while murmuring “Obama” over and over.

I know you want in on this action before you are stuck in the ruins of a major city fleeing from a group of sexual cannibals chasing you on scooters with spikes welded to them while they wear discarded football gear, so here’s what you need to know to build a fortified bunker to escape to, along with several attractive members of your preferred gender who will show up just like in those movies on Showtime. 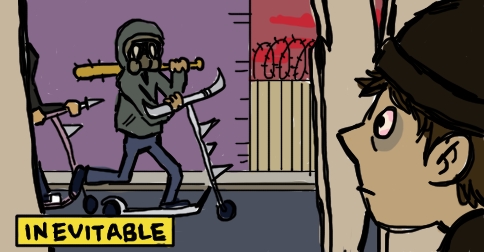 ONE: Pick a doomsday. Knowing which doomsday is coming is key to knowing where to put your bunker. Fear a nuclear disaster? Buy an old missile silo! Floods from climate change? Try a pillbox on a large hill. Obama? Try a gated community. Zombie holocaust? Keep drawing pictures of your zombie hunter persona on your Lisa Frank Trapper Keeper until the lunch bell rings.

TWO: Stock your lair. You are going to need enough food and clean water to last you and your family the rest of your lives, so don’t hesitate to tunnel across the street and add your neighbor’s basement to your own. Sure, he waves at you when he walks his dog now, but you’ll have to blow him away when he kicks in your door to steal your precious cans of nacho cheese after the Collapse. No need to play nice now when apocalypse is nigh. Try to space out your trips to Costco so your friends and neighbors don’t know to target you and your precious supplies. You’ll be right to blast Uncle Ralph in the face and will be the motivation to buy complete AR-15 rifles if you have to, but better he look elsewhere for food and starve without troubling you. Only so many cases of Snickers to go around!

THREE: Make a plan. We know from instructional films like “Dawn of the Dead” and “I Am Legend” that apocalypses tend to happen quickly, and you may be caught stocking up at Costco or working your dull office job with those slack-jawed fools who don’t even take the simple precaution of keeping an emergency dynamite stash in the back of their file drawers. You need a quick and efficient way to navigate streets filled with screaming, looting, burning people. Try buying a large 4×4 pickup with a spiked brush guard on the front. This will allow you to plow through as many terrified sheeple as possible on the way to your hidey hole. Set a time after Zero Hour to seal your redoubt so your loved ones have a chance to display responsibility and find their way to you. Bootstraps. Tough love.

FOUR: Whiling away the rest of your life. If you have the scratch, invest in an atomic-powered multimedia center with terabytes of entertainment and library of books. Maybe a few models of clipper ships with all of the rigging! It’s also a good idea to compile a time capsule of what humanity was like as your hole and the Voyager probes are likely all any alien archaeologist will ever find of us.

You’re now as ready as I can make you. You’ve taken your natural instinct to try and impose order on a much more powerful and chaotic world to its natural conclusion, unlike those losers who expend their time and energy in making the world a better place. As the flames and screams outside quickly give way to endless decades of darkness and silence, you’ll have plenty of time to remind yourself of how right you were, and how lucky you are to be alive.