I don’t remember the first time that I watched an episode of Mystery Science Theater 3000. It’s pretty much all a blur of childhood excitement, waking up early Sunday mornings to watch, sometimes falling asleep halfway through anyway. Nowadays, I primarily watch MST3K with fellow writer Daniel Haun. 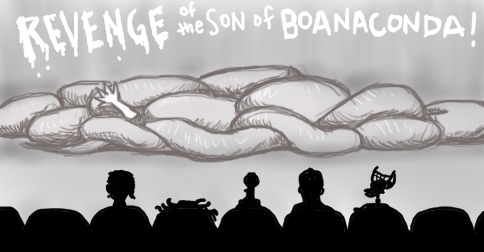 You have probably heard by now that there is a Kickstarter to bring back the show, and I’m doing my part to “Keep Circulating the URL” because Joel asked me to and he’s my favorite. Even if you don’t contribute to the Kickstarter, you should help spread the word if you love the show! As of writing this, it’s already surpassed the initial goal of $2 million, enough to make three episodes! Let’s get some more, though. 3 episodes is not ideal, so let’s make it to 12 episodes and $5.5 million.

Every little bit helps, but especially our support! I think we should all go out and show our favorite episodes to our friends. We should tell them why Joel or Mike is our favorite, and why they’re both great. We should run around in jumpsuits and riff on life! We should make the best of any situation, just like Joel trapped in space, watching some great bad movies with his best friends!

My most memorable episodes may not be the best ones (although they probably are), and I’d like to share them with you. Also, more specifically, these are my most memorable two episodes (okay, one is just a short) that also happen to be readily available on YouTube.

Before we do that, let’s talk about this new host, Jonah Ray! I know we’re all skeptical for various reasons. Joel is a great dude, and he tried his best to explain people’s burning questions periodically on the campaign. I recommend that you read it! But here’s what I have to say:

Joel Hodgson is one of my favorite people! I have always loved Mystery Science Theater 3000. There are a lot of things that I love about it that have nothing to do with who the host is. One of those things is how funny it is! I do think Joel is hilarious, but come on, there are writers, one of which was Mike! Whether you love Joel or Mike, or soon love Jonah the most, it doesn’t matter! They all deserve our love! But also, don’t forget that the show isn’t about the host.

Welcome to the team Jonah! We’re glad to have you around. 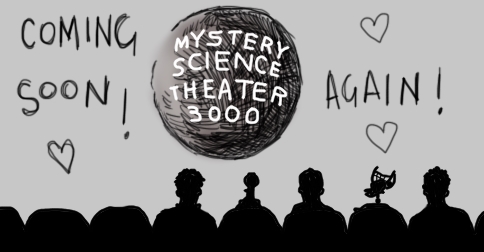 I first saw this probably some Sunday that is now lost to the past, back when I was a young, tinier girl. It’s funny as they all are, and I likely did not think much of it when I saw it then. I later learned a lot about this movie though, and how it was made, and so I enjoy this episode whenever I watch it. It’s a pretty typical 1950s sci-fi movie, starring boring teenagers who do something-or-other and who cares. Also there’s lobsters!

This is the greatest short that I have ever seen on an episode of MST3K. Not all of them had shorts, so it was always a treat. In this particular one, we meet Coily, eternal lord of the springs, who shows us the hell we’d be living in without his kind. Watch it and you’ll be shouting “no springs!” at your friends in no time at all. Coily, I love you.