Restaurants: From Clowns to Sommeliers

However, people do tend to prefer congregating in the presence of food and drink. Now, I have never found a satisfactory explanation as to why people have this compulsion to shovel food into their faces in order to socialize. The best I’ve been able to come up with is either that in a restaurant, there are people paid to clean up after your nasty friends (though whomever is tasked with cleaning the bathrooms is paid nowhere near enough), or there just weren’t enough “Pop-Tarts” at home.

Restaurants are a major element in our culture. They’re everywhere. From the smallest of towns to the biggest of cities, from tiny greasy spoons to fine, urbane French eateries, restaurants are a place not only where one can actually use real-life math skills when figuring tips, but a place to gather, socialize, and drink until the bartender starts reading medical textbooks on diagnosing catastrophic liver failure. 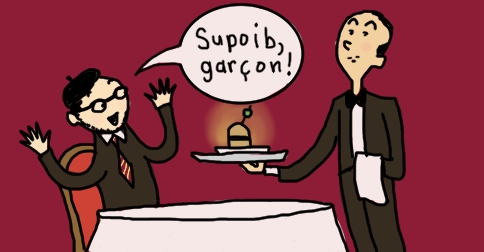 Generally speaking, there are three major classes of restaurant. The lowest class is of course fast food. Fast food is defined not only by the blandness and monotony of its menu (the new McBun!), but by the general homogenization it brings to our culture. You can walk into a McDonald’s in Boise, Iowa, and it will be exactly the same as being inside of any other McDonald’s on the planet (except for Pomeroy, Ohio, where you can still gleefully order and devour a McPizza).

Now, I admit that there are subtle menu variations based upon geography, and I assert that it makes no difference. I was in a McDonald’s in Montreal, and I noted that they had poutine on the menu. I freely admit that I am not French-Canadian. I am not Canadian at all. I cannot claim to be from any geographical or cultural zone that in any way, shape, or form is connected to anything French-Canadian. I am from the American South, where even the ice cream is deep-fried. And yet, I know instinctively that McPoutine is bland McDonald’s crap just like every other McFood on the McMenu. It might as well be that every McDonald’s restaurant is just a hollow shell, with the doors being portals to the Mc Dimension, which is just one large McDonald’s restaurant. Such is the acute degree of homogenization that McDonald’s brings to an area.

An oft overlooked sub category of the fast food phylum of the restaurant kingdom is the diner. Now, in the States, particularly in the South, there’s an interesting chain of diners known as the Waffle House. Maybe some of you aren’t familiar with this chain, as it’s based in Georgia and seems to taper off no further north than Virginia. Waffle House restaurants are the most homogeneous buildings on the planet. Every Waffle House is THE SAME. They are identical, tiny yellow and brown buildings that are actually prefabricated. There is but one Waffle House architectural design. Once you get as far south as Tennessee, and especially in Georgia, Waffle Houses are EVERYWHERE. They especially tend to sprout at interstate exits. And yes, they do in fact SPROUT. You can drive by a location one day, and it’s an empty field. The next, there’s an open Waffle House, complete with battered Formica and a tired-looking waitress. Now, here’s the craziest part about Waffle House placement: It is common to be driving down the interstate, and see a bright yellow Waffle House sign at the end of an off-ramp. Then, if you look across the interstate, on the exact same road at the end of the off-ramp for the other direction, there is ANOTHER WAFFLE HOUSE. I swear this is true. They are often less than one hundred feet from each other. The first time I encountered this, I was on a road trip with a friend of mine. I pulled over. Right on the shoulder of the interstate, I got out. I slowly looked from one Waffle House to the other. And I turned to my friend, and I told him, “you drive.” And I refused to open my eyes until we were safely out of Georgia, lest such visions of madness destroy my very soul.

However mad Waffle Houses can appear on the outside, inside they are true diners. And the internal diner ambiance is what differentiates a diner from typical fast food. Inside, you’ll see some of the most incredible people you will ever see. And I do not mean incredible in the “Martha Lou is an incredible person for raising her six quadriplegic kids alone in a trailer in the middle of the Gobi Desert after her husband was brainwashed by the Nigerian Army” sense, but in a “I am calling the eye doctor as soon as I get home” sense.

This is especially true if you visit during the graveyard hours, where there is guaranteed to be one person there who will have some sort of physical or emotional problem manifested to the point where you will just gape. I once saw a person who was every bit of six and a half feet tall and three hundred pounds of a truly indeterminate gender waiting on a woman who was three feet tall, a hundred and fifty pounds who was wearing a miniskirt, a fuchsia tube top, and enough makeup to fill a moderate-sized pothole. If singer-songwriters ever discover this, we’re all doomed. On a different visit to a different Waffle House, I struck up a conversation with a waitress who turned out to moonlight as a prostitute. She offered me quite a competitive deal on her services, but I declined on the grounds that the cost of having penicillin injected directly into my sex organs for the next ten years would probably offset her discount. I defy you to have experiences half as interesting as that in a Burger King. 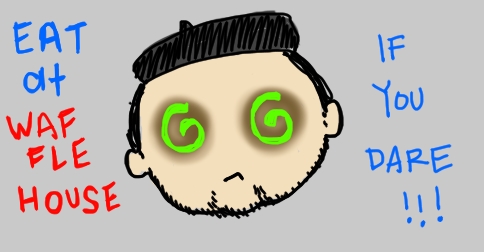 The middle class of restaurant is typified by the dime-a-dozen Bar and Grill places, like TGI Friday’s, Applebees, Chilis, Moose Hut and N*SYNC’s House of Below Average Masculinity. These places offer table service and food that is usually some sort of organic matter made to order. They are typically characterized by “flair,” which is what restaurant designers call their accommodating a paranoid fear of empty walls. “Flair” is stuff like typewriters, skis, canoe paddles, old books, and pool tables screwed to the walls. The general effect is that of being served food in a well-appointed garage. All in all, though, these places aren’t bad, and tend to have the most flirty of servers.

One notable exception to the “flair” rule is a restaurant called Hooters, which as you would expect is devoted to calling the diner’s attention to the plight of the Spotted Owl. No, seriously, Hooters eschews wall flair for waitress flair, in that the entire restaurant is staffed by busty young ladies in tight tank tops and hot pants. I’ve been there several times to marvel at how exploitive and sexist it is. On my most recent trip, some friends invited me to watch a wrestling special there. I agreed, because I am an idiot. So I’m sitting in Hooters, with my friends, who are all single straight guys, and we’re watching wrestling. They’re ignoring the waitresses in order to watch large musclebound men in bikini bottoms writhe on a mat. And then, they get to the Main Event, which is the founder of the wrestling league or whatever you call it wrestling his OWN DAUGHTER. So I’m sitting there, and these waitresses are bending way over to fill my ice water, and all of my friends are laughing and cheering as these fights play out, and there’s a guy on the big screen using a lead pipe to beat upon a woman who is at least pretending to be his daughter, and in that moment I realized what it must feel like for Bruce Banner to turn into the Hulk. Dan smash room full of morons!

The highest class of restaurant is the fancy, or “Hoity Toity” restaurant. These restaurants are never part of a chain, and usually boast a waiting list just to get on the waiting list. They inevitably have a French name with a lot of apostrophes that translates into something like The Gilded Asparagus. There is always a formal dress code, and you’ll want to slip the maitre d’ a twenty if you wish to get a table while your jacket is still in fashion. Basically, the big draw of restaurants of this caliber is being able to say that you ate at a restaurant of this caliber. When you’re wanting to impress someone, load them up into your Gremlin and drive them up to L’aisselle Piquante. Just be sure to tip the valet extra for having to be seen in public near your car.

Now, on the previous two restaurant classes, I followed up on the description with a personal anecdote. However, I don’t have one for this one because none of the restaurants would let me in even to bus tables. So the best advice I can give you is that when ordering wine, always ask for a sample of the house wine. Sniff the cork when the sommelier presents it to you, then recoil in disgust as if the cork were actually dog feces on a stick. Then, grab the bottle firmly by the neck and bludgeon the sommelier about the head while bellowing about how if you had wanted dishwater you would have asked for dishwater, dammit! This helps to establish yourself as a connoisseur of fine wines, which will impress both your guest and those around you. Panties may be thrown.

So, in summary, restaurants are cool, always tip 15%, and never expect valet service at a Tim Horton’s. Trust me on this. And always go with the frosted “Pop-Tarts.” They have more flair.