I am always telling people that our superhero of New Jersey is Cory Booker. I have even probably written an article for one of my print publications with this same headline to that effect. But as much as I love Senator Booker, he can’t do the dirty work that real, super, superheros can do, by virtue of being unaffiliated politically, I suppose.

So, if you haven’t heard, I’m proud to present, New Jersey’s Original Superhero: The Toxic Avenger.

Born in Tromaville, New Jersey, Melvin Ferd III was a standard nerd. While working as a janitor at the local health club, he is literally bullied out a window, after being tricked into putting on a pink tutu. He falls out the window right into some toxic waste, of course. After running home, The Toxic Avenger is born, mutated from poor, bullied Melvin into a superstrong, supergood, superviolent Superhero.

In several movies, a cartoon, a musical, and more, Melvin attacks evildoers wherever he can find them. He senses evil and then does graphic violence to the bad guys. Very graphic, but pretty comical still. In the first movie, The Toxic Avenger, directed of course by the famed Lloyd Kaufman and Michael Kerz, Toxie falls in love with Sara, a blind girl. She loves him in spite of his monstrousness, which is adorable and unlikely.

He’s a great hero for all, conquering the evil and defending the weak! He gives New Jersey a good name and I’m proud to have him as one of our own. Be sure to celebrate Be Nice to New Jersey Week, or Toxie will make you! 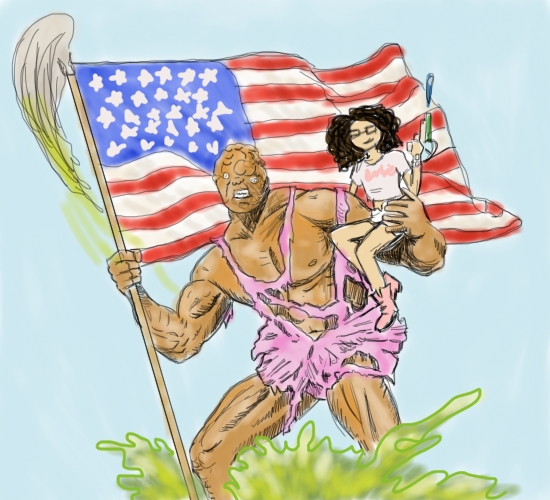