I thought it would never happen to me. I really did. I watched in amusement for years while other people did, right in front of me. Right in public! Then finally it happened. We were in line for a Woody Allen movie (if it’s any consolation it was very bad), and we started to argue. I don’t remember what it was about. I do remember saying all of the following:

“Stop it, there are people around us.”

“We are NOT fighting in public.”

“What’s wrong with you? Keep your voice down.”

At least now, those are my favorite things to hear from a distance in a crowded cafe or in CVS. Why? Because you know a fight’s a brewin’. 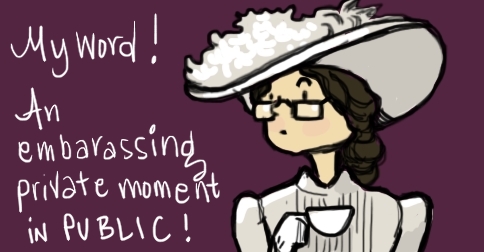 The beauty of couple fights that you generally see in public is that they appear to be about complete nonsense. You get no context of the weeks or years they were in a relationship, no information about everything they were already mad about, and they’re right in front of you. Your very own reality show.

The banality of two people arguing in near tears about which side of the street they walk on is fuel for the spite fire within. It provides easy entertainment and a fulfills a deep, confusing need for watching people burn. What was I saying?

Right, here are some good places to find couple fights if you are craving that very special high:

Seeing one is a great gift of luck and you should really embrace it. Listen to all you can possibly hear, speculate as much as you want. Message all your friends that you are witnessing a couple fight and who you are rooting for. Guess how it will shake out. If you can, stay until they disappear. One thing to remember is that, just as these fights likely did not really start over which kind of paper towels to buy, it likely will not end at the grocery store. These fights continue later, while they head home, while they argue at night. They continue for hours or weeks, even years. These fights spread and grow. Be happy that you are watching a seedling get watered, it has so much potential. 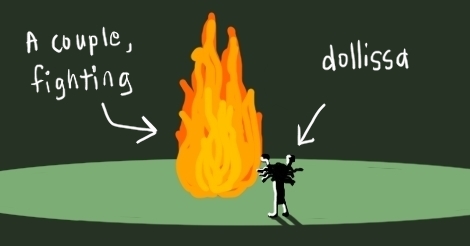 Warning: Beware of couple night fights as they can get messy, and creep more toward the label of domestic disturbance. If you come across such an argument you should not laugh or watch and you should try to make sure things are okay, or call for some assistance.

Oh, I remember! The fight was about whether or not I was obligated to sleep in his bed. Just be glad that fight you see isn’t you.