Well, it’s once again time for my favorite holiday to roll around. A holiday of lighthearted fun, fanciful masks, eerie flickering candles, and the taking of loot from total strangers. That’s right, this Saturday is “Mug a Furry Day.”

No! That was only in a dream I had that featured 50 Cent and Elmo from Sesame Street, and I have decided that I’d best not speak of it any further. No, this Monday is the holiday devoted to visions of madness and carbohydrates almost as unsettling as my dreams: Halloween.

Halloween is a great holiday. It’s not over-commercialized like Christmas, there are no Halloween-bowl games, and you’re not expected to eat too much of a mediocre dinner while being forcibly polite to people you hate. And it’s not like Thanksgiving, where you starve yourself the day before just so you can engage in acts of gluttony not seen since the vomitoriums of ancient Rome. Halloween is about fun, pure and simple. If you’re a kid, you get to dress up like a ninja or a ballerina or a cyborg skeleton zombie hellbeast or Khalil Gibran and go door-to-door asking for candy. If you’re an adult, you get to dress up as a robot or crack whore or acupuncturist or Karl Rove and, well, drink. If you’re lucky, you’ll also get to inflict some psychological scars on some trick-or-treaters.

The history of Halloween is a long and exciting one, filled with wars, aliens, potted ferns, knife fights, and even a musical number. The word Halloween comes from the Senior Citizen English Hall O’ Weenies, an annual fall festival where the British would gather in a large hall and drink. Soon they would pass out under the table, and the Druids would come in and rob them. It was in this manner that Halloween came to be used to refer to the Druidic Fall Festival of Savings, where the Druids would sell off their old hooded robes at or below cost while their boss was away. Obviously, these were truly crazy times in which to live. 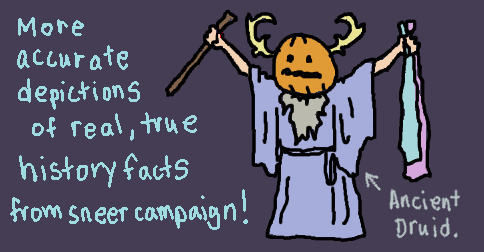 In 1467, nothing of any consequence happened. But the very next century, Halloween would be raised from the ashes of the Druids, brushed off with the brush of reinterpretation, and thrust once again into the light of western culture like some sort of an awkward metaphor. In southeastern Spain in 1522, one of the last surviving bands of the brutally persecuted Scientologists, hiding out in caves to avoid the vicious bands of Inquisitors, Peasants, and Quail that constantly sought the bounty on their ears, took the name for their annual Rite of Auditment. This sacred ceremony involved the giving of all their worldly goods to the tribal leader, then digging a huge hole and shoving each other in. There wasn’t much need for others to persecute them, really. They did well enough on their own.

Fortunately, the obscure Scientologist cult soon died out, and as we all know never troubled humanity again. But this was not the end for Halloween. Hardly was the last Scientologist at the bottom of the hole before the Germans took the name for their Festival Of Beer. HalloBierSchafen was considered a great lead-in to Oktoberfest. In fact, parents were so inebriated during this time that their children were forced to go door-to-door begging for food and pretzels. It was truly a dark time.

This practice continued right into the twentieth century up to World War Two. This gave the Nazis a great tactical advantage in the holiday technology race. Where the Germans were deploying Halloween on the front lines to devastating effect, the best the Allies could manage was a weak and feeble Arbor Day counterattack. It took the brilliant minds of Albert Einstein and Dr. Robert Goddard to reverse-engineer the Germans’ Halloween weapon and turn it to the Allies’ advantage. And so it was that on the night October 31, 1943, entire brigades of cavalry parachuted into occupied Switzerland, all dressed as vampires and ghosts. It was truly a sight to behold. 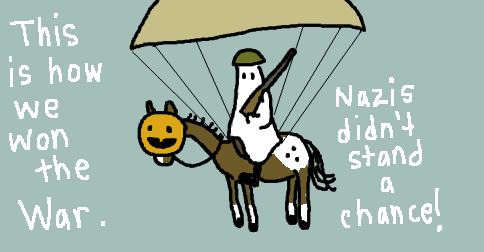 This leads us to the postwar baby boom era, where Halloween became a fun holiday for kids to get candy from their neighbors and bob for apples and go to sock hops and everything was just so WHOLESOME, dammit! Also there was the Red Menace.

So now we come to today, where Halloween is a benign secular holiday, loved by all but certain religious fundamentalists with a huge stick up their collective ass. However, since these religious fundamentalists have sticks up their asses over everything but mandatory Bible study and wife beating, they’re best left to the ATF. So now the holiday is for scared and confused young children in outfits consisting of nothing but reflective tape and strobe blinkers. These kids are shuffled around the area by their obsessive parents, their every step and twitch being recorded. Once the treats are taken, the parents carefully examine each item to make sure it’s not full of rat poison or razor blades and also to take the really good stuff.

And these are just some of the high points. A bunch more stuff happened, but I’m not going to get into that since I’m far too lazy to think it up and write it down. Suffice to say, a lot of enlightening and fascinating things happened to give us our Halloween rituals of dressing in costumes, asking for candy, drinking, and vandalism. It’s a safe bet that Pagans were involved. 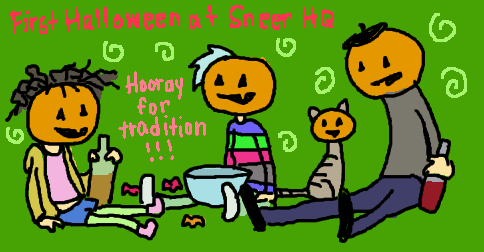 Original Meaning: To put out pumpkins so that the evil spirits that roam the earth on All Hallow’s Eve don’t enter your home, steal your baby, make faces at your dog and eat everything in your refrigerator, including the six-month old bean casserole.

Altered Meaning: To dress up in fun costumes, and go door-to-door for candy or have fun at a party.

Current Meaning: To lock the kids up all night because psychopaths and pedophiles are everywhere, roaming the streets in order to enter your home, steal your baby, make faces at your dog and eat everything in your refrigerator, including the six-month old bean casserole. And if the child even mutters the word Halloween, he or she immediately becomes a godless Satan worshipper for life, and promptly wanders off in search of a goat to sacrifice.

And remember: if you must trick-or-treat, wear a condom.