Parlor Games: Supplying You with Japeries and Amusements Since 1837

The Victorians are all too often written off as being an uptight bunch of moral nutjobs who lived in an age to which we must never, ever return. That is basically true. There is a whole lot of stuff that was common in the years between 1837 and 1901 that we would be better off without, forever. A whole lot of stuff. But there is one thing that should make a bold return, and that is “Victorian Parlor Games.” 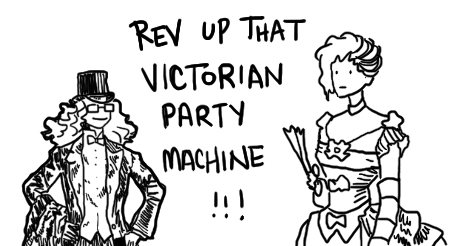 Even though most of the population of the Victorian Age was impoverished and working eighteen hours a day, the middle class formed and luxurious free time started to become available to people outside of the wealthy idle elite. Back then, there weren’t televisions, video games, and apps to waste all of your time with of course, so they had to devise games to play in gentle social settings. They were still joyless and genteel, so they couldn’t just gather and get blasted on booze or the devil weed. Let’s just say that they did their best.

You can do your own research (I love it when you do your own research), or I guess you can just follow this single link I am willing to supply for you, to see for yourself just how they used to do it. Most games seemed to center around getting light-headed or not-laughing. Sometimes those two things would be combined, if they were feeling really full of jolly-beans!

Some day, you may find yourself without electricity. It seems to be a more and more common scenario, as natural disasters are ramping up in devastation, and our infrastructure steadily disintegrates. In some places, even a moderate rainfall could leave you without television channels and with an internet that is so slow that it is worse than not having a connection at all! So, I advise you to print out this article for reference on such times, because you won’t want to use your precious battery all up.

Three Maids and a Handservant

Three of the most fetching gentleladies will be preselected by the host. They will be expected to cheerfully go about the activity of asking each gentleman present a question apiece which will determine whether or not he shall accompany them hence. The questions are to be of acceptable absurdity but queried in a manner of grave importance. If the gentleman answers poorly, he is to be passed over. However, if one of the selected maids breaks the spell of solemnity, she is to pay a forfeit. Once a suitable handservant is collected, the quartet is to go round the room, imparting playful criticisms upon the remainder of the company. Each of the maids speaks with an imperious tone unbecoming of her station in life, and the handservant closes the brief meeting with an apology upon their behalf and a deep bow. Utmost seriousness is to be maintained by one and all. Any mirth is to be met by forfeit.

The company is to stand stock-still upright around the perimeter of the room. In doing so, the assembled shall breathe as one, blowing aloft the prettiest red autumn leaf which has been previously gathered from the lawn garden. Expiration is to be engaged as rapidly as possible, keeping the leaf perfectly at height with the tallest gentleman in attendance. The first of the company to show a trace of levity will pay a forfeit and be asked to sit alone on the grounds to contemplate his or her social disgrace.

Are You There, Mother Anne?

A circle is to be formed, arranged alternately of a gentleman and then a gentlelady, and so on. Stifling any laughter, the company is to remove their elegant lace or leather riding gloves, whichever the case may be, and then lightly hold hands with the partners at either side. The host at this point shall snuff all but one tapered candle, which shall then be placed in the center of the assembled gathering. Each present in turn shall speak aloud in whichever mood strikes him or her and ask, “Are you there, Mother Anne?” After each question, the rest of the party is to emit one long, ghostly “ooooo” moan in hopes of rousing a spirit into communication. The game concludes immediately upon the first fainting spell experienced by a lady, who is expected to come out of her vapors to the sounds of the company repeating, “We are pleased to have you join us, Mother Anne,” and after which she is to be addressed only as “Mother Anne” for the rest of the party. 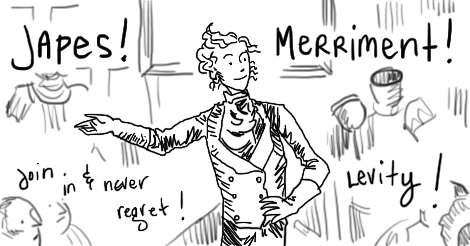 A Pig in a Needlework Factory

Names of the company are to be collected in a hat and drawn at random to select characters to perform as the Factory Owner, the Orphan, the Pig, and the Butcher. Once the roles have been filled, onlookers are to assemble round the parlor piano and sing the standards of the day at an increasing tempo as the play act proceeds, and it is to proceed thus: The “pig” begins in the center of the room and grunts thrice. The “orphan” then appears and exclaims such things as, “Cor blimey, there’s a pig in here, wot! Mr. [surname of the “factory owner”] will have my head for this, he will.” Thereupon the “factory owner” enters the room with a stick in hand and will endeavor to thrash the “orphan” to within an inch of his life, all in the spirit of good fun. Throughout this pantomime, the “pig” shall continue to grunt until the “butcher” arrives and the chase is on! The antics will reach a crescendo as the piano reaches peak tempo and the “pig” is hilariously hog-tied for all to see.

A gentleman selected at random will be charged with the task of approaching each lady present in the company and asking her if she is fond of the light of the moon. Upon receiving this query, each lady is expected to respond, “Lo, the light of the moon is very pretty indeed, but do you not see a thing which is prettier?” The gentleman is then to exclaim, “Verily, you are lovelier than the moon and I announce it for all to know.” However, if the lady misquotes her given line in any way, great or small, the gentleman must then yank down her bloomers while saying with a stern voice, “Then is THIS the moon upon which we shall gaze?” The lady shall then retire in disgrace to the fainting couch for the remainder of the evening.