Pure Hell on the Bathroom Floor

I wouldn’t go as far as to say I am “afraid” of bugs. Honestly, I don’t possess a fear of them, and that isn’t coming from some macho part of me that wants to maintain dignity. If I was worried about maintaining dignity, I wouldn’t be telling this story in such a popular arena as this site. There is only one bug that I despise. One bug, that while I do not feel fear toward, still manages to fill me with a great sense of unease and near nausea. The Cave Cricket. 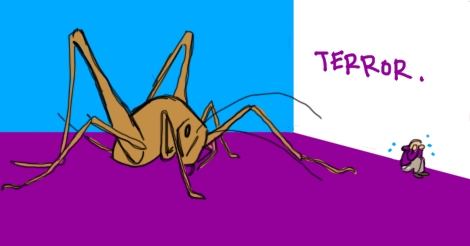 To make things even stranger, I wasn’t even rendered sick by these things until a particular event. Sure I never volunteered to have those rat bastards jump on me…

A quick aside. YES they will jump on you if they damn well please. While most bugs have the common sense to realize you are basically what Godzilla is to us, this one simply does not give a shit. They will latch right on to you instantly, and somehow always aim for the part of you that has exposed flesh. Whether this is some form of attack or the worlds most aggressive defense mechanism, I am not sure.

So yeah, I’ve never been a fan of them but I’ve always been able to handle them. This is North Carolina, and these little bastards will make an appearance every year without fail. Keep as clean of a house as you like, keep your doors shut tight, spray whatever chemicals you want… they are coming. More than likely you will discover it in the bathroom, which I had someone question one time in a great state of confusion, “Billy, why do these things love the bathroom so much? Why are they always in my shower in the morning? Just sitting there in the damp shower in the dark?” Maybe because they are CAVE crickets and that is probably as close to a cave-like environment as they can get without having a bear laying around or bat shit all over the ground. You’ll find them in the early morning hours, usually in your shower. You pull back your shower curtain, and they STRIKE!

I used to be okay with that. I’d flick them off and proceed to attempt a capture. If the capture attempt was a failure, I would resort to squishing. Easy come, easy go. Then The Event happened. I was returning home from a little over a week at the beach. I put my bags down and immediately walked into the bathroom. I will note now that the last thing I did right before I left for my trip was take a nice shower. I will also note that in this particular apartment I was staying in at the time, there was a small leak around the edge of the tub. It was no big deal, it didn’t flood the room or anything, but a lot of times I’d have to drop a towel down to soak up a little water. I didn’t do that when I took that last shower. This was a factor.

I wash my hands and turn around to dry them off… and I see it. I use the word “it” instead of cave cricket. I use the word “it” because the transformation this cave cricket had taken was so shockingly disgusting that it was now more monster than bug. During the week I was gone a cave cricket was apparently chilling out in my bathroom. This same cave cricket for whatever reason died while in my bathroom. As luck would have it, it just so happened to die IN that small puddle of water that formed at the base of the tub. Now I don’t know how long he had been laying there, but the bug was there long enough that all color had been drained away.

All color had been drained away. 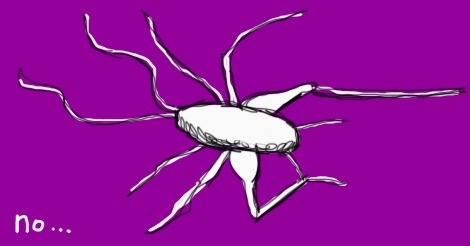 What I was looking at was a cave cricket as white as a sheet a poor kid would use as a ghost costume. White as a piece of paper, or whole milk, or my fucking face when I saw that horror. I nearly threw up. I’m still not entirely convinced that I didn’t throw up with so much force that I completely blocked the act of throwing up from my mind. I staggered out of the bathroom, reaching out wildly for something and clutching nothing. My walk to the kitchen was aided by leaning on the wall, as my legs had decided that maybe dying was the best option for us. I knew that thing had to go, and I knew I was the one that was going to have to do it. I tried to construct a crude retrieval system using a fly swatter and a bowl I figured I could do without, but it didn’t work. Instead of picking it up and depositing it into the bowl, it fell while a couple of feet off the ground, landing hard and I shit you not giving a small jerk. If I threw up twice, this was the second point.

I stumbled back into the kitchen and picked up a roll of paper towels. Usually I would pick up a squashed bug with one sheet, but this was not such an occasion. I proceeded to wrap the entire roll around my hand. Now looking like a half-broke boxer, or an amputee who is extremely nervous about infection, I went into the bathroom to do the job the good Lord had put me there to do. I picked up the carcass. The heavy roll around my hand did the job, as I couldn’t even feel it within my grasp. I raised it over the toilet briefly, but then was overcome with fears of this thing still being alive and being washed into the sewer where it would be nursed back to life by a pack of giant rats, a 20-foot long alligator, and whatever other highly irrational things people say dwell below. He would be nursed back to health and climbing back up through my toilet bowl, and I would just have to die.

I took it outside. I took it way outside. The distance I traveled I would consider a decent-sized walk for me, and a fat person would probably consider it a marathon. I deposited that son of a bitch and proceeded to go back home. I will admit that maybe I was moving a little quicker than a mere walk on the way back.

Ever since then, I can’t stand the damn things and when I see one I either want to throw up or scream. Fortunately, both are activities that you perform while your mouth is wide open so I tend to just do them simultaneously.