Relive the ’90s with Your Very Own Teenage Amandoll 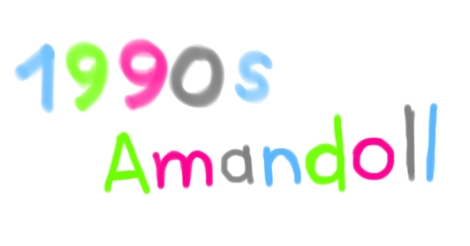 The 90’s decade was a glamorous year for any of us in the teenage bracket. Sure, Seventeen Magazine had “new clothes” that you should buy in order to be popular, but truthfully they were just expensive new versions of the attire the rest of us found in thrift stores, the closets or floors of friends and friends’ family, or, occasionally, pretty much just in the actual street.

What we bring you here, today, is some of that authentic ’90s charm. Actual clothes that I actually wore, and in some cases, still wear against all better judgment. I proudly wore tshirts that I variously found in various places. I did buy Marilyn Manson shirts, though, because I went to the concerts and kept accidentally offending teachers by violating the obscure dress code rules — I almost caused my school to force us to wear student uniforms! “lol”

The pants available here range from blindingly orange to fantastically large boy pants my friend let me have and I had to fold over and hold up with a belt to these pants that were once overalls but I cut off the top part and also dyed them green, when I was thirteen. I still have them! You see my striped shirt that I always wear in comics. I found that in some flea market bin for like a single dollar. I used to wear hats! One belonged to my friend, and one was an actual bowler cap from the 1930s that I was given. I think it used to be my neighbor’s elderly dad’s hat. Sadly, it has been lost over the years. And yeah, I used to wear a lot of necklaces. One was a beaded-flower choker. One was a fancy pentagram because Satanism is hilarious. One was some hemp-string broken thing that I found on the edge of a classroom floor. Another was just a shoe string that I tied onto me and left until it fell off. “Kids” amirite? Stop looking at this string bracelet that’s somehow been on my wrist for nine years.

And what about those “underclothes,” for the purposes of this doll? I am UNDERAGED, pervos! Of course I am incredibly overdressed here. But I really did own these clothes. Again, they actually belonged to other people, but they made their way to my room. I still have those tights. They are silver! Anyway, have fun with this actual new interactive form of paper doll! And if you want to print it out in the old way, the link is beneath the activity. You will just have to figure out where you should put the tabs, yourself.

So sit back, eat some Pixistix with Jolt Cola, put on any generic “90s Alternative Rock Nostalgia Radio Mix” that the internet is full of, or stream old episodes of Blue’s Clues or Ren and Stimpy in the background, or find youtubes of old segments of Mtv complete with bumpers and rad commercials, light a “Night Magic” candle, and dress me in ways my mother always hated! Live the dream.