My spooky review of the iconic murder movie, Clue, fell apart due to the distraction of Yvette the Maid. So instead I’ll do a worthwhile public service announcement and tell you how to avoid a chocolatey deathtrap this Halloween. I won’t lie to you: you can get hurt while trick-or-treating and celebrating this satanic holiday of the damned in other vile ways. Given that I do not find pleasure in celebrating much of anything these days, I am relying on the good folks at www.halloween-safety.com to help me properly explain what a harrowing time is in store for you. Directly lifting quotes from their site means that I respect them, and doesn’t have anything to do with being a lazy writer who is very busy.

“Anytime a child has an accident, it’s tragic. The last thing that you want to happen is for your child to be hurt on a holiday, it would forever live in the minds of the child and the family.” 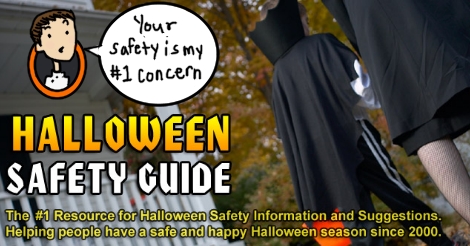 Let’s start with Jack-o-Lanterns. Although the thought of combining fruit, fire, and knives makes me shake with joy, it should be known that these things can be lethal. Gusts of wind can cause flames to occasionally lick out from the insides. To minimize this occurrence, the holes you make should be small. For all you artisans out there, this means that slamming your fist through the front of the pumpkin is out.

You may want to attempt to make a glorious work of art with your pumpkin, using those “carving kits” which are essentially delicate jigsaws that enable you to make precision slices. The end result may be the pinnacle of human achievement, but I’m sure the Nobel Prize Foundation will be reluctant to hand over an award to someone who’s on fire as all of the lattice-work encourages backdrafts from an out of control candle flame.

Try instead going for small triangles, the only shape that can be made both slowly and carefully with a butter knife. Don’t make the face too big! That could cause the overall strength of the pumpkin rind to be compromised and it might cave in, igniting instantly into an unstoppable fire that would consume the neighbourhood and all who dwell within its boundaries. You could also just paint a gourd, but that would require you to have artistic ability and for you to be a middle-aged mother or primary school teacher.

A Special Note on “Electric Jack-o-Lanterns”: These are actually safe, but make it a point to smash them if you see them. Anyone too lazy to carve their own pumpkin deserves to have one of these slammed through their windshield.

With your classic Halloween decorations done, it’s time to consider your costume. A costume would ideally be the way you can show off your lithe and supple body because you have been training hard to get into shape for Halloween season. It can also be used as a fine way to terrify friends and strangers alike, as you transform yourself from a normal human being into someone that might possibly be a killer in disguise, sliding into crowds of unassuming lambs who are ripe for the picking. Similarly, a good costume is one that wins you kudos and admiration due to the mastery you have shown at crafting something that is truly remarkable and/or frightening.

Throw these big ideas out the window, however! Because according to the safety site, all costumes should be boring and within some very safe parameters. Whatever you put on, it should not drag on the ground. That means no ropes, chains, or entrails. Secondly, your costume should be flame-retardant, which unfortunately means no polyester. So if you were hoping to horrify the neighbours by straining the limits of your Saturday Night Fever outfit with your curves and gyrations, think again. Thirdly, make yourself highly visible by carrying around a flashlight. That way if you think you hear a car coming, you can verify your suspicions by shining the flashlight directly in the driver’s eyes. Thanks Halloween-Safety dot com!

Trick or Treating the Safe Way

Another key Halloween danger concerns the intricacies of crossing the street. If you need help, I’ve found an excellent guide which you can read here.

One of the biggest parts of trick-or-treating is knowing which houses are safe to go to. Wandering into a sketchy area could result in an extra air hole in your Spider-Man mask. You don’t want that. Typically, the nice houses have better candy. I say typically, but not always, because you can’t account for people who turn off their lights and put up “go away” signs. Incidentally, if you have to choose between electric jack-o-lanterns and tightwads, I suggest funneling your rage towards the tightwads.

Rival children pose one of the biggest threats. Don’t forget that Halloween is war. If you want that last Rolo, you’d better be prepared to kill for it. You’re not totally defenseless though. You do have weapons, if you think creatively: 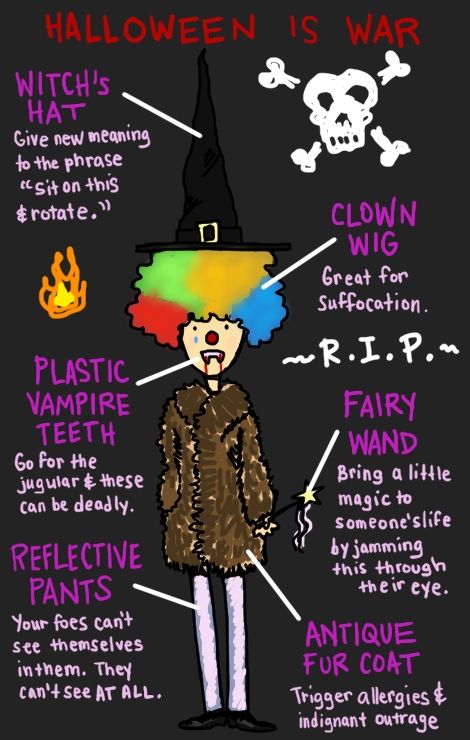 When going into battle, a great tactic is to cover yourself in reflector tape. By blinding your opponent, you’ll be in position to knock them unconscious with your dollar store light saber. Utilize your surroundings as well. That fake tombstone may look useless, but…

Wait, this article was supposed to be about safety, not massacring children.

Funny how that happens.

When you get home with your booty, your parents will probably want to test out the candy to make sure it doesn’t contain pins or whatnot. Most parents of today will have an elaborate Safety Lab set up next to the family Panic Room, and an x-ray machine is a common feature in these places. If you are from a poor upbringing, however, your parent(s) will have to check your candy the old fashioned way: by sampling as many different candies as they can until they become sickened from too much sugar and “feel it is a fair assumption” that the remaining candy is “probably not tampered with.” At first it may seem unfair to have someone else eating your hard-earned goods, but note that after your parents devour half of your candy, they’ll probably guilt-trip and buy you that toy you’ve always wanted. Oh, that’s right, you kids today don’t play with toys anymore. Get them to buy you another one of those smart phones then. Whatever.

There is another risk, but it comes thirty years down the road when all of those empty calories set up shop in your arteries and make you do the cardiac cha-cha.

Have a great time trick-or-treating!