The Avocadogeddon Is Upon Us

I think it must hold true that every great war starts with the most mundane of tasks, somewhere down the line. Maybe Pol Pot saw a cloud shaped like the letter ‘G’ and it inspired him to do a genocide. Maybe Hitler got a bad case of food poisoning and thought, “Screw it, I’m just going to kill as many people as I can find.” My own war began, as I’m sure many others have before it, with me heading to the ‘quick sale bargain’ section of my local supermarket.

I may not know history, but if there’s one thing I do know, it’s a good deal. I can sniff them out from a mile away, usually because they have already partially deteriorated. This particular bargain was no exception – a tray of four dips, more than 50% off the price. Might as well be gold-plated, for that kind of saving.

So I went through the checkout and took it home with some pita bread, for humble dipping purposes. With one eye on my computer screen, I lazily dipped, sampling the wares of the local Foodland. The hommus was good, the tsatsiki stood up to the grade, even the french onion dip was at least average. But soon, I found myself unintentionally ignoring the guacamole. It wasn’t bad, per se, it’s just that I felt my dip attentions were better placed elsewhere. Like the girl at the dance who isn’t ugly, but is still so forgettable that she spends the night standing alone in a corner, crying into her punch. I mean, I’ve always thought that guacamole was better on nachos or burritos, rather than by itself, and that was an opinion I thought couldn’t possibly be too controversial. Or so I thought. 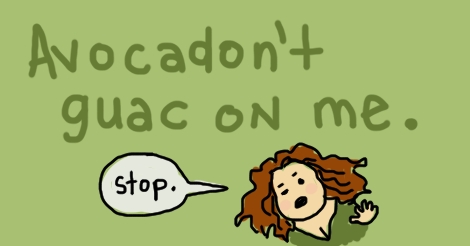 These days, we live in a wonderful world. A world where, for better or for worse, you can express literally any stupid thought that crosses your mind, instantly, to everyone you know. I take advantage of this ability more than most, some might say. And so it was time, for the fourth or fifth time that day. After rubbing my hands together in preparation, I lit up my computer screen with the following words:

Controversial Opinion: guacamole is the most overrated of the dips.

You’d think with that very clear warning, right there in the title, that those of my friends who were sensitive to such outlandish controversy would have stopped after the first two words, collected their bearings, and moved on without reading, for fear of what horrors might lay after that looming colon.

But apparently, people couldn’t look away. I received more comments straight away than I have seen in a while, even some of Facebook’s signature shocked and angry faces! People leapt up to defend the humble avocado, while still more people leapt up to decry its snot-like consistency! I gently reminded the roaring crowds that I merely said it was overrated, and I actually quite like avocados, but that to me guacamole is more of a condiment.

But the debate raged on, with everyone needing to have their say. Avocado based puns were wheeled out like canons, although one of my American guac-doubting comrades pointed out that such jokes were low-hanging fruit. 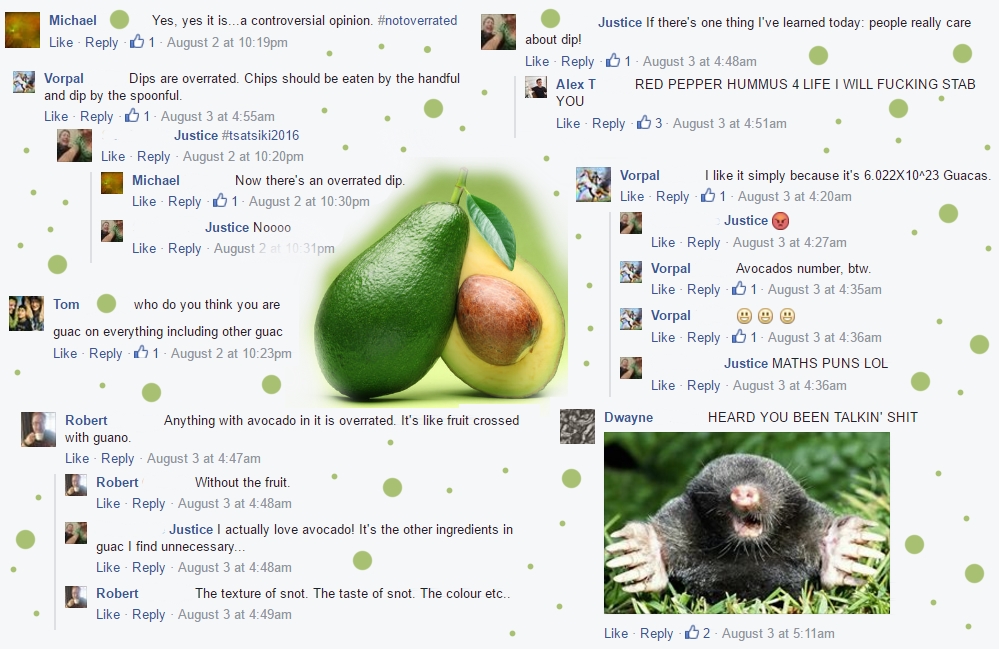 I sat in shock and awe, not knowing what sort of beast I had created. It is rare that I get such a response about anything, anything at all, and here was a significant portion of people going off their nut about a dip. Barely even a dip. Mostly just a fruit, a condiment at best.

You may want to fight me for saying such things, apparently. I suppose I have started a war now. But we guac-doubters can band together. Some people have stated their desire to publicly back me on this issue, and I’m sure there are many more, all across the world. We will form an army, use avocados as weapons, and the rest of you will be so busy scrambling amongst the wreckage for a tasty treat that you won’t see us coming.