As previously mentioned in The Habbo Diaries parts one and two, some of us were recruited into the workforce, for various places, with, well… pretty similar positions. None of us received any wages, in-game or otherwise. Nor did we receive any furni for our time. But we worked. We worked hard.

The purpose of the Habbo workforce eluded me; it was not affiliated with Official Habbo. They were run by people, kids I assume? I also never understood how they were funded. They had dozens of rooms with what must have been hundreds or thousands of dollars worth of furni. I didn’t get it and I didn’t get to the bottom of it. But we tried our darnedest, by spreading out our jobs and expertise throughout the Habboverse.

To join most jobs in Habbo, you first join a group and add a badge to show your commitment. Fancy Important Jobs also require you to change your outfit to an “acceptable” one and remove any hats or hair accessories.

Cchris and Zach joined the Habbo USDF after being recruited by low-level employees in their lobby. They, of course, went to the lobby to be recruited. They did the usual joining groups and adding badges 2 or 3 levels deep.

While following higher ranking Habbo USDF officers through a series of ornate rooms, they learned the rules and were quizzed at each step. They watched the Recruitment Video and learned how to greet officers. Then they learned how to recruit. This was their first task. To sit at the front desk and bring in more people. More Habbo soldiers. 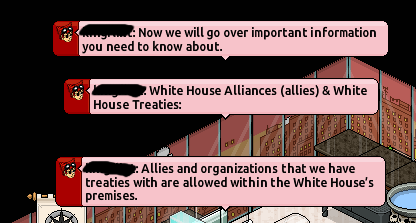 But what did the Habbo Army do? During training, some recruits were sent to the middle of a “war zone” while others seemed to experience a peacetime deployment. I have no idea how this related to anything else. Further into the army, soldiers were taught how to avoid getting banned from rooms and how to dox people.

This is part of what ultimately led to Zach’s “I stand before you today to express my disappointment with the actions of the USDF” speech.

Although I did not get as far in the Habbo White House as they did in the Habbo USDF, I tried my best. Similar to the Army group in both employment and management, the White House was easy to join after just a few minutes. I was most sad to remove my bandana over my mouth and my Groucho glasses, I gave in for the good of our cause.

I got to work at the front desk right away trying for some recruits of my own. For what seemed like a long time but was more likely just a few minutes, nobody came in. There was no one to work my spiel on or even to talk to. Eventually, I did recruit three unsuspecting people.

During my first two days of “work” I was stopped by four different Higher Ranks. Each time I stood up, waved, and typed the appropriate responses to them. Each time I was given an incremental promotion. The promotions consisted of changes to my flavor text on my profile, as well as an occasional additional badge. Each promotion was also marked by who gave it to me, which sounded very trusting.

I learned to man the gate. It seemed very important and involved some additional training. At least as much as the initial training, actually. It was just to teach me who was allowed in and what the procedure was. It was here that I learned of our alliance with the USDF, and realized that our plan could eventually work. 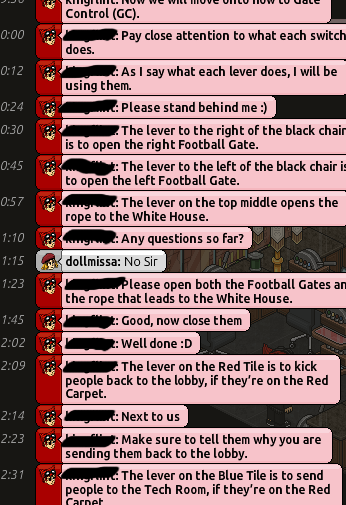 After a series of unsuccessful jobs among us, and after we won a combined 250 credits from Habbo radio contests, we found the place for us. Specifically, the place for us was with Habbox Radio Star DJ Snicks, who played a daily show for 2 to 3 hours.

Snicks was not just our virtual party host but also our pal who may have been about half our ages. We did our best to let people know to tune in, we gave him some furni for extra rooms, and we always tuned in ourselves. None of us won the daily 50c prize more than once, but we tried. Amandoll once won the 100c prize, and we lived in utter luxury ever after. All we had to do was answer trivia questions or try to guess answers to things asked on the show itself.

I was recruited into this scheme for my own radio show, but it never did seem much like a scheme! We were never expected to drag our own posses in and we were not plied with trivial information and silly call-and-response routines. I was expected to do some brief training to learn how to run the timeslot. I downloaded at least 3 pieces of software and registered with each. I skyped with some outrageously weird radio DJs.

Rather than report in for my own slot we went back to Snicks routinely. We suggested songs and themes, listened to him try to rap, and learned about his life. We never did do a radio show, but we made a friend? Of course, then we never went back and all signs point to the fact that he left at around the same time, too. Someday, we expect to run into him again somehow, probably at the hotel, and we will excitedly, repeatedly declare that everything is way litty.