The Haunting at Sheumakee Creek 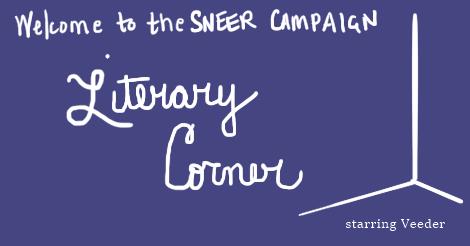 The essential elements of a ghost story are Time and Place. Time, because a haunting represents two points upon that continuum (the past and the present) colliding; Place, because the perceptory functions of the human mind are limited by its particular imprisoning body (until the moment of that vessel’s expiration), which necessarily occupies a single location, a point among infinite points in space. The values of these variables, for purposes of this story, are as follows: Time, the 1980s. Place, Sheumakkee Creek.

Bernice Zelewski, a nursing student, crossed Sheumakkee Creek most days of the week by means of a wooden footbridge, erected some decades earlier. Exiting her apartment on the northeast side of town, she crossed the Sheumakkee Creek footbridge, continued some five or six blocks across town, and arrived at the nursing school building, where she studied and socialized for much of the day before walking back through town to the footbridge, which she crossed before continuing to her apartment building. This pattern was interrupted infrequently by holidays, illnesses, and various other occurrences as prosaic and quotidian as the pattern itself, of walking back and forth across a bridge that spanned only fifteen or twenty
feet — an unremarkable interval that served to separate one unremarkable day from the next.

In winter months, the hours of daylight often came to an end long before Bernice’s classes, and she was obliged to walk home in bitter cold and darkness. This caused her to grumble at first, but soon the dark and cold were as familiar to her as that wooden footbridge, and soon the nights came when she did not grumble. Eventually, Bernice as much as forgot how cold she was, and ignored the eerie stillness of the air.

It was on one of these nights, when the bridge and the cold and even the dark had ceased to be remarkable or even noticeable, when Bernice was at last taken by surprise. As she crossed the Sheumakkee Creek bridge, she looked up and was startled to see a shape — a human shape: a man wrapped in warm clothes crossing the bridge from the other side.

Bernice possessed a certain shyness, or a desire for privacy, that rendered unnecessary her elders’ admonishments not to talk to strangers; indeed, it superseded even the admonishments, handed down from those same elders only a few years later, to treat strangers with warmth and friendliness. Bernice averted her gaze, and quickened her pace toward a cozy bed and a sleep that would erase the man’s appearance from her memory.

But the man did not quicken his pace: He slowed to a stop, and with a motion of his hand and a tentative greeting he succeeded in slowing and then stopping Bernice Zelewski. The woman had little time to think, and although instinct dictated that she should ignore this gentleman’s invitation, she was afflicted in this moment by one of those quirks of psychology (to which we are all at one time or another susceptible) that arrest both the instinct and the higher reasoning of the victim: Her body and mind were fixed in place at the midpoint of the old Sheumakkee Creek bridge, and all that was in her power to do was to listen to the man’s story:

His name was Jeffery Phillips, and he had been born in 1860, in the Kansas Territory. As a child, he had been the subject of and subjected to various inexplicable phenomena: His left pinky, chopped off in a baseball accident, grew back over the course of several days. Numerous strangers, especially the elderly, recognized Jeffery on sight and remembered his name and interests, despite never having met the boy or any of his acquaintances. On some days, Jeffery responded to questions an hour before they were asked. His mother reported that for half an hour or so after he woke up each morning, a luminosity “like concentrated moonlight” shone out of his eyes.

Over the first fifteen years of his life, Jeffery became an oddity, then a wonder, then a sensation, then a cliché, and finally a footnote. Throughout all these phases, the essential qualities of Jeffery’s uniqueness remained constant: It was the interest of his fellow man that wavered (although a true “fellow” to Jeffery Phillips could not be found). But in his sixteenth year, 1876, there finally came into Jeffery’s life an event that could match his own existence for bizarreness of spectacle.

One cold night, as he crossed an anonymous footbridge over a frozen creek, an “infernal conflagration” burst across the night sky, gradually resolving into a dozen or so individual lights. The lights, multifarious in hue, circled Jeffery like wolves, or like vultures. They whirled closer, propelled by invisible impulses. And finally, from somewhere between or among the lights, a sound came:

Jeffery could not react: The lights closed in, enveloped him, and transported the young man far, far away—far from the state of Kansas, and far from the year 1876. 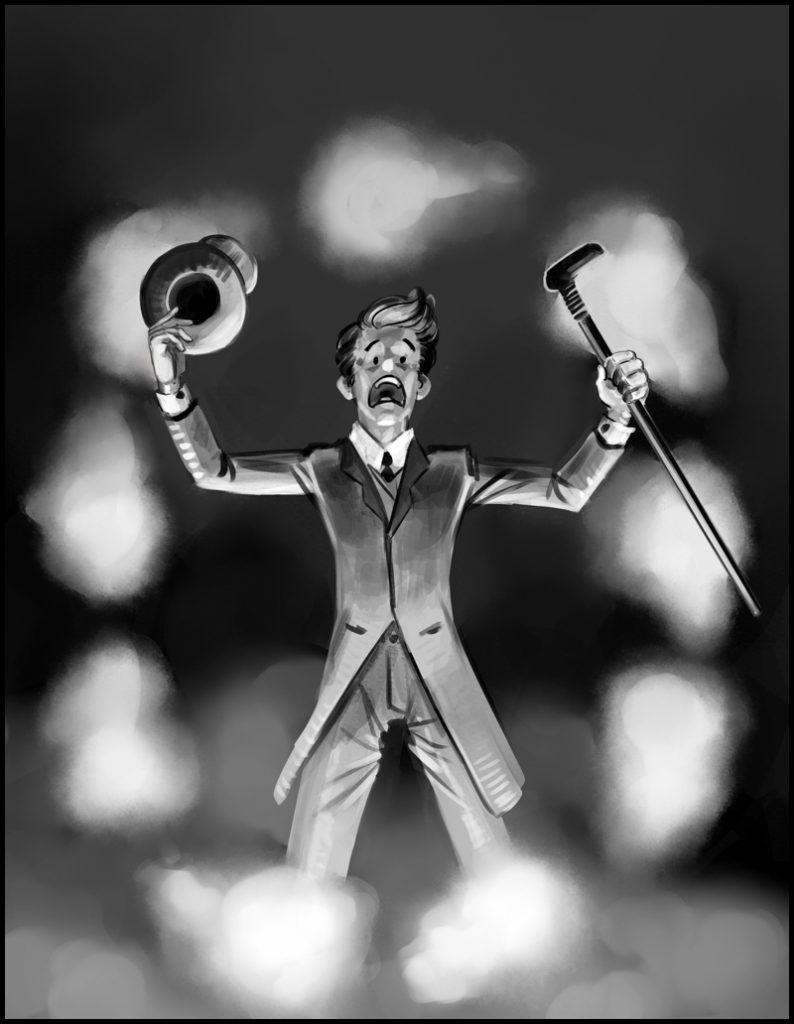 When Jeffery regained consciousness, he stood on the pinnacle of a transparent skyscraper overlooking a city of a million more such structures, identical in their inhuman regularity and colorlessness. Pale rust-green smog curled between these buildings, and Jeffery could not even guess at his distance from the planet’s surface. From out of the smoke rose a creature like a great purple bat, with clawed wings tearing desperately at the acrid air, its tails flapping fiendishly behind it.

\/\/\ YOU MUST REMAIN HERE AND SAVE THE HUMAN RACE FROM DESTRUCTION \/\/\ the photonic lifeform continued. \/\/\ SEEK OUT THE FIK-FOLK OF THE PLANET GICH AND BRING BACK THE EIGHT CYBERKEYS \/\/\

If the photonic lifeform had more demands, they were cut short by the appearance of a Gov-Police-Poly-Copter-Drone, rising silently out of the smog. The GPPCD’s telepathic matrices invaded Jeffery’s mind, ordering him to surrender and be arrested. Jeffery was paralyzed. The GPPCD hovered closer.

The Good Book, in its introductory volume, explains to us that the human race was created in God’s own image. Therefore it can inarguably be stated, without fear of committing any heresy or blasphemy, that each of us, no matter how uncomely in aspect, or vile in deeds, or dull in wit, embodies some element, however atrophied by the foibles and ineptitude particular to mankind, of the Divine. Nonetheless, that same Book warns us against the sins of pride and of hubris, and despite our uncontestable claims to heavenly beauty, we are admonished to ignore, or pretend to ignore, our most admirable qualities; that is, we are obliged to practice humility; and even if we were to meet the standards of humility set for us in that Book, we ought never to admit to our success, lest like Babel the products of our strivings for Virtue be struck down, blasted from the earth, and remembered only as the paradigm of failure.

Thus it is with great regret that I reach this juncture of our story. It has at last become unavoidable that I must forget, momentarily, the great value that my elders through long years of moral instruction have taught me to place upon humility, or else the story in which you and I have now invested so much of our emotional energy and aesthetic energy, respectively, would come to an abrupt and unsatisfying end, for it is at this moment in our drama that my own personage must step hesitantly upon the stage.

You see, having claimed the eight cyberkeys of the Fik-Folk, and having returned them to the Pyramids of Øygart, thereby saving the human race, Jeffery was permitted by the photonic lifeform to return to nineteenth century America, where he at once sought out its most foremost author and storyteller, a gentleman celebrated the world over, though to an extent far out of proportion with his unextraordinary talent. And, having at last arranged an audience with this infamous gentleman, Mr. Phillips proceeded to recount the entirety of his remarkable story as his host leant forward in rapt attention.

Far too quickly was the story ended, and I rose from my seat and applauded mightily.

“Why, Mr. Phillips, you have a definite yarn to tell — and a finer yarn than I have ever set to the page in all my years of writing! You must publish it at once!”

Jeffery Phillips, possessed of infinite humility, looked at his shoes and spoke softly: “I cannot write a word, Mr. Twain, though I have made myself attempt the task more than once. And this is why I have asked to tell my story to you: A man of your talent could certainly make more of my story than could I, and put into handsome print what I can only barely speak aloud.”

“Why, Mr. Phillips,” I said, “You do yourself a host of injustices — But the world must hear your yarn at any rate, and if I must tell it from the pulpit afforded me by my immeasurable success, then I must. I will insist, however, that the frontispiece of our collaboration declare that the narrative within is that of Jeffery Phillips, as told to Mark Twain, and thereby ensure for you the praise that is due your heroic deeds.”

This arrangement was to the liking of my interlocutor, and we shook on the deal before I called my manservant Ninian to summon such refreshments as would suit so auspicious an occasion. I called out his name twice, the second time with a volume and cadence unworthy of a man addressing his fellow man, but brought on by a twinge of ungentlemanly impatience.

When at last my calling was answered, it was not Ninian who appeared, but Nils, my reliable Swede.

With some consternation I demanded to know Ninian’s whereabouts. In a meek voice, and with eyes shifting uncomfortably, Nils made to me a most unsettling revelation, the details of which I will put to paper now:

It was a dark, cold night, and Ninian was walking alone down an old and unlit road. As he passed beneath the boughs of great old trees—invisible in the darkness—their shadows blotted out the stars one by one—until there was no light, not even the light of the moon.

In this stygian landscape, only dimly aware of even his own body, Ninian thought he heard a noise—a growl—an animal. Ninian’s heart leapt in his chest — his pace quickened — his eyes darted to and fro.

The noise came again! Ninian broke into a sprint. He strained his ears to hear if the beast was pursuing him—he could only hear his own noisy footsteps — and the beating of his own heart. He ran through the woods, hoping he was staying on the path.

The noise came again—a screeching, keening growl, so close and loud that Ninian tripped over himself and fell to the cold ground. He turned over to see his predator — It was a little cat! Ninian goggled in shock at the tiny animal, and after a moment he laughed at himself for feeling such terror in its pursuit. He could have reached out and scooped the creature into his arms —

Ninian scrambled to his feet and ran. He was half-blind in the dark, but he no longer cared whether he was on the path. The massive footfalls of the giant cat sounded like peals of thunder through the frigid air. Ninian ran faster than he had ever run in his entire life. He ran through the woods, leaping over trunks and stumps and patches of thorny briars — until he came to a gully, a wide ravine worn by an old creek through the black soil of the black woods.

With nowhere left to run, Ninian ran at a superhuman speed right into the gully — he fell into the creek — and died.