Recently, Tuff Ghost went missing and Junior Sneerist Fran went around the neighborhood with some flyers looking for the little guy. It was a fairly huge ordeal involving animal traps that caught everything but Tuffo, sightings of him right next door, and three weeks of searching. However, Fran didn’t find Tuff Ghost. Instead, he found a ghost. 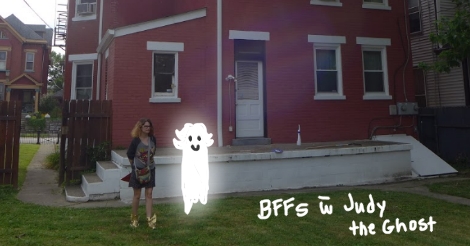 Of all things, Fran spoke to a young girl, or the ghost of a young girl maybe. There were a few people discussing the lost cat, which of course is very exciting and sad to a small child. She asked Fran, “where does your friend live?” I assume meaning Tuffo, which was a very adorable thing to say. Fran told this small ghost our home address and she said:

Now, we should point out a few things already. When we bought the house, in 2016 there was a family living here. There was no eight year old girl. There was a very crazy old woman on the second floor and her grown adult son on the first. The son also had a child, a boy who was in high school, but he didn’t live there when we saw the house. Also, ten years old seems too young to have known Judy “No Scrubs” McGhostly. The song, for the record, came out in 1999, and was even released on cassette tape. We know it is a timeless classic, but it also seems highly unlikely that a troubled teenager would be scrawling on walls about it in the 2010s.

But Fran is a gossip sleuth just like we’d hope. After all, he is our friend. So he turned to this small otherworldly being and asked her point blank if she knew Judy.

“Yes. She stayed there but didn’t live there. She was upset a lot.”

Well, that does seem to be the case, judging by the furious handwriting all over that attic room. Judy was definitely living her teenage angst to the fullest. She made a closet full of boys’ names paired with her own, some had hearts, some had X’d out hearts. Some had, somewhat cynically, notes that she loved them “for now.” Normally these declarations belong on a school folder, not a gorgeous old house’s walls and doors. 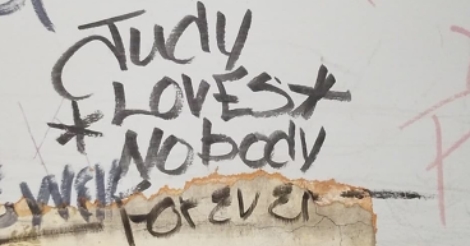 But what does that mean? “She stayed there but didn’t live there”? Was she a visiting neighbor who rudely graffiti-marked a room that wasn’t hers? Some of these doors have locks on the OUTSIDES, and that attic bedroom door had a panel kicked out, repaired badly, and then written over. Please tell us she wasn’t staying here against her will. Was this little girl Fran spoke to actually alive and was just a toddler when she lived here? Was she interacting with a ghost named Judy? Maybe the little girl was murdered, too, who knows. Two ghosts? Why not.

Like all good gossip and mysteries, this one has again left us with more questions than answers. Too bad we will probably never see that little girl again — because Fran went home to California, and also because she obviously probably followed the light after that encounter, her work here on Earth completed.