Trying to Enjoy Board Games

The other day I went down to my basement for some hot Duck Hunt action. As usual, the NES just blinked and wouldn’t let me play, like it does every time since that beautiful day it created a small carpet fire from being on for two days straight. But I really didn’t want to make the trip upstairs again, so I looked for something nearby to occupy my attention for an hour or so. After a few moments of looking around, some boxes caught my eye. Hurrah! Nothing says “fun” like random old boxes! But as I came closer, I realized that these were no ordinary spider-infested cardboard boxes. No, to my shock, these were a bunch of old board games. I figured these would require special attention, so I found the nearest rickety chair and pulled out the bottom game from the dangerous, towering stack to see what awaited me. 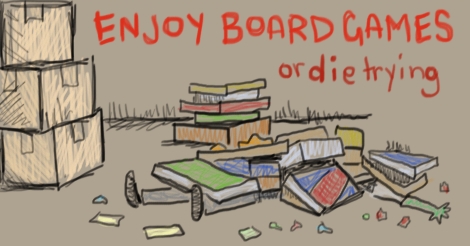 When I regained consciousness, lying in a pile of little coloured houses and paper money, I found that I had stumbled on several of my very favourite board games that I owned when I was a child. I looked at them and wondered why I had ever stopped playing these cherished games of mine that I had grown so attached to before my parents gave in and bought me a Nintendo. The other kids may have mocked and ridiculed me, but the fun I had with these board games were more than enough to drown out their hurtful words. Well, most of them anyway. Looking them over, my brain filled with memories and I immediately starting playing every game I could find until I became tired and jaded — even MORE than I normally am!

I remember this being a pretty neat game. You move your pest mouse around the board and if it happens to be on a certain square, it’ll get caught. The television advertisements for it were fairly hectic and filled you with a fanatic enthusiasm, finally, you could be the Tom capturing that Jerry. You could be Scratchy getting revenge on that awful old Itchy. And you could do it all in ways where you could pretend that you are a mastermind of Rube Goldberg machines. You rarely see deaths this unnecessarily elaborate outside of cheesy ’60s spy flicks.

Why I Stopped Playing: I lost the crank that kicks the marble that rolls down the chute that moves the hand that drops the marble into the tub that flips the diver into the pool that triggers the cage that traps the mouse. (It’s just not the same without it.)

That Game Where Sharp Plastic Pieces Fly Into Your Eye

I can’t even remember what it’s called even though this is all fresh news, but it doesn’t matter what its name is. You have different shaped pieces and you have to stick them in the right slots before the timer runs out, or else they explode everywhere. The combination of the timer ticking and the sounds of plastic being frantically shoved into shapes that are not the right ones can induce panic attack in some frail types. It’s a pretty fun game I guess until afterwards when you have a big mess to clean up. It’s a lot like masturbation, only with much more satisfaction if you win.

Why I Stopped Playing: In a giddy frenzy, I rammed pieces into the wrong slots, permanently breaking some of them. But that didn’t stop me. I continued to play, and my new cheating strategy was to hold the dial so that the time wouldn’t run out. Then the dial snapped off. I was such a stupid child.

I first remember playing this when I was six or so. I thought it was the coolest thing ever. But the odd thing about Guess Who! was that the people seemed to come from some sort of alternate dimension where there are tons of bald white men, few women, and no minorities. It’s nice to see Milton-Bradley giving their games the “corporate touch.” Guess Who’s controlling the economy!

Why I Stopped Playing: You can only ask “is your person wearing a hat?” so many times before your head starts to swell.

Operation is practically as old as time itself. It’s also a nightmare for people suffering from Parkinson’s disease, or anyone that does not have the steady hand of a dead person. For those of you who spent your childhoods bereft of educational diversions such as this, let me explain how the game works: little openings filled with plastic pieces are rigged up to an electric buzzer thingy. You have to pick the pieces out of the holes using metal tweezers while you pretend that you are in a high pressure emergency operating room. If you press the tweezers against the sides, it buzzes, signifying that you’re a crappy doctor and have imperiled the life of your patient. This game single-handedly dashed the hopes and dreams of millions of children around the world. 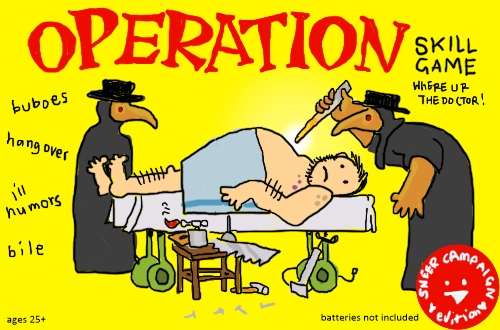 Why I Stopped Playing: I tried doing a rib-to-knee transplant that lasted fifteen minutes and lost my patient, again. Also, it ended with a blown fuse and a headache that produced a constant buzzing noise in my head for two years.

This run-of-the-mill board game came with a cheesy videotape. When you begin playing, you pop the tape into the VCR and a zombie demon guy would appear onscreen every so often and tell you to miss a turn or kill another player or buy a vowel or whatever. It was hard to take him seriously. Not only was he gayer than fudge (taking into consideration that fudge is very gay), but his makeup was bad as well. In Atmosfear, you also get to choose from a delightful array of characters, including a mummified televangelist, a werewolf, a girl’s corpse, a gang of cowboy skeletons, and good old Elizabeth Bathory, slaughterer of virgins. Sure beats the shoe from Monopoly, which I also broke somehow.

Why I Stopped Playing: I apparently used the videotape to record the “Animals Don’t Wear Underpants” song from Bobby’s World, thereby ending the shenanigans of Zombie Richard Simmons.

Anyone who says sharks are smart obviously never played Shark Attack. This was one of those games that looked so good in the commercial, but ended up being about as fun as eating bottle caps when you actually bought it. I can still remember the thrilling excitement as the mechanical shark malfunctioned and attempted to eat through the cardboard playing area. My God. It’s not a hard task to move around in circles, you piece of garbage. Other times the shark would attempt to eat the little plastic fish, only to get them caught in its jaw and which would cause it to veer wildly off course.

Why I Stopped Playing: I hurled the shark at the fireplace.

Everyone’s favourite game of gluttony makes a glorious return! Long before all of America became ungodly fat, you had to shell out $30 or so to watch these obese monsters fight for food. Now you just have to go to Jack-in-the-Box. This game was all about pushing the little lever on the back of the hippos as fast as possible, extending their necks to wild lengths, all in an attempt to make them swallow the delicious glass marbles flying around the board. Unfortunately, if you were playing with the suggested age groups of 6 to 7 year-olds, most of the marbles would end up in a different room, as you all slammed the lever down with the ferocity of a man fighting for his life.

Why I Stopped Playing: I choked on a ball and my parents took it away. Damn them. I should eat another one right now just to get revenge.