Vampira, Some Sort of Gothic Goddess

On December 11th, 1922, a huge black bat dropped out of the sky and left a smoldering crater upon impact. Emerging from the smoke was none other than Vampira, fully formed and ready to present herself to the public as a mistress of the dark, put on this earth to provide ghoulish puns and introductions to bad televised horror films in the 1950s.

Her fame might have been fleeting, according to this Wikipedia entry, but her legacy is eternal. She was an inspirational figure to anyone who has ever loved dangerously arched fake eyebrow lines and a waist that is so small that it defies logic and reason. Her waist, supposedly seventeen inches around, belongs in a Lovecraft story that loves to not-describe the indescribable geometries of things which are cursed. Her waist could bring on madness, and that is what happened to me after I saw a random simple picture of her today, which I will draw for your amusement so that I am not infringing on a photographer’s copyright. I am not exaggerating her angles in any way.

Vampira! How! Did you not have organs? Could you eat? Inside, were you simply a few scoops of sawdust and faux-Satanic prayers? Whatever the cause and whatever the circumstances, hearing that she had a seventeen inch waist caused me (in a fit of insanity) to measure the Captain, who, with his twenty-one inch barrel, would split her precious black garments if he tried to wear them. The Captain is bigger around than at least one adult human woman who has existed, and I told him that to his face. I measured him, and told him that while drowning out his meows requesting kibble. And there is the story of how I wound up drawing the dumbest thing I have drawn all year. 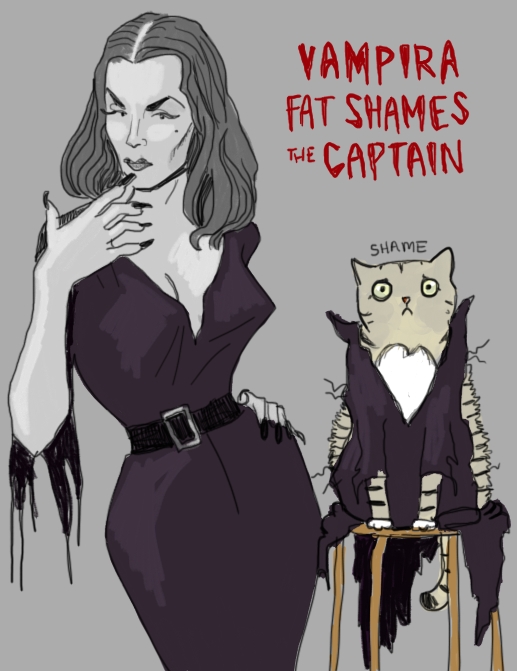