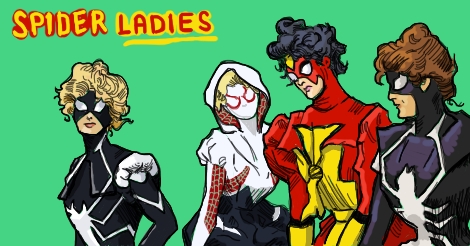 If you’re familiar with men and familiar with spiders, you’re probably no stranger to Spider-Man. However, if you don’t follow comic books regularly you might be surprised how many women have worn the spider-y mantle. Today is your lucky day where you’ll get to learn how cool they all are, and ways in which they’re more interesting than the classic* Spidey you might recognize.

So where does her Spidery-ness come from? Well, originally she was a spider that evolved into a person, but that seemed implausible for the 1970s according to Wikipedia. Instead, she had the memories of a Spider implanted into her.

Key Difference: Her resume is deep. She’s worked for most of the acronyms based in the Marvel Universe and even the Avengers. She speaks several languages (because why not). Spider-Man on the other hand, has primarily been a reporter or a stand-in when other heroes weren’t available (his stint on the Fantastic Four for example). Spider-Man perpetuates his own resume at the Daily Bugle by selling them pictures of himself.

So where does her Spidery-ness come from? Julia Carpenter wasn’t bitten by a radioactive spider, but instead was part of an “athletic study” where she was injected with something that gave her powers. In addition to wall-crawling and the like, she can see into the future and has a level of clairvoyance. Those are unrelated to Spidery-ness, but make more sense than Peter Parker’s Spider-Sense. If spiders had Spider-Sense to keep them safe, the world would be an absolutely terrifying place.

Key Difference: Spider-Woman loses her own eyesight to gain those mystic/psychic powers. Even while blind, she’s a dangerous hand-to-hand combatant. Spider-Man’s most notable hand-to-hand combat was as a pro-wrestler, against regular dudes. If you can’t do that, you’re not qualified to be a superhero.

So where does her Spidery-ness come from? Essentially, she was caught in between a gang fight between rival insect based super-gangs. When mortally wounded, a member of the Spider Society gave her a magic tattoo. She’s only been around since 2004, which is basically no time in comic book time, and hasn’t had the opportunity for any writers to tell award-winning stories with her. On the bright side, she’s half-Mexican, half-Puerto Rican, so there are probably some great jokes using those cultures, unlike Spider-Man’s sometimes Dad-humor.

Key Difference: Spider-Girl was nearly mortally wounded and also got a tattoo on the same day. That’s a conversation that no high schooler could possibly enjoy having with their parents. Spider-Man was bitten by a bug – no one is going to ask you twice about that!

So where does her Spidery-ness come from? She was bitten instead of Peter Parker in her universe. This seems like the most boring beginning of them all, to simply gender-swap the Spider-Man origin. Oddly, their identical origin gives her an intense amount of room for growth.

Key Difference: Peter Parker is characterized by the death of Uncle Ben and Gwen Stacy. Gwen Stacy feels deep guilt she couldn’t save Peter from becoming the Lizard, but those who mind her being a spider in the city present a more interesting problem than Peter Parker faces. She’s in a band. Her conflict with her Dad isn’t something adolescent – he thinks her alter-ego is just a no good vigilante and he eventually learns who wears the mask. Having to confront your parents about what you want is a tough lesson for people of all ages! Gwen is trying to get her life together – something that Peter Parker seems to have had an unrealistic struggle with in spite of (perhaps because of?) his powers. Where Spider-Girl is a relatively new character, the same is even truer for Spider-Gwen, but she’s been one of the characters Marvel fans have been most excited about in the memorable past. The kind of deep stories that Spider-Man was known for are going to get written with Spider-Gwen for a new generation, and give young girls a superhero to enjoy with a familiar set of powers. 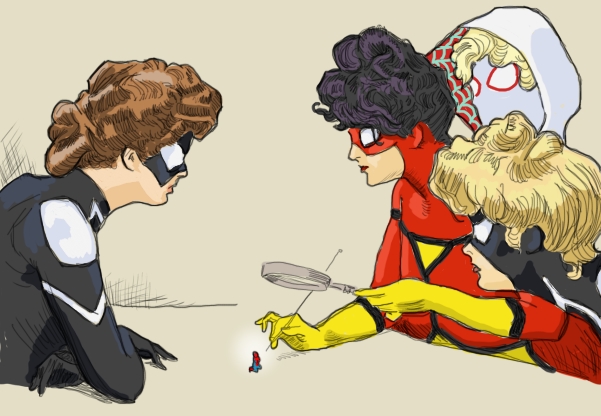 The lesson: if you try your hardest to retell a good story, it can go either way, but you’ll never learn unless you try and try again.

The reminder: girls can do things just as well as boys, but it’s tough to compare the most successful boys to everyone in their career field (Spider-heroes).