What of This Humpty Dumpty?

The literary world is rich and full of wonder. I know that we are all avid readers of fine books and voracious readers of fine periodicals and delicious websites that offer fine journalism such as the one you are reading right this very minute. Reading what has been written is a joy that every literate person takes pleasure in, and if you know of anyone who is illiterate, why not be their hero and teach them to read? Or donate to charities, because everyone loves donating to charities!

Anyway, I am here to talk about a nursery rhyme. Adults often overlook nursery rhymes in the Land of Literature. We memorize them when we are very small, then cast them aside once we can comprehend child fictions about riding horses, or little books about not being afraid of the dark, or not being afraid of failure, or owning and riding dinosaurs, or having imaginary friends. But those first nursery rhymes are very important for us as tiny youths, and we probably still have most of them buried away in our brains, ready to be recited at the drop of any old hat anywhere.

The subjects of a lot of these nursery rhymes are actually kind of creepy. We have all heard about that one rhyme really being about the bubonic plague horrors and everyone dying. There are others too, so it stands to reason that pretty much all of these rhymes are based on adult themes and death and destruction, or in the case of that disgusting Georgie Porgie – date rape.

Recollect with Me the Story of This Horrible Man Egg

Humpty Dumpty sat on a wall

Humpty Dumpty had a great fall 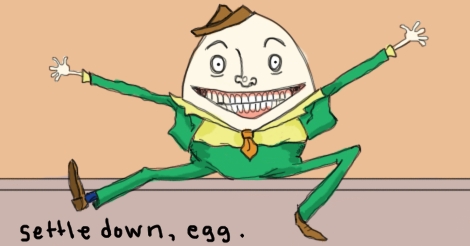 A tale as old as time: a clumsy man has a tumble and shatters into pieces and for some reason it is of great concern to the kingdom’s people and horses and they couldn’t save him. He dies. Like all great stories, this one gives us more questions than answers, more inner conflict than satisfaction, more confusion and fear than anything else. Wait, that is not the stuff of great stories at all! These four lines have just caused me more personal strife than any four lines I can think of right now − EVER. FOREVER. Who wrote this tale? Were they demented? Please don’t let this be based on any historical fact.

Originally, I had hoped that, like many nursery rhymes, I only knew some of it, and that older verses had been lost in the mists of time − or at least most nursery books just discreetly left them out, because they detailed in unsubtle ways things that would upset minds, young and old alike. But a quick lookup reveals that this is simply not the case in this instance. Why God? Why?

Nowhere in the original verse does it actually state that Humpty Dumpty is an egg. Well, originally it seems like the rhyme was meant to be a crazy riddle, and the term “humpty dumpty” meant some bumbling oaf – HEY WAIT THOSE DON’T SHATTER WHEN THEY FALL SO IT MUST NOT MEAN A REAL HUMAN BECAUSE REAL HUMANS BOUNCE! But why an egg? Why couldn’t they have meant a Teacup Man, or a Man Made of Glass? Why must it be a danged EGG?

The answer is, of course, to frighten children.

No child wants to see the horrific illustrations of an egg-shaped man with slender legs and a nightmarishly large face. Children are horrified to imagine a man-egg who is so fragile that he will DIE if he falls, and yet has no sense of self-preservation, so he can frequently be found sitting high atop a wall, wobbling around and being a nuisance to himself. This character of course features in many films and stories for children, and every time I encountered him, I felt sickened by his appearance, and even more sickened by how he always had to die. I believe that Man Egg had a death wish, and I could not blame him. Also, he was always a man-sized egg, and not an egg-sized man-egg. WHY?? 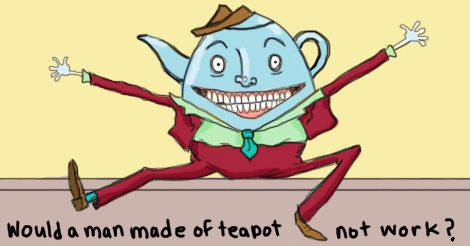 Tell Me More of These Horses

For some reason left unexplained by the original author or team of skilled writers, this horrible Egg Man was a very important man indeed. When he falls and cracks open, his yolk and organs having splattered all over the jagged rocks below, ALL of the King’s horses and ALL of the King’s men rush to the scene to try to save him. One would assume that the King himself informed his army (I am just guessing that it is a reference to the military and not just all of the equines in the kingdom and all of the menfolk citizens, but who knows, I guess − NO DETAILS WERE PROVIDED) to make sure that Humpty Dumpty remain alive. I wonder how many heads were lost that day when no one could save him. How many panicked and tried to flee the land when they realized that they had lost him and could not stop him from climbing that wall and sitting on it?

HOW MANY LIVES WERE LOST ON THAT FATEFUL DAY?

And why did they try to get even the horses to put him together again? Horses basically have single-finger legs and that means that they are even less dexterous than dogs. I think even seals would have a better chance at using their flippers to piece together horrific bloody eggshells. Horses are notoriously flighty under stress anyway, so why expect them to beat the clock and do some medical miracles? Were times so different back then? Are our horses of today slacking? My god. Could it be that horses were helpful and handy with their hooves until the Humpty Dumpty died and from that day on they just gave up? That his death caused them to step back and just become pretty beasts of burden, depressed and trying to feel content on a life of oats and slavery? King, what kind of unreasonable monster were you? 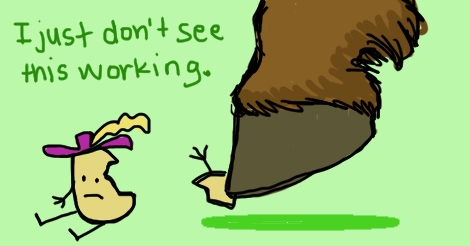 It is my belief that there were more verses. Verses which explain that Humpty Dumpty was the King of Eggs, and that is why all of the horses and men of the army were trying to save him. They were HIS men and horses, and they were simply trying to save their beloved clumsy king.

Humpty Dumpty, the King of Eggs

Had a wide face, and slender man legs

Much to the concern of his great nation,

He had no sense of self-preservation.

While that does not FULLY soothe me, as the notion of there being a world of hideous, thin-shelled egg people does not sound all that wonderful, it goes a long way to at least explaining away some of the confusion. From now on, in fact, even though I just wrote that new verse myself, I am going to pretend that I just tapped into some sort of Universal Mind Fact and saved the day.

Although I must admit that there is another version floating around in my mind that explains that Humpty Dumpty really was the King’s beloved handicapped son and that the original verses were thrown out because book printers wisely decided that children would be less traumatized by the death of a wretched man egg than by the bloody splatterdeath of a painfully disabled child.

Humpty Dumpty was all red

Humpty Dumpty was quite dead

Up rode the King and he wept all day

For his precious son was taken away.

I think I am still going to be sick.