Might I suggest, for both of these things, 1987’s A Nightmare on Elm Street 3: Dream Warriors. 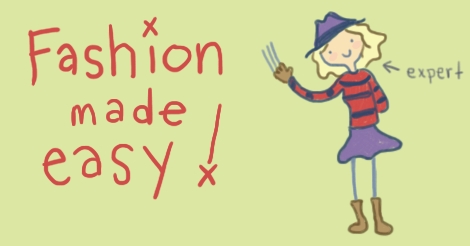 This movie is about a group of teenagers who have been committed to a psychiatric ward because they keep having nightmares about Freddy Kreuger, who is a kind of ghost, I suppose, who appears in your dreams and then tries to kill you. They must learn to work together to defeat Freddy, and they discover that when they are dreaming they each have special powers that relate to their personalities. They become the DREAM WARRIORS.

They also wear some nice outfits, which I think would look good on you. 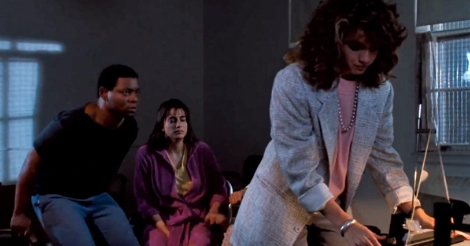 Nancy Thompson was the protagonist of the first Nightmare on Elm Street, and she returns in Dream Warriors as an adult, with a job as a dream researcher and a more mature wardrobe.

In this look above, Nancy pairs some tapered trousers and a pink sweatshirt with a loose grey blazer, and she is totally killing it (pun intended, sorry).

An oversized blazer is a good piece to include in your fall wardrobe. You can put it over the top of just about any outfit and people will think, ‘this person means business’. You will be warmer, too.

Throwing a casual sweatshirt into the mix really makes the perfect combination. Imagine you are wearing a nice sweatshirt, but there is a cool breeze. A little too cool, maybe. Now you put a blazer over the top. Perfect. You are so comfortable now. You did a good job with your fall look!

This blazer and this pink sweatshirt with bell sleeves are 100% Nancy Thompson. I would pair them with jeans and suede loafers.

This is an outfit that says, ‘I am here to be taken seriously, but if at any moment I need to fall asleep, I am ready.’ 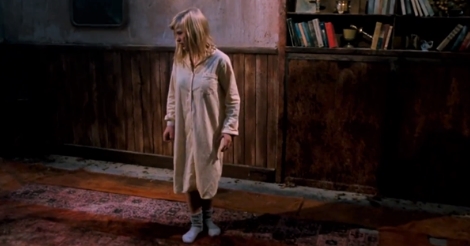 Kristen Parker (played by Patricia Arquette!) is the first character we see in Dream Warriors. She’s making a popsicle house to try and stave off sleep (and Freddy’s attacks).

When she gets her dream powers, she becomes an incredible acrobat, and her wardrobe is pretty flexible too!

I think this lemon yellow one, above, is my favourite. It’s so big that Kristen looks small and vulnerable when she wears it, but honestly, if I was going to have to face Freddy Krueger, I would want my knees to be covered too.

This shirtdress might not be lemon, but you’ll feel ready for your worst nightmares when you wear it. This one is a nice, sunny, yellow, to remind you of the sun, which you will see if you survive the night.

The socks are a good choice too. They steer the look away from ‘grandma at a nursing home’ and towards ‘cute girl sneaking out to the library after curfew at her dorm’.

I don’t think I’d like to walk around in Freddy’s dreamscapes in just socks, though. I feel like the floors would be wet. If you’re going to go with this as your New Fall Look, I suggest adding a cute pair of casual oxfords. 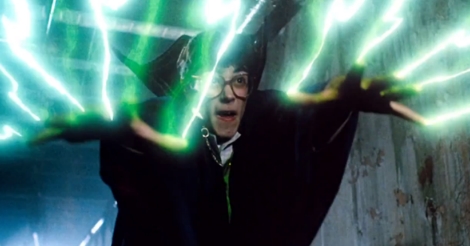 Will Stanton has been confined to a wheelchair after a nightmare-related incident prior to the events of the movie. When he becomes a dream warrior, he channels his love for Dungeons and Dragons to transform into a powerful wizard, and delivers the best line in the film:

The ultimate example of high-low dressing, being the Wizard Master for some reason entails wearing a huge, boxy Dracula cape over the top of check pyjamas.

That is a tough look to pull off, Will. I respect that.

Maybe you’re not as confident as Will, and you don’t want to go full Halloween for your staple fall look. That’s okay. Instead, why not try pairing a cute longline cape with a pale flannel shirt. Add some ankle boots with a pointy toe to make sure you keep that fresh ‘Wizard Master’ vibe. 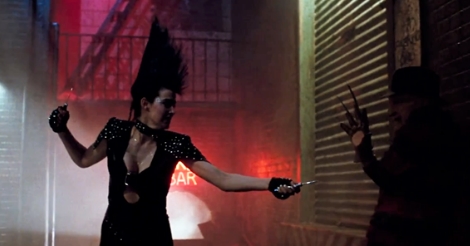 Taryn White is a recovering drug addict, whose dream powers give her a (kind of awkward) mohawk, a cute punk outfit, and two knives.

It’s probably not the arsenal you’d choose if you had to take down Freddy, but she gives it all she’s got.

The two things that stand out to me about Taryn’s dream warrior outfit are her buckled bralet (which is good), and her liberal use of body glitter (also good!).

I remember being mildly obsessed with body glitter as a teenager, but I don’t remember ever actually using it. Taryn has used a lot of it, and it looks nice. If you want to go with Taryn for your New Fall Look, but feel like two knives might be slightly over-committing, consider wearing some body glitter next time you go out.

To really channel Taryn, pair you glitter with a little buckled top and these distressed shorts, which look like Freddy has already got to them. Remember to wear tights as well if it is cold. This is a fall look! 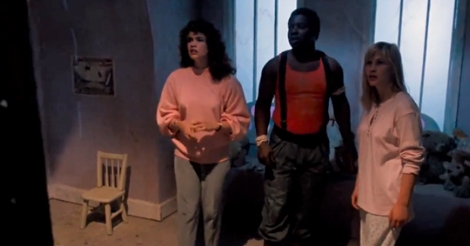 Roland Kincaid’s dream power is super strength, which he uses to produce one of the best outfit reveals ever seen in a movie.

Throughout the film, Kincaid mostly wears fairly basic outfits; blue jeans with black t-shirts or cutoff sweatshirts (both excellent fall looks in their own right).

But while Nancy and Kristen are in the dream world, they’re surprised by someone literally punching through a wall in the room. It’s Kincaid! And look at what he is wearing!

Suspenders, a bright red tank, and matching red high tops! He looks so good. Like he is about to punch someone in a video game. I feel bad that I am not already wearing this outfit. If you make this your fall look, can it still be mine? I hope so.

Maybe you can wear it on odd days of the month, and I’ll wear it on even.