There are all kinds of cat breeds out there in the world. I pretty much have only ever known fat domestic tabbies and tortoiseshells, maybe the odd Maine Coon Cat here and there, but there are so many kinds! There may be as many as 73 different breeds, according to the internet. Mostly, the cat shape remains the same with variations in size or fur and eye colors. Some cats are strange with less ear or leg or absence of tail or fur. In fact, it is the hairless cat which, to me, is the strangest of all. (For the record, to me, the saddest of all is the Munchkin because I believe that cats should be able to jump anywhere they want, including places they are unwanted such as on top of a refrigerator or bookshelf).

But today, I’m looking at the Sphynx. 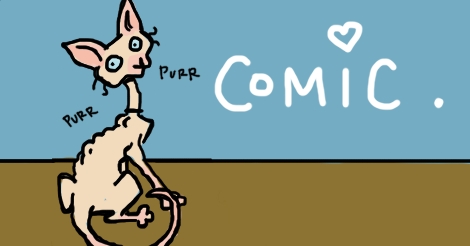 Hairless cats make me uncomfortable. I never really thought about them very much until about eight years ago when I was living with just the Captain, and getting used to life with a cat. I never really liked cats all that much before then. I had started to notice that cat faces and human faces resemble each other more than the faces of other animals, and it made me feel a little creepy to think about it. Like they are just little fuzzy alien people who are also massively destructive death machines. Then I saw a hairless cat and it look like a terrible tiny mutant human with a tail and no collar bones and I was grossed out.

Then I made this little comic for the website I was working for at the time! I redrew it for Sneer Campaign though because golly I used to not draw very well! Also it was extremely tiny for some reason. Plz enjoy my strong opinion on this issue.