Garfield is an interesting character. He was made famous by newspaper comics, back when those were a thing. (Just kidding, newspapers!) Were the comics good? We won’t get into that. The internet has strong feelings about Garfield comics, primarily when you remove or add a character. Right, nerds?

Garfield and Friends, however, was a masterpiece. This cartoon took us on a journey, pretty much only to be matched or surpassed by the glory that was Muppet Babies. 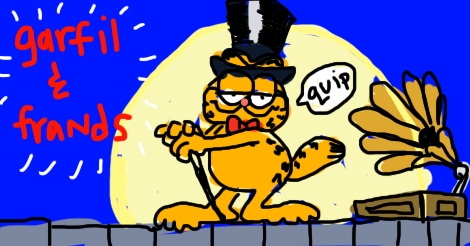 The show had two different main theme songs. I personally love both, but I’ll never forget We’re Ready to Party (we’re ready!) for the rest of my life. I will be on my deathbed shouting “I hope you bring lots of spaghetti!”

The other song was this adorable little ditty about friendship. Awww. This was the best one, regardless of my enjoyment of shouting about spaghetti.

Okay, there was actually a third theme, with RAPS, but that is not really replayed on TV or anything for some reason. Okay, so it’s not really a rap, but it definitely is terrible. I’m glad that it was only the theme for one season (7) and they have basically abandoned this travesty.

Oh Garfield. I think that I have an obligation to mention Mondays and lasagna. But we all know that the real star of the show was Jon being depressed and Garfield not giving a shit. Oh, and torturing Odie. Even though Garfield did not shy away from his hatred of the start of a week and his love of pasta foods, he was not as generally dour as he seemed in print. This children’s show Garfield seemed to be a lot wackier and given to comedic happenings of all sorts. In between the short episodes, there would be tiny vignettes that were taken directly from comic strips, which used to thrill my little heart at the time. “I read this one in a Garfield Comic Collection!” I would excitedly announce to no one.

There was a lot of Nermal in this show. I used to always think that Nermal was a girl kitten, but it is a boy! I was reminded of this today and shocked for the dozenth time. Immediately after telling you this fact, I am going to go back to my better reality where Nermal is a girl and Garfield is one of those guys who hates cute girls and wants to send them to fend for themselves in Abu Dhabi. Upon reflection, this probably shouldn’t have been called Garfield and Friends, but rather Garfield and Beings He Despises As Well As Animals That He Doesn’t Even Know Because They Live on a Farm Somewhere Else.

The real gem of the show was U.S. Acres. U.S. Acres was also a comic by Jim Davis at the same time as Garfield. I never read that comic, but the show was stellar.

U.S. Acres featured Orson the pig and his barnyard friends. They went through some wacky hijinx and there were morals and jokes and puns galore. Orson was a good-hearted pig, always trying to do the right thing in the midst of chaos. His main antagonist was Roy the Rooster, a loudmouth hothead if I ever did see one.

Wade was my favorite as a kid. He is a duck who is terrified of the world around him, everything in it, and even himself sometimes. He wears a pool floaty tube, which Amandoll insists I would need as well if I went swimming. Wade is too scared of water though. I guess he wears it in case of flash floods. The second best part about Wade is that his floaty has a little duck head that makes his every expression in unison with him. That was an odd detail that obsessed me a little every Saturday morning as it occurred. 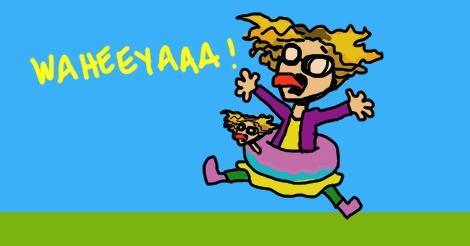 There were also twin sheep Bo and Lanolin. Bo, a laid-back West Coast dude, and Lanolin, pretty much the opposite, spent all their time arguing with each other, as any good siblings would. Booker and Sheldon were also twins! Animals, huh? They were both little chickadees, but Sheldon never left his shell. He just likes it in there, okay?