One of the great mysteries of life to me is just that amusement parks stay open, at all. Lucratively, even! They are widespread across the country, maybe even the world, for all I know. People pay something like forty bucks — maybe even more?? — just to stand in lines in hot weather while irritating people throng around them. What a nightmare that seems to be!

I suppose one of the possibilities, as hard as it is for me to believe, is that most people use these entertainment destinations as a distraction from their mental health issues. Or even more difficult for me to believe — they are not so caught up in their own heads that they seek exterior means of entertainment just for the sake of fun.

Well, I have decided to use the power of my mind to turn “mental health issues” into “a haven for exciting self-entertainments”! Allow me to make you hella jelly by taking you on a little tour of the attractions that I have all to myself since this thrill park admits no one but me or possibly some close friends or significant others whether they actually want to be included or not. I am sure that there are many personal amusement parks built inside of many human heads, but this one is MINE. 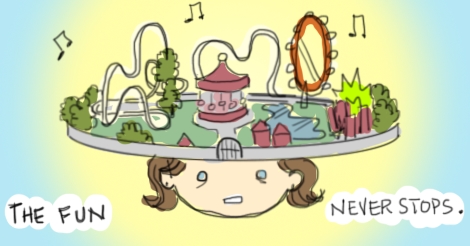 Round and round and round we go on everybody’s favorite ride featuring statues of crazed horses that you can sit on. Located in the center of everything, the delicious circus music plays in intriguing ways, sometimes speeding up and other times slowing down, sometimes several songs on top of each other. It provides the soundtrack for the entire park! Choose among such figures as “embarrassing moments,” “regret 1,” “regret 2,” and “regret 3.” Also available are “self-doubt” and “second guess” and the whimsical character known as “what if?”

Sometimes, I can sit on this carousel all day. Yes of course I get tired of the music, but the wheel just won’t stop spinning! Wheee!

Do you see how many quotation marks there are?? That is a hint of how much “””fun””” you will be having as you wander through this confusing maze of mirrors that is designed to distort your reflection. So fat! So OLD! Oh no you’re a HUMAN MONSTER, Amandoll! At the end of the maze, you are faced with a sign that says, “One of the mirrors showed the real you — Guess which one!” A free box of Kleenex is offered by the exit.

Up and down and back up again and then down again and so on. What amusement park would be complete without a standard ferris wheel? Its lights will hypnotize you and lure you in, at least once per visit. Traditional ferris wheels cause your highs and lows at an even pace, but not mine! Erratic spinning causes terror, nausea, and oh there will be screams. Sometimes, you might even go backwards suddenly! Haha what’s that about? I don’t know but I just gotta hang on and so will YOU if I let you in! Sorry!

Unlike most theme parks, where the water park part is an option either included or at extra cost, my wave pool is mandatory and filled with my own teardrops accumulated over a lifetime. It’s just going to get deeper and deeper! Will it ever drown me? It sure seems likely! 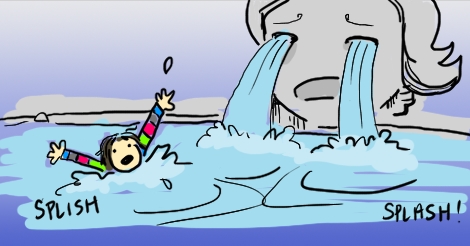 A Ball Pit — OF TERROR

A plain old ball pit wouldn’t draw in the crowds, but the allure of this one is just what will the terror be today? Thrill as you jump in only to find that in between the brightly colored rubber balls is an infestation of ticks! Or that you wind up leaping into a deep pool where there are probably sharks and eels and things. You wouldn’t know until it was TOO LATE. That’s the fun of it! And if you’re like me and try to carefully avoid it, you’ll definitely get shoved in anyway!

Saving the best for last! The Amandoll Theme Park has several of these rides, ranging from “Lil’ Upset” which features mild dips and zigzagging motion, to the gigacoaster called the Rage Machine which is only open for ten days out of any month for reasons that should be obvious. The Rage Machine has been known to cause whiplash and threat of broken bones!

An exciting unique form of coaster has been in operation for the past twenty years also: the Abyss. Normally in a traditional roller coaster, you have ups and downs, but in the Abyss, you just have down and down. It zips right below ground level and only at the very end of the ride do you return to the surface. There are no lights. All is dark. And you’re fairly sure you’ll never come out of it, but you finally do, eventually. For best effect, ride the Manic Mouse right before it, so that you can experience dizzying highs and terrifying speeds on a ride that lasts for too short, always. 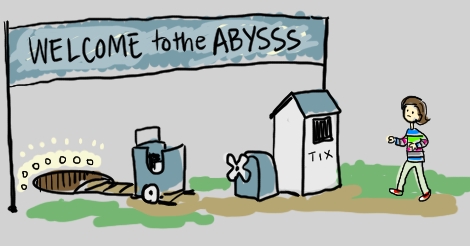 Dotted around the park are Procrastination Stations, Sentimental Interludes, Weeping Ponds, games that only win you points that you can accumulate to win prizes, with no note as to what the prizes might be, and concession stands that only serve tea, strong coffee, and flavored calorie pills so that you never run out of energy.

Small Print Warning: there is no exit to this theme park.