It is time for our very first Anime Review. Today, we look at the beginning of Girls Und Panzer, an anime from 2012, which Wikipedia describes as a depiction of tank warfare between girl’s high schools.

I am enjoying this series, but it is kind of nuts. How nuts, you ask? Their school is also a town. ON THE DECK OF AN AIRCRAFT CARRIER. LOOK AT THIS THING DWARF A COASTAL CITY: 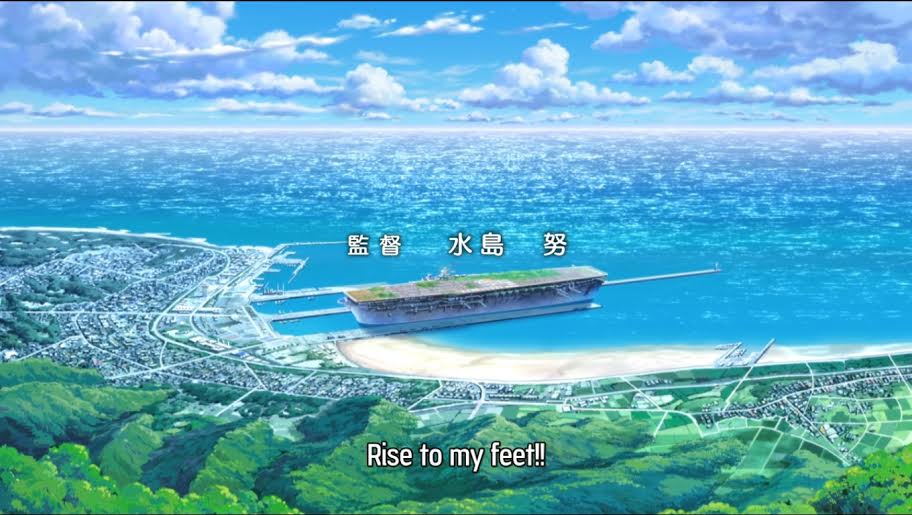 Okay, so, there’s one girl who is a “sensha-do” (tank martial arts) expert but dropped out of it because she drove a tank off a cliff into the ocean. This was shown in a flashback and is, in my opinion, a perfectly valid reason to avoid tanks henceforth. Sensha-do is sold as an elegant martial art that makes ladies “more refined,” I venture much in the same way alcohol does.

So she transfers to a school on an aircraft carrier, because it doesn’t have a sensha-do program. This makes sense in that an aircraft carrier is the last place I’d expect to find a tank. However, or meek heroine’s timing is bad as the school decides to reactivate the sensha program soon after she arrives. And moves into an apartment. On the deck of an aircraft carrier. She crosses streets with CARS DRIVING ON THEM. How big is this thing?

Anyway, I digress. The class president calls Heroine out of class and basically tells her to join the sensha club or she’ll be run out of school. Her friends stick up for her, but Heroine eventually caves because God forbid a female lead be enthusiastic about something and have normal fear to overcome.

So the girls assemble in front of the Tank Hangar and it turns out there’s only one tank and it’s broken. But there are three other tanks that have been lost since the Sensha program ended. FOUR YEARS AGO. One is in a chicken coop, one is in a FOREST, one is at the bottom of a CLIFF, and one is at the BOTTOM OF A FREAKING LAKE. I don’t know what’s going on with this freakishly huge carrier or the people tasted with making sure tanks don’t fall overboard, but someone needs an intervention. The class president makes a note of their locations so the “vehicle club” can retrieve them. THE. VEHICLE. CLUB. Okay, look class president, I understand you’re a naïve 14-year-old girl in an upsetting skirt, but that tank didn’t drive itself into the lake. Do you think the Chicken Coop Club stole it?

Cut to the tanks all lined up. 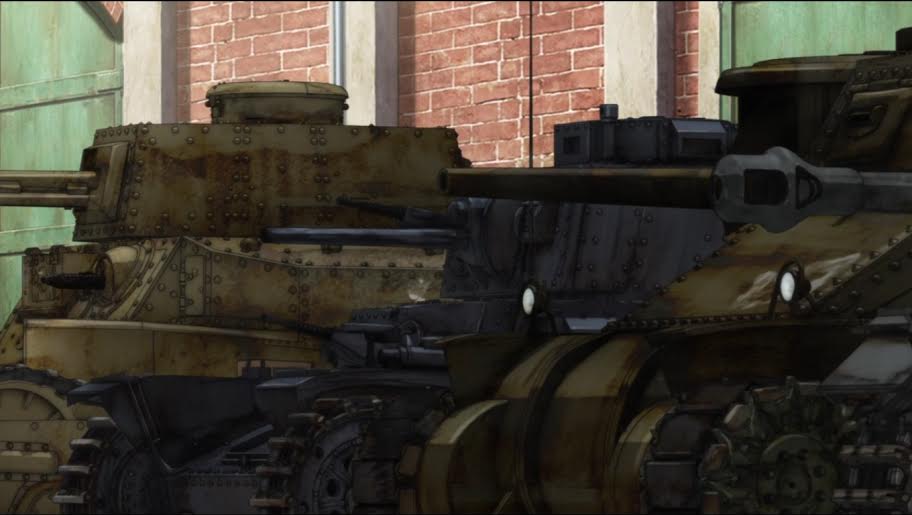 They’re all, interestingly enough, all WWII tanks, and all from Axis powers at that. There’s a montage of girls washing them that’s mercifully low on fanservice, and then they’re in working order. GAAAAH.

Then the coach arrives. In a tank. that crushes the headmaster’s Ferrari as it’s dropped from a low-flying cargo plane.That sentence would stand out in a review of almost anything else, but here it’s like a small trough in the line graph of crazy.

She says, to teenagers, “Let’s learn how to use these tanks by driving them into the woods and shooting live ammo at each other” which would make even the NRA blanch.

And, with only a few minor hitches, they all drive off in 70-year-old war machines that soldiers had to be trained to operate. And they shoot at each other. They tend to hit, which is good, because it can’t be far to their school or God only knows what else is on that carrier deck. Dunkin’ Bento? A daycare? Honestly, a mammoth aircraft carrier transformed into a seafaring city is more interesting than girls in old tanks.

Heroine and her crew decide to run away from the other tanks ganging up on them and blasting them, which is honestly the only sensible human action I have seen across two episodes. The warm fuzzy feeling of sanity doesn’t last, though, as the episode ends with them realizing they are about to run over a girl napping in the grass, though I think she is dead already from the sounds and vibrations of nearby tank fire not waking her up.