It is time for more of our Anime Review. Today, we look at more of Girls Und Panzer, an anime from 2012, which Wikipedia describes as a depiction of tank warfare between girl’s high schools. You can find part 1 of this review here.

Okay, so, our aircraft carrier school-city has five tanks, each with a crew. There’s Heroine’s tank, a Panzer IV, and her crew. Left to right, they appear to be: Perky, Sleepy, Heroine, More Perky, and Pretty. 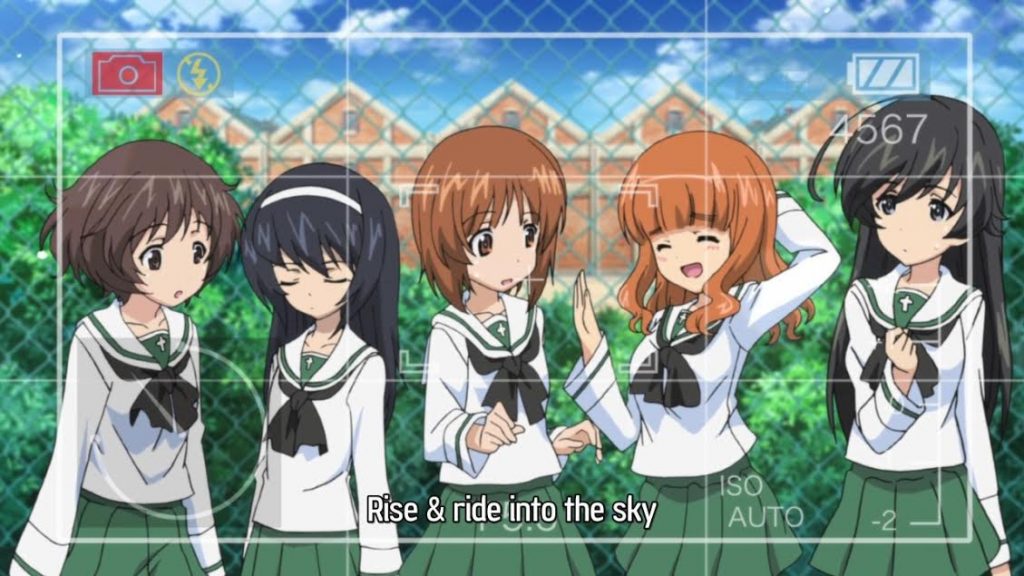 There are four other tanks, but they’re mostly around to get blasted by other schools so Heroine looks good and I can’t even be bothered to make up names for them except one is a volleyball team who seem to think if they drive a tank well enough it will get their volleyball team more funding or something. You can tell who they are because they only ever wear women’s volleyball uniforms.

The action picks up where our last review left off, with the tank about to run over a sleeping girl. Artillery is not enough to wake Sleepy up, but Heroine speaking in normal tones over a tank engine is, so Sleepy jumps to her feet and leaps onto the moving tank. Heroine convinces her to join the rest of them inside the tank when it is hit by a shell. Sleepy is sleepy because she has chronically low blood pressure, which somehow does not involve any medical care other than everyone around her yelling at her for being lazy. Yeah. 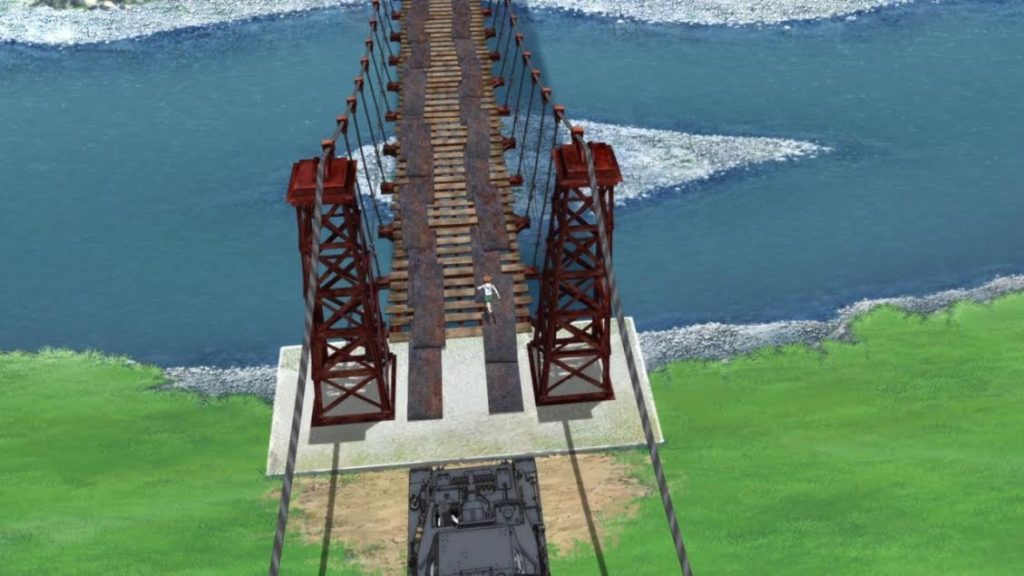 Heroine’s crew flees to a bridge, over a river, which is all located on a giant boat, if you forgot.

Heroine leaps out and starts guiding Pretty in driving the tank across the bridge, because it’s much easier to drive a tank over a rickety suspension bridge when a teenage girl is standing in front of you yelling and waving. They don’t get far when Pretty veers into a support cable and breaks it, right as the other tanks show up and start shooting.

The first hit knocks Pretty unconscious, so Sleepy takes the controls and proves herself a much better driver, as measured by the universal scale of Not Hitting Things. It is revealed she became an expert driver in the past few minutes by reading a “How To Drive A Tank” manual she found under a seat or something.

Somehow two of the tanks that were behind them got ahead of them, because I’m sure this river has more than one bridge, so all Sleepy can do is drive the tank back and forth avoiding shots. Heroine asks Perky to rotate the turret, and she starts blasting the other tanks. As each tank takes a hit, smoke rises, a little door opens on a fender, and I shit you not, a a telescoping rod comes out with a WHITE FLAG ON IT. This is how you know you are out of the match; when enough LIVE AMMO BLASTS YOU, the tank waves a little white flag. Anyway, MATCH OVER! Heroine wins.

After some congratulations from the deranged coach, and some fanservice in some bath house, we cut to the next day, where the crews have had their tanks painted. Touched-up, right? Back to historically accurate colors? OF COURSE NOT THIS IS ANIME. 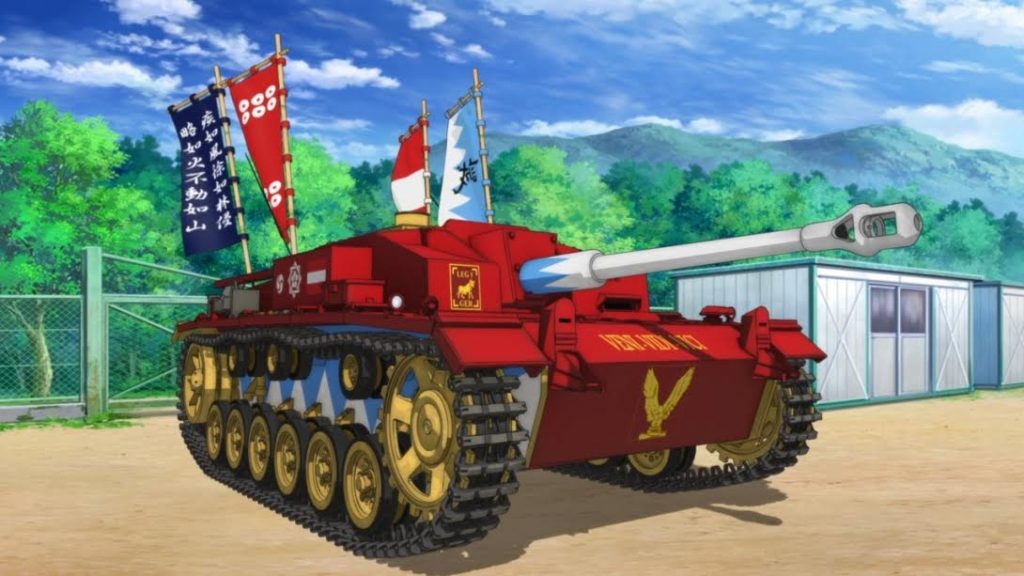 All the tanks are painted ridiculously except for Heroine’s Panzer, who apparently missed the memo. Did the Vehicle Club do this? Does their madness know no bounds?

Their coach decides they are ready for the big time, and call up another aircraft carrier, this one full of British people. We know they are British because they are sitting around drinking tea and eating dainty little dessert cakes. They accept, and the next few scenes are a montage of training and yelling at Sleepy for being sick. The other tank crews elect Heroine the team God and Tyrant (or whatever) when she shows the only ability of anyone in the room to think strategically beyond “SHOOT UNTIL IT STOPS MOVING”

Then they arrive at land and the Crazy Meter goes up again. 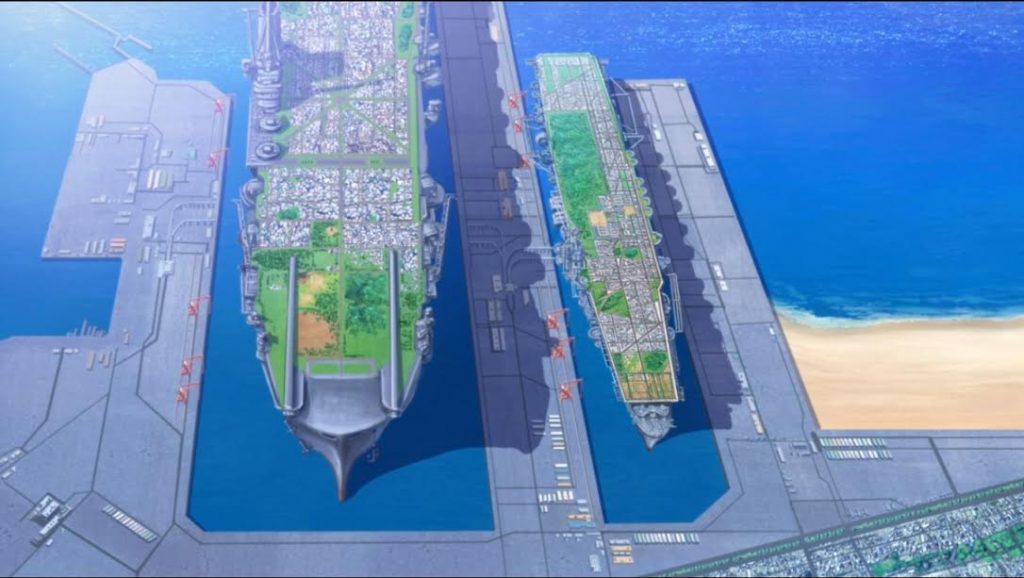 There’s not a lot of things to establish objective scale here, but the smaller ship here is the one where all of our action has been until now. WHO IS BUILDING THESE THINGS? WHY ARE THEY BEING USED FOR SCHOOLS? HAS ANYONE SEEN A RECENT MRI OF THE WRITER’S HEAD?

Stay tuned for Part 3, in which our heroes use teamwork to HAHAHAHA YOU BETTER HOPE YOU SHOW UP DURING THE THEME SONG SWEETHEART OR YOU’RE EATING ARTILLERY SHELL