Be Lazy with Me

I recently had an article about the benefits of procrastination. Aside from being probably the best article I have ever crafted, it is filled with great notions. It’s seriously long, so I imagine lots of you couldn’t make it through the whole thing, with your post-Mtv buzzfeed listicle brains, so I will give you a little summary: I humorously described how to still be productive while feeling guilty that you weren’t producing what you meant to be at that exact moment. 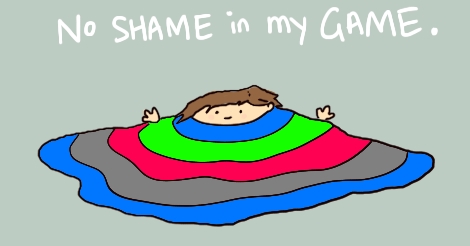 I still agree with that fully, but today there is a difference. When I had written that, I was still filled with the spirit of not-quite-efficiency. I had “up and at whatever” “can do some things” “go get ’em, someone, maybe, you tiger-shaped stuffed toy” spirit. Today, however, I am just a blob. This is not a depression. It’s just pure laziness. And I think that’s okay. I have believed the horrible things people think about laziness, too. But now, here, in the middle of a good powerful laze, I realize that I may have been being too hasty in my judgment.

Why do we need to make something of ourselves, or create legacies? If it is cold, then stay in bed. If it is warm, take another cool shower. Watch the seasons change and never breathe into a paper bag because each leaf falling is like watching another grain of sand falling through the hourglass. Each breath you take, like the tick tock tick tock of a great big life clock. Who cares!

Some of you might wish to become beholden to no one too, just like me, so I will give you some tasty samples of what you could be doing instead of working. Which is to say, what I have actually been doing instead of the million billion things I had written on my To Do Lists before I cast them into ceremonial flames.

Compulsive learning sounds hard, but it’s easy! It’s as easy as watching anything. You just open up your ears and your mind and let a pleasant narrator fill your head with facts about anything. Maybe you’ll remember trivia to enhance your conversations later, or maybe you’ll half-remember facts that you can vaguely reference later during an internet comment fight, where everyone is doing the same thing too and that’s why the world is sinking into a wretched pit of stubborn ignorance from which we may never escape. There are plenty of topics left in the world. Personally, I have watched a documentary on the Black Plague, Oppenheimer (yes, again), the Titanic, and the Hindenburg in the past three days. Pick one and get to watching.

Is anything finer than relaxing while reading a good book? I am here to posit that yes, there is, and that is reading one of the zillion pages of chatlogs that I have stored in my computer. I don’t know about the rest of you, but I have had a lot of funny conversations. Do you hear that horn tooting? That’s MY horn. And not THAT kind of tooting. Stop. Anyway, I have just been reading those and laughing because it’s good dialogue and doesn’t have any pesky old plot, although there are plenty of joke-twists. Those are more interesting than plot-twists! Anyway maybe I’ll start making new comics again, right? 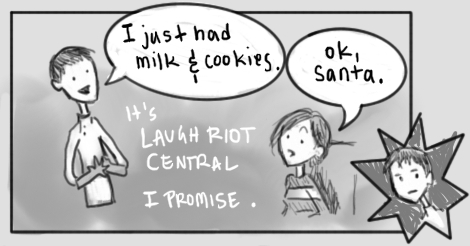 “YouTube” has become the “kleenex” of watching videos online, and I’m sure they don’t mind the free publicity. But, really, I just mean any old place to watch any old thing. I’m sure I really needed to explain that to you. Mostly I just wanted to include this video that I saw in an old chat log, but it doesn’t fall under any category of learning.

I have been taking notes for the novel I should be working on, but somewhat predictably, I abandoned the idea that I was going to write a whole novel in just a month. I want to do this well! And I am writing every day and harvesting and creating notes on it, but not in a way that I feel I should add to my word count. What a weird thing, everyone. Why do you do that “nanowrimo”? It’s incomprehensible to me, but at least it got me started on yet another thing I want to accomplish. Another project that would be suffocating me if I still believed in the idea of being productive and harrying myself to “do better” all the time, all day long.

Soundtrack for Your Life

Another chapter in living requires another playlist. For a week or two, I was so depressive (yes, again) that I couldn’t even listen to music. But today the sun is shining and music sounds so good — SO GOOD! Therefore, throughout everything else on this list, I am also listening to music and crafting a new list to listen to listlessly. No! Not listlessly. I was just on a word roll. There is not a more enjoyable use of time than tuning into sounds and lyrics and matching them up with your own thoughts and feelings. Nothing in the world feels better than that. Not anything, ever.  Anyway, for anyone curious, this here is 100% of my current life track list.