November is casually referred to as “NaNoWriMo,” but it and I aren’t close pals, so I’d like to treat it a little more formally — please forgive me. November is also known as “Movember” because some men choose to grow a mustache in order to raise awareness of some men’s health issue and they think that growing unsightly facial hair is better than just educating people with frank discussion, but the novel writing is a better use for a month. Gentlemen, may I suggest that you wake up daily and begin with a shave, and then write your novel about the men’s health issue? I don’t think I even know what the health issue is because I avoid going places where I might see a mustache.

This has been going on for years and years, for as long as I can remember on the internet. However, I have never been interested in giving it a try. “What could I possibly write about that could be engaging?” I always wondered. I write nine hundred million words for Sneer Campaign every year in the form of these well-composed articles, but those aren’t NOVELS. Novels are more serious. Novels are respectable. I mean, aside from all of those self-published novels that flood Amazon’s e-shelves. Those weird novels that seem to have been written in a week and never proofread. But I would want to do better than that! Wouldn’t I? 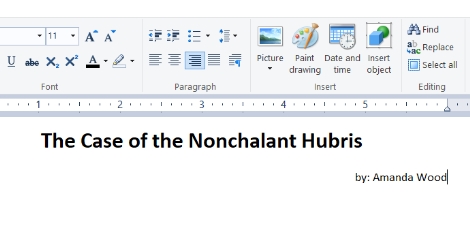 It is entirely possible that I might participate in this novel-writing craze that grips some people every November. This might be the year! I have always meant to write books. We always talk about starting a publishing house. We say that we are going to write romance novels, but I don’t want that to be my first novel. Mine needs to be so good that I will be too intimidated by my own success to ever try again, because how could I ever top it? That’s the kind of person I am.

I am also the kind of person who talks the talk but might be too lazy to walk the walk. I have procrastination and excuses. I have a love of relaxation. I get a little uppity when I have a schedule to adhere to, such as a daily drawing or so many words per day — even when I volunteer the time and set my own schedule! At some point I say, “who am I to tell me what to do! I’m not the boss of me!” Then I have candy for breakfast and live happily ever after.

But I am talking about writing a novel, not actively writing a journal entry to show to a therapist later. Can they be both? Hello, therapist, help me. I have written a fifty thousand word book explaining what might have gone wrong.

No. I think I will participate this year. And maybe it is just because we didn’t have an article ready for today, but what is a better origin story for this year’s Great American Novel than that? I can only hope that this goes better than Inktober 2017 where I drew exactly one tiny picture on the first day and then made barf sounds each and every day for the rest of October. Draw? Every day?? ME? Yeah, like, every other month of the year maybe.

Let’s get to writing. 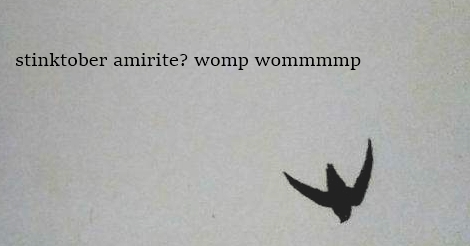