It’s a well-known fact that it’s very difficult to train a cat. Some people say it’s because cats are too smart to be trained. Now I may not know why it’s so hard, but that definitely isn’t the reason. Cats aren’t smart animals. They might be sneaky enough to trick you into thinking they’re of a superior intelligence, but just because they can pee in my toilet and open my cabinets, I won’t be fooled. They’re stupid, they have nothing to do all day, and they can jump on top of anything. It is a perfect storm of potential for a cat-tastrophe.

Anyway, I’d often wondered if my thick-headed felines knew what their names are. Sure, sometimes they turn when I yell their name, but maybe they’re just turning at the yelling. Or maybe they know by the tone of my voice that they’re doing something wrong. Or maybe they just already knew they were doing something wrong, and reacted in a panic to the loudest noise. I’ll never actually figure it out, but I try sometimes. 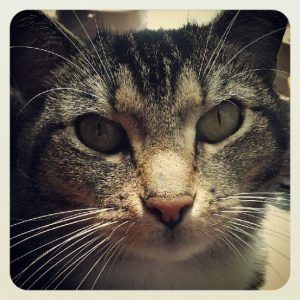 “Haircut!” I’ll yell. Chances are, she won’t react at all to the first announcement of her name. Not only will she not stand and walk to me, but she will not get up, will not move her head, and doesn’t even flinch her ears at the sound of her name, given to her at a few weeks age and used forever since then. She is now at least seven years old.

Being completely nonplussed is one of two common reactions from Haircut. The other is to start purring at the sound of her name. Again, I don’t know if it’s because it’s her name, because she hears a noise, or what. But she will continue what she is doing, whether it be walking, eating… whatever lazy thing she happens to be doing, while purring. 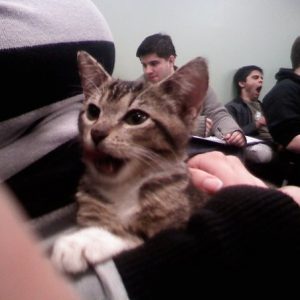 “Haircut!” I will try again. It’s worth trying again, because cats don’t always listen. Whether or not they are intelligent enough to know what we’re saying, most of the time cats will at least pop their ears up or look at you to acknowledge the futility of your command. Maybe I will get her to at least acknowledge the noise I’m making, to see if she will then recognize the name.

“Haircut!” She is now a foot away from me, paws curled under her chin, staring at the part of the cabinet where food might rest behind. Trying to get her attention by name is, unsurprisingly, still not working. But I keep trying, and everyone watches, eagerly even. They are practically on the edge of their seats, also expecting a reply from the eponymous cat.

“Haircut!” turns into “Haircut! Haircut! Haircut!” Her tail twitches and her left paw uncurls, but alas, she is just stretching. Almost taunting us with how nonchalant she is about us sitting around trying to get her attention for 5 minutes.

“Haircut! Haircut!” I start to yell louder. It attracts the attention of the housemates, neighbors, and visitors around. They all look and start to eagerly lean forward at each instance of her name. “Haircut!” They all get smaller in unison, as they crouch toward Haircut and the floor. “Haircut!” and each friend tenses, waiting. 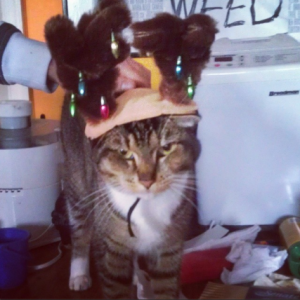