Growing up in the South (as a PROUD SOUTHERNER) I was offered a variety of food and drink items on a regular basis. Most of these were good. We’re talking about your fried chicken, watermelon, grape soda, SOME BBQ, Cheerwine, and other assorted Southern delicacies. This was quite pleasing, as they were always being offered and seemingly readily abundant. There are however a few Southern staples that don’t please me. There are a few food and drink items that downright disgust me. The big problem is that those were just as readily available and were being offered to me just as often. But one item stood out above all others… and it was a beverage. In fact, I don’t think it even deserves to be called a beverage. It’s swill. The foulest swill. It haunted me throughout my childhood. One sip and I turned into Jim Carrey, my face contorting wildly, jaw jutting out further than my bone structure allowed. Much like Jim Carrey, this was no laughing matter.

I was plagued my entire goddamn childhood by SWEET TEA! 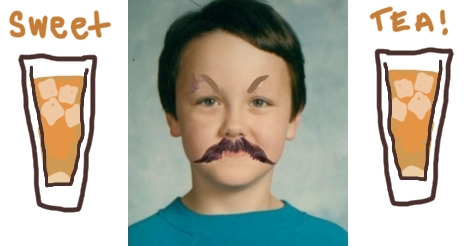 It was always on tap at home, but my parents learned very early on that I did not like it and they never offered it to me. For this I thank them. I just wish the rest of my damned relatives would have gotten the picture and afforded me the same luxury. It never failed that with every visit to ANY family member, the offer was made. Visit my Uncle Sonny, sweet tea was offered. My Uncle Jay, sweet tea was offered. My grandfather, aunt, uncles, cousins, and even my damned friends’ parents would all make the offer every single time. My reply:

Isn’t that the kind of statement that only needs to be said once? It was meant to be a very final-type thing. I do not like sweet tea and I never will. But apparently there were several interpretations of it in the heads of my “loved” ones. I imagine when they heard that some of the things that went through their heads included:

I can really only assume that is what they heard me say. I have no other explanation for their constant offering of that foul piss-water other than maybe they all secretly hated me and enjoyed the visible pain and displeasure that washed over me when they extended the offer. Even as a child I knew that something wasn’t right here. I knew that my simple statement of not liking something should be enough to let that person know that I did not want sweet tea on THAT day or ANY OTHER day. My goddamned piss was coming to a rolling boil. All I needed was one more offer of sweet tea and I was going to have to do something. I was just waiting for the last straw.

I loved my Aunt Ruth. She was one of those relatives that you always remember being extraordinarily old, even though as a young child she probably was in her late 50’s or early 60’s. Going to visit her was always a blessing and a curse. She was one of those Southern women that wouldn’t dare have company show up and not have any food to offer them. She remedied this not by fixing a sandwich or two or cooking up a dish, but instead she would always have a whole damned spread. Every visit to her house was like Thanksgiving, except without dry-ass turkey (which I’ll speak of another day). Every single thing she fixed was incredible. Every food item that is. Biscuits, chicken, macaroni and cheese, mashed potatoes…

It was always there, without fail. It sat right in the middle of the table, so that I could never really remove it from my line of sight while I was getting my food. I’m not sure if my Aunt Ruth was a master strategist or not, but the placement of that damned jug was so perfect that I couldn’t escape it. On this particular day I remember being so thoroughly disgusted that I just turned my head to try to look away from it.

She had a mirror on the fridge, and you sure as shit know what I saw in it.

I see you brought your A-game, Ruth. I could feel the general rumbling in my brain that the sight of sweet tea stirred up starting to ramp up a bit. Truly, was there any escape? I wondered that as I spooned copious amounts of macaroni onto my plate. I had only experienced several precious years of life, but I wondered if this was something that was going to follow me forever. Would I be 90 years old and forced to drown my great-grandson when he came to visit me in the home and brought me a Moon Pie and glass of sweet tea?

We sat down to eat, and it wasn’t long before it was pointed out that I didn’t have a drink.

This was apparently impossible to understand, as I was presented with my drink options:

Oh, I was well aware they had tea. I had to stare at that damn thing for the last ten minutes. Now at this point I’ll mention that there was a kind of tea I liked. That tea you get in the can out of vending machines. That Lipton Iced Tea, Nestea, and all that sorta stuff that I was always told is “not real tea.” So I thought I would try a different approach.

Simple enough. I knew she didn’t have any of that. Or did she? I was then told that what was in the jug was in fact the kind of tea I was talking about. I was in shock. Did she finally understand? As a matter of fact, I did notice that the smell of this tea wasn’t as putrid as it normally seemed. Was this a victory? Sure this was only one family member, but surely the others would follow.

I gladly accepted a glass and took a big ol’ swig.

I saw red. I’m pretty sure I looked like a stroke victim. I quietly got up from the table with my glass, walked over to the sink, and turned that glass up. As the contents emptied into the sink, I matter-of-factly proclaimed:

“That is not the kind of tea I like. That is the same old NASTY sweet tea.”

There was silence. My grandmother and aunt could only look on in shock. The sound of the tea hitting the metal sink seemed almost too loud to stand. After the glass emptied, I slammed it into the sink pretty damn hard. It didn’t break, but I do recall during a future visit there was a glass with a small crack in it. I can only hope that was my work. 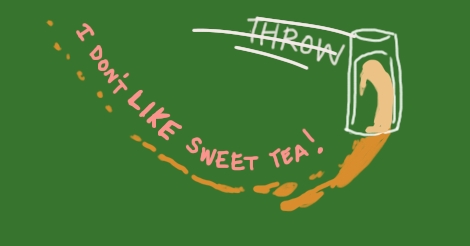 I stated it one more time, for all to hear and hopefully understand. Did it work? Did I rid myself of the burden of being offered sweet tea every time I visited? Shit no, it didn’t work.

Sweet Tea and The North:
One Tastes Like An Asshole and the Other is Full of Them

This part is going to be short, but it needs to be touched on. Just because someone is from the South, it doesn’t mean they love goddamn sweet tea. You wouldn’t believe how many times I encountered this when I briefly lived up there. People telling me they sure wish they could have some, or who has the best, or just a ton of other fucking ridiculous questions and assumptions in general.

When I lived Up North, not a day went by that I didn’t get hounded about my apparent love for sweet tea just based on the fact that I’m Southern. Though I guess maybe that wasn’t as bad as how amazed everyone always was about my accent. Say what you will, but at least when I say “crayon” I recognize it has two syllables.

Now that I am older, I do miss a lot of things from my childhood. I miss my Aunt Ruth’s home cooking (God rest her soul), and I do miss visiting with all of my family. I guess this is the point in time where I look back and can actually laugh at all of those times I was offered sweet tea… and maybe even miss it a little bit.

Well that ain’t fucking happening. I don’t look back fondly on that shit one bit. I was pissed at my relatives back then, and I still am to this day. I still hate that filthy fucking swill and I’ve pretty much got a murder planned if it is ever offered to me again. If you love sweet tea, by all means drink it up. I don’t have any problem with that. I personally am fine with you liking a drink that tastes like the sweat from a wrung-out gym sock. That’s cool.

Just keep it to yourself.