Hedda Hopper was a true Sneer Queen. She was known primarily for her caustic wit and her outrageous hats, which would fit her nicely into our crew. Her gossip column was well-known, and vicious, but she also starred in well over 100 movies! She knew famous people and used it against them. She had feuds with other columnists and was even kicked in the butt by Spencer Tracy over some gossip!

She was so great that she even accepted a joke valentine of a skunk gracefully. Probably the only gossip columnist with a Hollywood Walk of Fame star, Hedda surely made a name for herself in the Golden Age of Hollywood. 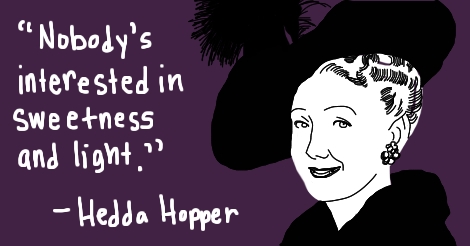 Born Elda Furry- wait, why would you change that? That’s an amazing name. Oh, yeah, she was encouraged to change it by a numerologist, whom she paid $10. Sure, she changed it because her shady husband kept calling her his previous wives’ names, but it’s still great. We’ll let the awful husband slide, since it was 1913.

Truly, it’s hard not to be jealous of someone who was good friends with Lucille Ball. Those two out on the town probably had a lot of crazy adventures. Adventures involving hats and skirts and jokes and jealous men.

Hedda is one of our Sneer Heroes. A Sneero. She was smart and knew what to do with that fact. She had famous friends, and used that for herself too. And she never missed a chance to steal the show with her accessories and slights.

She had her own radio show and column about Hollywood gossip, which was the initial idea for Sneer Campaign! In honor of Hedda’s birthday today, we’d like to officially start a feud with Retrovania, the male version of Sneer Campaign. The site is pretty good, for amateurs. 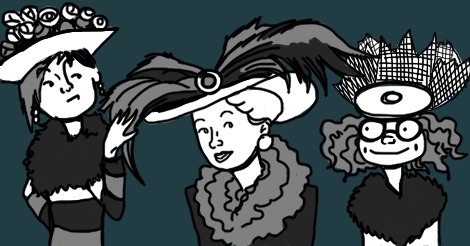