All of this could have been avoided. This entire article wouldn’t have even been necessary if my parents had followed a fairly logical rule. As a parent myself, I know this rule inside and out. If you have kids, you know it too. But for those of you without children, I am about to drop a real gem on you. A piece of advice that will make your parenting days a lot easier and lessen the chances of your home experiencing a murder/suicide. You ready? Okay.

Don’t tell a child that they can’t see/do something because it is “for adults.”

There you go. I just saved you a lot of yelling and a handful of awkward visits from Child Services. Now don’t go thinking I’m one of those people who doesn’t believe in telling a kid they can’t have something or do something. I’m not saying that you should let a child get away with whatever. By all means, tell them “no” when you want them to keep their snot and dirt-encrusted hands off of something. When they ask you why, just don’t make the mistake of telling them it is for “big folks,” “adults,” “mommy and daddy,” or whatever other stupid shit you say instead of just looking them in the eye and saying, “Shut the fuck up.”

A good solid “shut the fuck up” from my folks sure would have saved me a whole lot of grief. 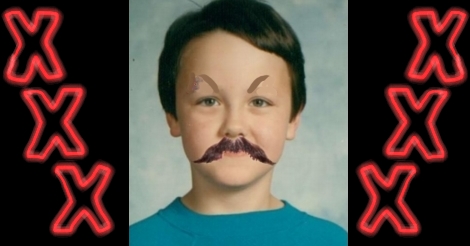 One of the biggest things I miss about my childhood is going to the video store. Every weekend my family would go, and it never failed to be the highlight of the week. This was my “candy store,” and it would lead to everything from crude childhood drawings of my fantasy video store to serious thoughts into taking up working behind that counter as a lifelong profession.

I’m employed, so of course that means I didn’t follow that dream.

I do have to admit that I was pretty lucky for the simple fact that my parents let me watch whatever I wanted. Ratings didn’t matter in my house. If I found a movie I wanted to watch I simply handed it to my folks and they checked it out. Didn’t matter how much blood was being splattered or how many large (and when I look back, odd-shaped) 80s titties were bouncing around. This gave me a sense of freedom that few of my peers experienced. While they were confined to the “Family” section, I had a complete run of the place. Many times a schoolmate would pass by as I was in the “Horror” section, and they would stare on in awe and amazement. Of course I’d play it up and snatch a film off the shelf and showcase the cover while letting out a big “OH YEAH” nod or some other cheesy thing we did back then. Hell, maybe I even gave them a thumbs up… although I’m fairly certain the act of giving a thumbs up might make it on to one of these articles one day.

I had just picked up a video, a hard-R slaughterfest, when I noticed another section of the store that had just been added. It was a whole other room that was merely covered by nothing more than a sheet tacked up over the frame. As folks went in and out, I could just make out the fact that there were a ton of other movies in there… mostly in rather abnormally large boxes. The whole thing reeked of being off-limits, but I was the king of the castle in that son of a bitch and I didn’t CARE ONE BIT. I proceeded to head toward the sheeted doorway only for my father’s (then seemingly) 1,000 pound hand to slam down on my shoulder and re-direct me. I was instantly awash with confusion. I had roamed this land free and with no restrictions for so long, but now all of a sudden my very freedom was being taken away from me. In my eyes, Bill Holiday had just transformed into a reverse-Abe Lincoln.

Why was I being pushed away? Because that room was “for adults only.”

That evening at the video store didn’t go over too well with me, and it would soon become a focal point of mine for weeks on end. What was this new room that was for grown folks only? I was allowed to watch everything from cut off heads to flappin’ tits. What could possibly be so bad that I couldn’t watch it?

I knew what had to be done. I quieted down on the subject. I didn’t say a word about it the next time we went to the video store. I knew that I needed to lay low for a while until this whole incident was forgotten. Yet another trip went by the next week and still I just walked over to the usual Horror section, picked out a film, and left. I was able to play it cool so well because I had a Master Plan in the making.

With two whole weeks gone since I last mentioned my curiosity over that room, I decided it was time to make my move. When we got in the car to go to the video store I informed my mother that I knew what I was looking for this weekend so I could just run in. Mind you this was probably a sweet relief since trips to the video store with me were usually 45 minute affairs in which I looked at the back of every single box as if it were my LAST trip. So it really came as no surprise when she agreed. I made sure to keep my damn mouth shut once she did also. You see, I was a smart kid and didn’t do that dumbass thing kids always do.  You know, this:

Kid With Cunning Plan:  So can I [cunning plan]?

Kid With Cunning Plan that is Just About to Work:  Oh. What? Really? You don’t mind? You mean I can [cunning plan]?

Kid with Cunning Plan that was Just About to Work but Didn’t Because They are a Moron:  …

I simply said nothing. We pulled up to the store and I smoothly strolled in with all the pride and swagger of a criminal who just pulled off their finest illegal activity. This was my diamond heist, this was my stealing from employee pensions, this was my kidnapping an A-list celebrity and over the course of a year turning them into a willing sex slave. This would be my greatest trick, my greatest deceit. About five minutes later it would also be my most regretted.

I stepped in and immediately shuffled off to the far side of the store. This was the “Foreign” section so instead of having to navigate through a bunch of people I just had to machete down some cobwebs. I purposefully struck early on Saturday instead of Friday night, as the store had very few customers. The curtain was in sight, and I was completely out of sight. I took hold of it and then took the fateful steps that would temporarily confuse me greatly as a child, but probably cement my being a perv for good. 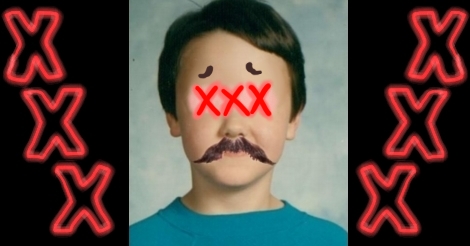 The shelves were littered with pornographic images. Not soft-core stuff, but the BIG TIME. I recall looking around at all of the throbbing erections penetrating pretty much every orifice. The women with looks on their faces that was a cross between happiness and being violently murdered. The men with their snarled expressions that made me think of Cavemen which somehow immediately brought to mind thoughts of Captain Caveman. Did he do this too!?!? My mind was reeling. I could never properly get across what was racing through my brain, but it went something like this:

So I saw what I intended to see, only it wasn’t what I intended to see. I would go home slightly confused for quite a while, but thanks to turning a little older (and a not-so-scrambled satellite channel), I would come to have a full understanding and grasp for what I saw that traumatizing day.

It should also be known that I was mostly fascinated by “white urine” being called a “load.” I take the lone credit for most of the boys in my 3rd grade class stating out loud that they were heading to the bathroom to “let out a load.” Those were days worth missing.

A Crime Without Punishment

Not only was my plan perfectly executed on that one occasion, but I would go on to do such several times over after the initial shock wore off. Was I ever caught, you may ask? Was I punished for disobeying my parents, thus proving there is true justice in the world? HELL NO I didn’t get caught. Never once was I caught at the store, nor did my folks ever catch on to what I was doing. In fact, as the years went by I can safely say I was never caught looking or in possession of any pornographic materials at all.

You just gotta want it, I guess.