In the year 1776, as chaos and tyranny swirled around the vulnerable human race, there formed a perfect union of superheroes intent on establishing Justice, insuring domestic Tranquility, providing common Defense, promoting the general Welfare, and securing the Blessings of Lady Liberty herself for all time. It became necessary for this mighty team to band together for the greater good of all, using their superior station which the Laws of Nature and of Nature’s God entitled them. 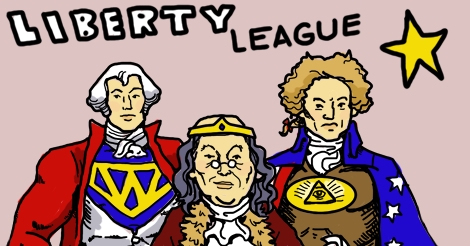 In present times, they believe firmly that all humans are created equal, and that we humans are endowed by our Mere Existence with certain unalienable rights. Among these are “Life, Liberty, and the pursuit of Happiness.” Whenever our heroes encounter anything destructive of these ends, it is Beholden of the League to alter or abolish it. No longer should any Freedom-Loving Citizen be subject to long eras of abuse or Despotism. It is our right, it is our duty, to throw off the shackles of oppression and beseech our Guards to intervene.

Let our League now be submitted to a candid world.

George Washington – Born on the distant doomed planet of Truthtopia, young George was discovered crash-landed under a cherry tree in the blessed land of Virginia. His wooden teeth granted him powers which made him superior to earthlings in every way. He accumulated honors and kudos and eventually saved the planet by defeating arch-villain General Cornwallis in a battle that destroyed most of the Eastern Seaboard. He nearly became Emperor of America but as he has only goodness in his colossal heart, he stepped down in order to serve in the League.

Thomas Jefferson – Surly anti-hero Thomas Jefferson enjoyed all of the benefits of a privileged upbringing in the state of Virginia. Possessing a brilliant yet wrathful mind, he is often tormented by his passions, hypocrisies, and antisocial tendencies. Aware of his own flaws and powerless to conquer them, he instead focuses on creative solutions to other people’s problems. His popularity is somewhat perplexing and has been the subject of many essays.

Benjamin Franklin – Using his Kite of Wisdom (adorned with the Key of Understanding) to attract flashes of Insight from the Universe, WonderBen uses his super-mind to concoct helpful adages to encourage and motivate the average person to become better versions of themselves. He is invaluable to the Team as his gentle guidance keeps everyone on the right track.

James Monroe –  An unimposing extraterrestrial humanoid, James Monroe was pulled to Earth by an experimental teleportation beam, and we are so lucky that he was. He is a humble space man with all of the strengths of the members of the rest of the Team, but so modest that he is often overlooked. He speaks softly, but can confidently direct action and defend his adopted country without hesitation or flaw.

John Adams – The most corpulent of superheroes, John Adams sprang fully formed into the world from the great Brain Tree of Massachusetts. As such, his powers of rational thought, unbiased logic, and complex problem solving are second to none. A fair, strong-minded man, he can telepathically persuade people into doing the right thing, if they need coaxing.

Alexander Hamilton – Starting life as a poor island boy, Alexander Hamilton used his superpowers of willpower and moxie to rise in the ranks of military and society in general. His ability to understand abstract concepts of currency and economics earned him the moniker of the Mint Dollar and he flies around the country helping those in fiscal straits. He always wears his ring which harnesses the power of the Federal Bank, the most powerful tool in the universe.

James Madison – Our tiniest Forefather and Spriest of all the US Presidents in History, James Madison had a slow and late start to life. When the call of the Revolution hit him like a bolt of lightning, he was transformed into a superfast mental giant who can speedily, incisively solve any problems of policy or moral deficiency. His tiny bird bones grant him actual physical speed, as well. He is often aided by his beautiful sidekick and wife, Dolly Madison, who has super charm and social grace.

Click on this image, print it, color it, frame it, and hang it on your wall. 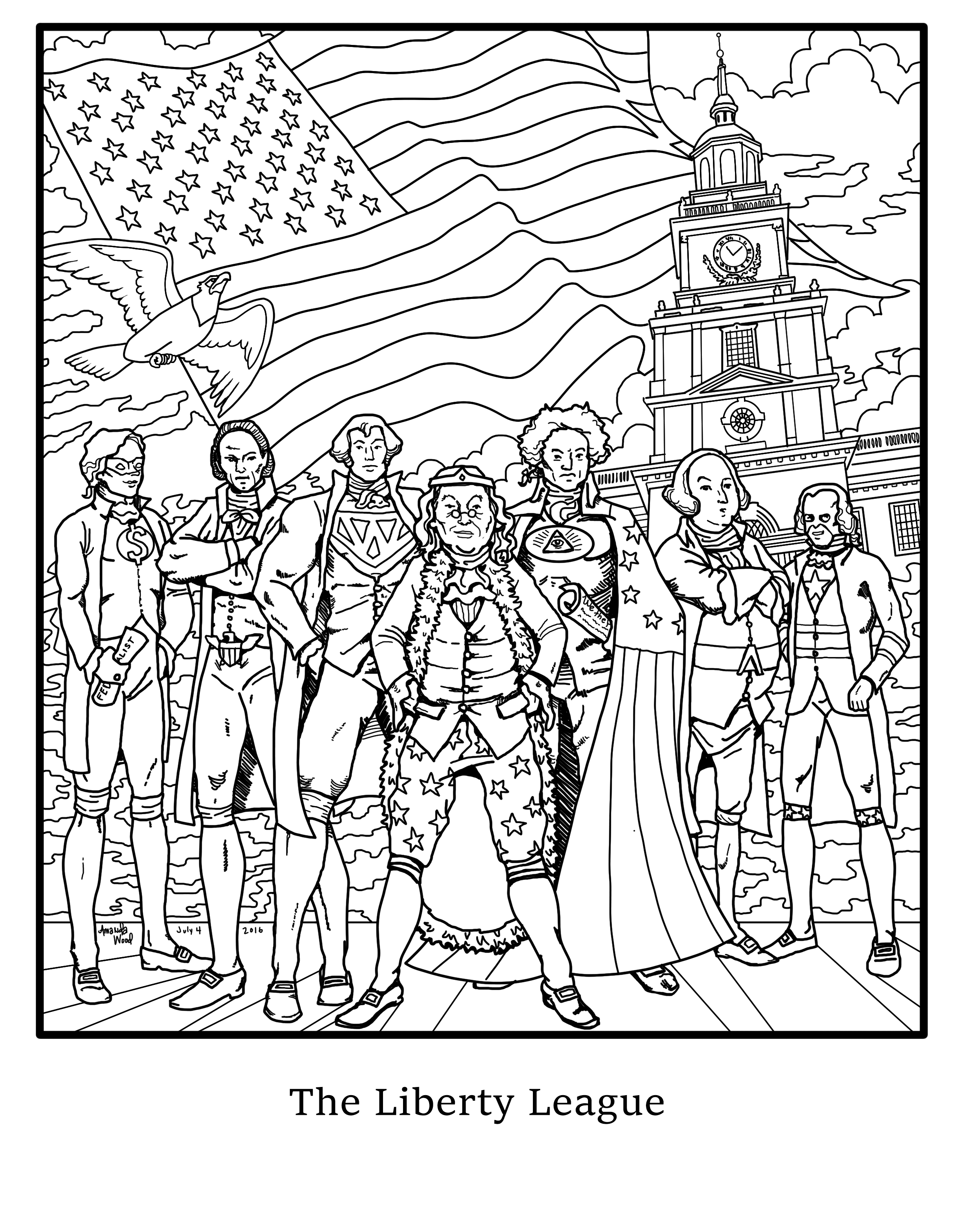 The Heroes pose in front of the Hall of Independence, certain that even if they privately bicker among themselves over fine details of Constitutional Interpretations, in difficult times, they can, will, must work together and keep the great experiment alive. As one of the later members of the Liberty League once famously said: “A house divided against itself cannot stand.”