Dressing Up Your Dog for Halloween: Disturbing Cruelty or Happy Delight?

It is a statement of fact when I announce to the world here that dogs 100% love Halloween because they are animals that enjoy being dressed up in ridiculous costumes. Our four-legged friends excitedly wag their tails when they see their human companions lunge toward them with doggy-sized clothes. They yip in ecstatic delight and dance their paws in place when they see fabrics sewn to fit their quadruped shapes that then showcase these proud little companions to be some sort of dog-related pun, or the star of some television show that the dog does not appreciate OR even watch at all! Dogs love being made into laughingstocks, there only as spectacles for human snickering – the tune of which either sounds misguided, derisive, or full of pity (dogs can tell the difference). I mean, even going to a costume site will display for you, one after the other, the expressions of pure canine joy as they pose for the camera in yet another adorable, cutie-wootie, charming little outfit. 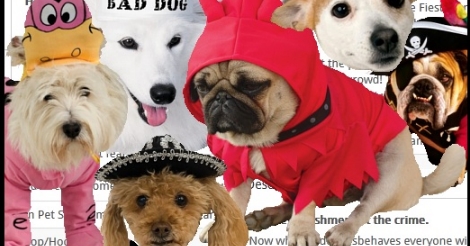 Oh wait, what am I talking about? Dogs obviously hate being dressed in anything like clothing and endure it only because they think they are being punished and will do anything to get back into your good graces. These friends of humankind are long-suffering little heroes, designed to help people and be true pals. People, of course, are mostly undeserving of such unconditional love, and throughout history have beaten the dogs, and submitted them to every form of cruelty, interspersed with occasional treats, food, and shelter. OCCASIONALLY. You could say that dogs have had it a lot better lately (ignoring all of the cruelty they are still subjected to at the hands of modern-day monsters, as seen daily via viral videos designed to make us weep), but then… then we notice an increase of popularity of Costumes for Dogs.

I considered making an article devoted to harshly reviewing canine costumes in much the same manner as we would review costumes for adult humans. Costumes that inspire revulsion, horror, anger, or despair. But as I perused the pet costume sections, I found that every single image filled me with anger, and pity. Okay, there were one or two that were pretty cute I guess, but never cute enough to justify sticking your dog in it. Dogs wouldn’t see it as cute. They just see all these as “was I bad? :'( ”

These dogs are not people. It seems so sad that I feel I need to remind anyone of this. But, dogs do not dress in clothes. They don’t need to: they are covered in fur. They are proud nudists and see no reason to be covered up. I am pretty sure that WE only started wearing clothes because we are hairless and get cold and sunburn easily. Most dogs don’t have this problem. Maybe the hairless dogs appreciate little blankets and coverings, but your average Retriever or Dalmatian doesn’t. Let them be dogs! Allow them to keep as much dignity as a forced-companion and slave-servant can have. While they are fetching your paper and slippers, do not also expect them to wear little costumes, degrading them further than any creature should have to endure. You may think that dog-clothes elevate them to closer-to-human status, but look at their faces. You can see that the effect is quite the opposite. If you want to elevate your dogs, just treat them with respect. They would appreciate it so much more. 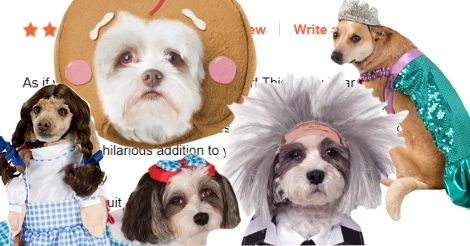 And they aren’t children, either. I have noticed a disturbing trend of people who not only treat their pets as fellow humans (which isn’t always such a bad thing, it is just that often people place the wrong kinds of expectations on pets when they are regarded as human), but they treat them as eternal three-year-olds. And judging by the way these dogs usually behave, if these people had real three-year-olds, they would be the super awful bratty kind all spoiled and mollycoddled and horrible to be around.

There’s probably something deeply psychologically crippling about being a grown up animal trapped in a human family, forever treated as a surrogate child to the adults you live with, dressed in human clothes, spoken to in baby talk — do you think they feel as frustrated as any of us would be if we were never allowed to leave our parents’ houses? Do dogs know to be frustrated by this? Am I giving them too much credit? Well, if they’ve never known respect or dignity, they probably don’t realize that they are missing it. They’ll just continue biting guests for sitting in “their” recliner, being food possessive, and territory-marking all over the house until their owners finally have a real child, then the dog will have to get used to living chained to a dog house in the backyard, or TO THE POUND it will go! 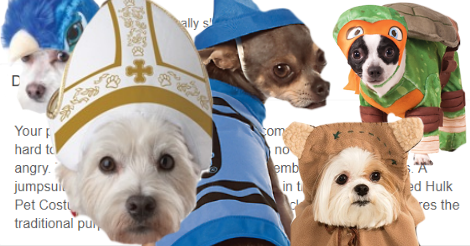 More importantly, dogs are not toys. It is INCREDIBLY sad that I feel that I need to announce this to anyone on earth, but it seems to me that people are using dogs as accessories and playthings. What sort of upbringing did a person have to have that they see living animals as nothing more than mobile babydolls that exist to dress up, snuggle, and dispose of when it turns out that it snaps at you when you pick it up, or when you get tired of cleaning its waste, or when you don’t have money to treat its illnesses because you spent it all on costumes and little purses that are made to confine an animal. They have thoughts and feelings, as much as they can in the face of being treated like a worthless object. These dogs would very much like to flourish in a caring environment, just like anything would. You can see these effects on people who are objectified and treated as though they are inconsequential. They often turn out to be miserable and will act out eventually, or die from pining away over thoughts of “is this all Life is?” So, too, do pet animals act out or pine away. These pets wind up being euthanized! Maybe that is actually preferable to the life they were having. 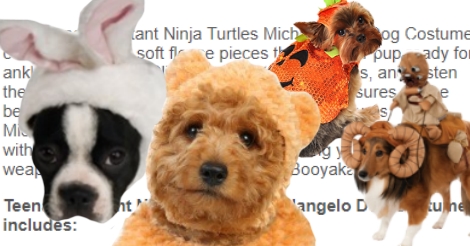 But I don’t know. Maybe you are one of the rare people who CAN do this while still granting your pet friend some dignity? Maybe you have the sort of dynamic with your dog where you can detect if he or she is uncomfortable, and then respect that and not force them into a shameful get up. Or, perhaps you have a goofy, wacky dog who likes clowning around. I think those DO exist. And I mean, maybe I am wildly biased because my parents raised me to treat animals as respectable beings that have different perspectives than our own.

Also, all of the dogs I grew up with would have rather died or bitten someone’s face off if they were threatened with being clothed. There is an old family story about the Great Dane we had when I was just a child. There was a blizzard going on outside and he was not a long-coated dog, of course, so Dad tried to put one of his sweatshirts on him and they wound up wrestling all over the living room because Eli refused to suffer the indignity. He just shivered terribly when he had to go outside to relieve himself. Therefore, I think ALL dogs share that same opinion as Eli on the matter. That’s what this is all about. Of course, your dogs will forgive you − BUT WILL I?!

What of cats, I hear you asking. Haven’t cats been dealt a similar hand? Well, actually, apparently not. You can sometimes find extravagant collars or maybe a Kitty Hat that will in all likelihood get torn off by the offended feline within moments of finally getting it in place. Cats are uppity creatures that sort of over-estimate their own worth. They are vain and won’t put up with much. Some people think this makes cats the superior creature, whereas others think it makes cats into insufferable jerks – proof that dogs are superior pets. In fact, it just is a plain old Difference between cats and dogs, leaving them to be pretty much equal. I personally have to respect the cat for somehow resisting most instances of being costumed. If you force them into it, they will hate you and pack their bags and leave. It’s admirable. It’s dignified. It’s… Oh heck, I’ll just post the picture now. 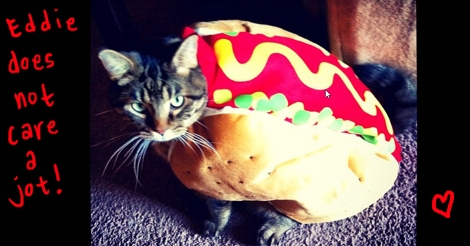 So maybe you can degrade a cat with promises of treats before, during, and after. I am sure that we can learn a lot from this lesson for use in our own lives, our own day-to-day interactions. Wisdom teaches that we can learn a lot from observing our animal friends in the natural (and unnatural) world, and we see here today that this is True. And this concludes my article that was conceived entirely on the premise of collages of Sad Costumed Dog Faces and one big fat hotdog cat. And unlike every single dog pictured here, I have NO REGRETS!