Horror? I Don’t Even Know ‘Er!

My favorite part of Halloween is the discounted candy November 1. You can get a three pound bag of Milky Way bars for a dollar because they have bats on the label. It’s a wonderful time. But for most of you yahoos, it’s about scary things, like haunted houses and horror movies. There’s nothing some people like more than to put on a scary movie, curl up on the sofa, and drench themselves in terror for an evening.

I am not one of these people. Real life and actual people scare me far too much as it is. Remember the fad last year where people would dress as clowns and try to lure people into desolate wooded areas? As I write this, I have a stoma, which means my digestive system ends abruptly and prematurely at a hole cut in my abdomen. I don’t need your David Cronenberg. I use my entertainment to escape, so I watch sci-fi and comedies, funny-bad movies and just plain crazy stuff. Maybe even the occasional romantic comedy, because if there’s one thing life sorely lacks, it’s happy endings. What I’m saying is, I’ve never been much for horror movies. This upsets people I converse with to no end, as they say things like “You’ve never seen ‘Saw?’ Man, you gotta see it! It’s the best!” I usually counter by insisting they experience the overlooked genius of “Battlefield Earth,” because I want them to hurt. I’m petty.

So here now are my reviews of four classic horror films that I have never watched, nor plan to. I glean my information from Wikipedia articles, animated gifs, and recollections of any friends with a few minutes to spare. 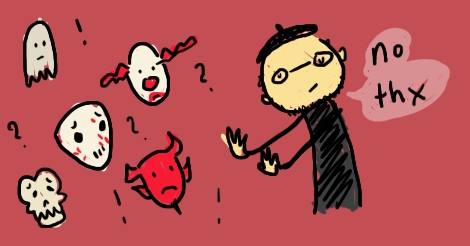 The Exorcist is considered to be one of the few truly scary movies, one that relies on building an atmosphere of tension and dread rather than just setting up one jump scare after another. This of course makes it tired and boring by today’s standards.

This film is the story of a little girl who one day grows a lizard face, crawls on the ceiling, spews bile and can rotate her head 180 degrees. Most kids would be thrilled with these abilities, but for some reason this kid is unhappy with it and spends her time in bed instead of chasing the asshole boys in her class around. Two priests show up, a seasoned veteran of exorcisms, and a novice just learning the ropes. The kid says some things probably considered shocking and blasphemous for 1973, and the old priest catches on fire or something. The new priest finishes the exorcism alone, the girl loses her super-awesome powers, and goes back to being boring. The bed is thrown away, I assume. 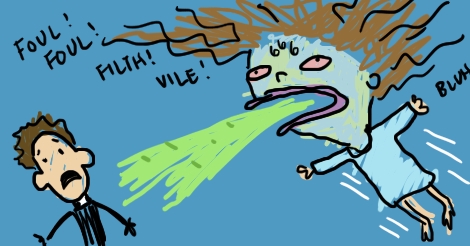 The two things that I think of first when this movie is mentioned is that the writer, Dan O’Bannon, previously wrote and starred in one of my favorite goofy movies, “Dark Star,” and it helped one of my dearest friends realize she was bisexual.

A group of big dumb space truckers find a crashed ship on a distant planet. It’s huge, with a huge alien (not The Alien) with a huge hole in his huge chest. This, of course, sparks their curiosity, and one of the big dumb space truckers sticks his big dumb head in a pulsing pod and gets a giant space crab on his big dumb face. Of course, it won’t come off, so they decide to take him back onto the ship, space crab and all, and leave. With the space crab. On their ship.

So, of course, the space crab has an ovipositor and the baby alien hatches by bursting its way out of the the big dumb guy’s big dumb chest. It scurries away from the dangerous situation, showing it didn’t inherit any big dumb traits from its big dumb host/dad.

The rest of the movie is the alien (The Alien) and the big dumb crew chasing each other all over the ship until everyone except Ripley is dead, and then she ejects the alien into space. Then she strips down and walks around in her skimpy underwear for a while, because that’s what women do in movies written by big dumb men. 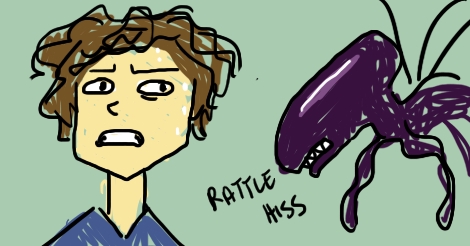 Friday the 13th was one of the seminal movies of the 80’s slasher genre, where you’re supposed to cheer for the killer instead of the stupid kids walking into basements of empty houses at 3am with their only source of light being a Bozo the Clown Glow-in-the-Dark Playtime Fun Ring, because they “heard something.” It’s like none of them ever grew out of their toddler phase where they try to maim and kill themselves using everything you thought they couldn’t get to.

So a bunch of teenagers are at Camp Crystal Lake waiting for the campers to get there, and they spend their time having sex, which slasher movie villains hate more than a woman who can run more than six yards without tripping over her own feet. The villain, Jason, is something like 6’4”, solidly built, wears a hockey mask and carries a machete. Lots of kids get chopped up until the One Girl Who Gets To Live Because She Didn’t Want To Have Sex unmasks him and he’s really Jason’s 84-year old mother and she’s apparently been taking lots of Centrum Silver. I expect the kids arrived the following Monday to a camp full of bodies and the lone survivor rocking back and forth and muttering “sex bring pain” over and over. 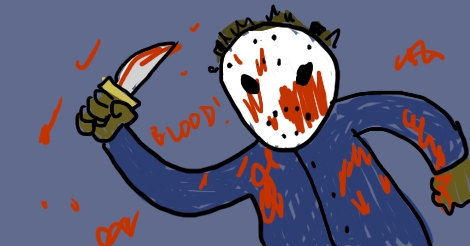 This is a movie that surely caused a boom in the popularity of home inspection just as “Top Gun” would drive up Navy recruitment seven years later. Never buy a house without at least having a guy wander around with a dowsing rod or something. Ask for the Carfax.

A young couple get a sweet deal on a house.  Instead of buying it, painting the shutters, and reselling it at a tidy profit to the next house flippers in the chain to help make homes unaffordable for for anyone making less than six figures a year, these people want to live there. So they move in and ask a priest to bless the house. The priest tries, but is driven out by some flies and on the way home is crushed to death by a life-sized, seaworthy replica of the famed windjammer “Cutty Sark” falling on him from the clear blue sky.

The couple start slowly going mad, as most couples in New England do, but their friends and family become suspicious anyway. A nun visits but is soon sent flying from the property, being mysteriously tied to a large red rocket with the word “ACME” on the side. A medium comes, and, by asking the neighbors and opening the trunk the couple found in the living room when they moved in that was labeled “nothing of importance,” learns that the house was built on an ancient First Nations burial ground, was then inhabited by a practicing satanist, and later by a guy who looked exactly like the husband. He killed his entire family, and then the pizza delivery guy upon realizing he had accidentally ordered from Papa John’s. The house is packed so full of evil that you’d swear it was hosting a $5k per plate NRA fundraising dinner. The couple flees and the medium writes a book about the whole mess. 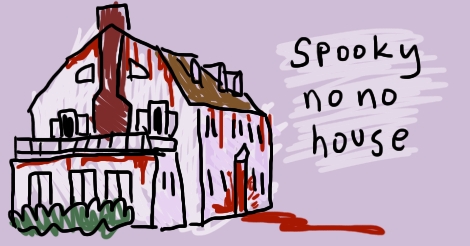