The Complete and Possibly Truth-Stretching History of BOO!

Though it was forged in MSPaint by one man, the story of BOO! was a tale that has existed in the minds and the souls of people world-wide for generations. It rolled off the tongue of every schoolchild, it had its story told by graffiti in back alleys, and even the halls of rest-homes echoed the tale. Knowing the significance and history behind this story, I knew I had to do something. I knew that I had to bring this tale to life in a way never before seen. So I sat down and for many years I painstakingly transferred this legend into the form you see today. When BOO! was first introduced to the internet, it was during simpler times. It was during a time where morals were valued over gold, and children argued if they DID NOT have to wear their school uniform. 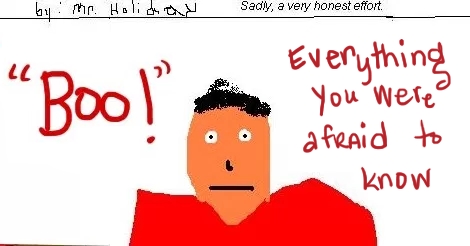 I was a young man then, but I was always told I had an “old soul.” I was never quite sure what this meant, but I do have to admit that I was on occasion frequented by visions, visions of the past… some going all the way back to 2003-2004. Though the times and places changed, many things in these flashbacks remained constant. A dead wife, a parlor room, a poorly executed pun, and a wrongfully accused butler who remains very helpful even though he was just accused of murder moments before. What did all of this mean? Confused and a little scared, I started to seek the answers. I would go on to find them in the most unlikely of places… in a book.

Not just one book, but several books. Hundreds of tomes, newspaper clippings, words haphazardly scribbled onto Waffle House napkins, and Readers Digest entries lay before me. Thousands upon thousands of pages of historical fact, eye-witness accounts, and rampant speculation about what was known simply as “The Bone-Chilling and Thrilling Murder of the Wife of Mr. Barry Boo in His Parlor Room on a Halloween Night, and His Many Questions and a Lack of Answers for Them.” Deciding that this story needed to be retold, as obviously it was my destiny to do so, I first realized that a more descriptive title was needed than the original one offered. So, at the expense of possibly spoiling the story by giving away too much in the title, I bravely titled my retelling of the story as “BOO!”

My plans to republish the story were not met entirely with praise. For the better part of the summer of 2006 I was on the run from a group of small-town farmers and house-wives that were surprisingly heavily armed and somehow all knew the deadliest of the martial arts. It was in the summer of 2006 that I also started drinking heavily and experimenting with substances that brought forth hallucinogenic side effects, but to this day I remain steadfast when I tell you that the two events were not related. It wasn’t that folks were afraid of the story getting out, but it was just that it was something so near and dear to them that they worried that I would somehow ruin it in my daring translation. Kinda like the Transformers movie. Two years later they would realize that I would not ruin it, but would raise it up to levels long thought to be impossible.

In the Fall of 2008 I sent the above strip to Jeremy Gregory. It would be weeks before I heard back from him. Worried that he disliked the material I had sent, I was nervous when he finally signed back on AIM. It turns out there was a completely different problem. He was so scared by the material sent to him that he went into seclusion for three weeks. He lost his job, most of his hair that wasn’t already thinning, and lost 20 pounds (putting him down to around 280) during the ordeal. To this very day he still has a fear of shitty puns, and commitment to relationships.

There was a point in time where BOO! almost did not make it on to OMGJeremy.com. Aside from Amandoll’s instant jealousy that there was a comic of greater quality than her own, there was fear. Fear that our readers were not ready for a work of this magnitude, or that something so serious and impactful would ruin the site’s image of being shitty and pandering to the unwashed masses of the internet.

The first piece was meant to set the tone, yet without dragging along and bogging the reader down with a lengthy origin story. Though the original work began with 40,000 or so pages of the main character’s background, from his birth to where we find him in my work, I decided to keep it simple. Jeremy also insisted that comics be no more than 3 panels at the time, as if we were in some great war and he didn’t want to use all of his webspace ration vouchers.

I thought it best to open with a joke, but not just any joke. I knew that the folks who read this needed to realize that they were dealing with high class and something the likes of which they had never seen on OMGJeremy.com. I was setting out to do a website first… making something people could laugh at and actually enjoy. The reaction I got was either one of absolute delight or absolute terror. The letters of praise were equal to the letters of hate mail from parents stating that their children no longer slept and some even went so far as to send me the eyelids their children had cut off in an effort to prevent dozing. I’ve got a pretty sweet necklace now.

The second episode is heralded by many to be the best of the three. So much ground was covered in this epic (I am using the word the way it should be and not the way I see people STILL using it OVER AND OVER and constantly pissing me off) that I nearly thought it would have to be split into two separate entries.

Not only do we get a very detailed glimpse of the infamous Parlor Room, but we are introduced to the Werewolf Butler. Werewolf Butler was not always originally a werewolf in the early works. He has been everything ranging from a slender Hispanic man to a trashy wire-frame 3 foot tall butler the likes of which you find at most Country Stores. I decided that from what I had read in the early texts (the butler is presented as having a very hairy chest and arms and is roughly 6 foot tall) that it was probably meant to be a werewolf. I am glad that I was pointed in this direction, as I feel my skills at rendering canine/human form into art were finally put to good use.

All Good Things Come to an End

Although this comic, my personal favorite, has been lost for all time, I can explain the importance to you with word-pictures, so do not set out to openly weep in the streets just yet. Startling conclusions and endings were left open just in case a quick cash-in sequel was needed, this episode offered a very fulfilling yet startling end to the saga. Our character finally comes face to face with the killer of his wife, only to realize it was himself, but it was a dream, but he is dead. Though the ending leaves open the question of whether or not the character really is dead. Perhaps he is just dreaming about dreaming and then realizing he is dead. Perhaps he is just insane, or perhaps he got into Amandoll’s unlabeled pill bottles and is suffering the consequences.

It should be noted that this installment was in fact a censored version of my original work, so perhaps it was Destiny that caused it to go missing. The deep shame and betrayal of having to rein in this tale, to go against my ethics as a journalist and an historian, in order to be allowed to speak this truth, may have brought about its own disappearance. Better to be lost forever than to remain in an imperfect state. The last panel had far less blood than it did at first, and originally his penis was hanging out.

What really happened may in fact remain a mystery forever… well no actually I made two more trilogy continuations, but the mystery is still fairly mysterious, according to many people. There is even rumor that there could be a telling of what happened BOO!fore soon. The sneer campaign will get the honor of unleashing that upon the world, now that the old OMGJ is no more.

After two years, it was apparent that BOO! had had a very strong impact on many people, so I made more, which will themselves be the subjects of future article-documentaries such as this. My inbox remains full of pleas for more episodes, marriage proposals, threats from Amandoll, and sex-pill emails that everyone tells me are spam but I will just have to find out for myself.

What direction will BOO! take over the coming years? Will we ever truly realize what happened to the main character? Who will be starring in the movie version? These are just some of the many questions millions of people have asked themselves, though I find it rather pointless to ask yourself a question.

I can only say that you should keep your eyes on Sneer Campaign, especially during the Halloween season. You never know when an old friend, his parlor room, and his censored hanging-out penis might show up. 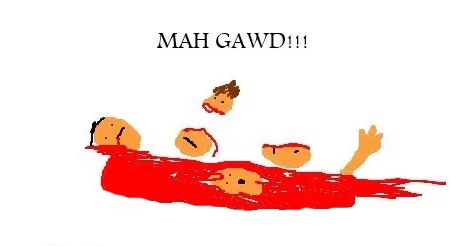