Groundhog Day is Upon Us

Tomorrow is Groundhog Day, and little rodents around the country will be telling us whether it will be an early spring or six more weeks of horrible but I guess pretty mild winter. We will creep up on them in their cozy little habitats, throw loud parties and make weird speeches as we wait to see if the poor little fella will have a shadow.

The most famous of these guys is the one and only Punxsutawney Phil. As we look to the noble rodent after this tepid, confusing season, we (most of us) hope for an early spring. Please, Phil, don’t see your shadow! Let’s hope for whatever sort of weather would result in this natural occurrence not happening.

O humble Phil, king of the meteorologists of the animal kingdom! O Phil of the clouds, of the rain and wind, of the cold and heat. Phil of the ages. Sing us your song of fear and hope. Your silent song of understanding. Tell us, oh wise one: what will the weather be? 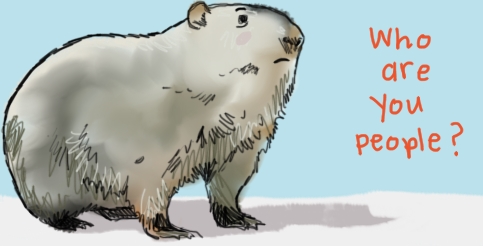 You can check out the short documentary, A Holiday for Everyone, to see Phil in action. According to legend, “On February 2nd, 1887, the first official trek to Gobbler’s Knob was made and Punxsutawney Phil delivered his first official weather forecast.”

After some probably unnecessary studies of the previous predictions, Punxsutawney Phil is said to have a 39% accuracy rate, while overall the groundhogs (which include some Canadian buddies) had a 37% accuracy rate. Duh! They’re groundhogs. That is probably why two of them have bitten mayors in the recent past.

Groundhog Day has been around since 1887, although its origins lie in holidays celebrated even earlier, but it definitely saw a surge in popularity after the eponymous movie came out in 1993. Since then, Groundhog Day has had a new meaning. An almost sinister meaning.

If you’ve never seen the movie and somehow have also never heard about the plot, here it is: Phil Connors, played by Bill Murray, is a dick. He’s also a newscaster. While reporting on Groundhog Day in Punxsutawney, Pennsylvania, he gets trapped by a blizzard and also by Groundhog Day. He relives the day over and over. The director and people who have studied the movie have estimated that Phil spends at least 10 years in the loop, probably closer to 33 years, and as many as 10,000 years, in various estimates (though the movie represents about 23 days).