The humble kazoo often goes unrecognized by many. We’ve all heard of guitars and drums, flutes and trumpets, harps and pianos. But the kazoo is the best American instrument out there. So here’s a patriotic tribute to the kazoo.

There a quite a few instruments attributed to the good ol’ USA. But, do you really consider the electric guitar totally separate from the guitar? Probably only if you play one. And although the banjo was popularized in America, its origins lie in Africa. A jug is also listed, but come on. Sometimes I use my pots and pans as instruments but I am not going to list them on Wikipedia please.

There is a place where you can go that is a magical land of kazoos. That’s right! All you have to do is get to Eden, New York, where the only American metal kazoo factory still stands. It’s also the original! The Original American Kazoo Company and Museum is open year round for visits and tours. And, of course, I took one, with the hilarious Jimmy O’Brien. Now, part of this story is that shortly after this trip, I was robbed at gunpoint, of my camera and laptop where I had already uploaded the photos. So, as usual, we have an artist rendition by Amandoll. 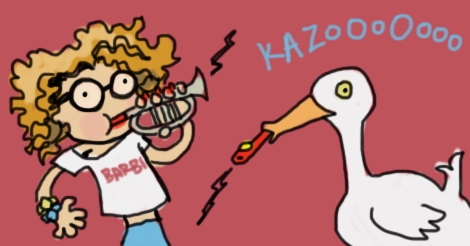 The Kazoo was patented in 1923, which is one of the best years. However, it was first seen played by the amazingly named Alabama Vest, an African-American living in Georgia, in the 1840s. He worked with a German clockmaker to develop the kazoo. If you try to research this information, you may come across a super weird, poorly-made website indicating that the Alabama Vest origin story is not just a myth, but a conspiracy. Thanks internet, you are forever a great source of strange entertainment.

In the early 1900s, some super-genius men decided to manufacture the kazoos on a large scale in upstate New York. That very location is the museum today! The equipment is fascinating, and the tour guide informed us that they make it a point to hire adults with special needs to operate the machinery, which I thought was very sweet! The place was very industrial looking, and as you pass through the little tour area, each step of the kazoo-making process is described next to the giant equipment.

They also have a collection of beautiful and unique old-timey kazoos, from animal shapes to fake instruments. At the end of the tour, you can make your own metal kazoo and own a part of American history for real. (I obviously got myself a trumpet-shaped kazoo, as pictured above.)