Apparently, the infamous Habbo Hotel was born on July 9, in the year 2000. That’s right, it turned eighteen yesterday, at the time of this article being posted, and ladies and gentlemen, that means the Hotel is FINALLY LEGAL. It can vote, it can smoke, it is no longer jailbait for every seedy person on there because every Habbo is irl over 18 now — I think that’s how it works. And it is finally time for us to tell you about what happened to us once upon a time.

Imagine the world ten years ago. 2008 was a time of optimism, of change. Half of the country felt that the change was a mark of better times to come, always and forever. Dark days were behind us and only sunshine lay in wait. This joy was part of every aspect of our lives. Everything possible was on the up. We were at the Hotel for some reason. It must have been a nostalgia trip because we had been talking about how any time we ventured in, something surreal would happen. And brother, on this night, nothing in the world could have prepared us for the mystery and scandal that would unfold. We were milling around with my friend, Eidam, when we were approached by a stranger, masked and furtive. 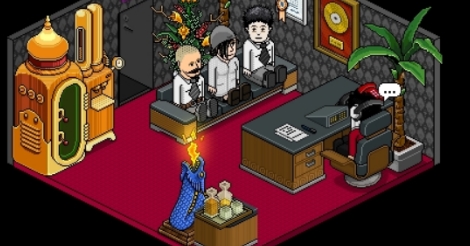 We had seen these characters around before. They seemed to be part of a group, always dressed the same, always with the kerchief around their faces, like Old West train robbers. We would normally ignore them and have our own fun, but on this day, one came to us with an intriguing manner. He seemed to want to tell us secrets, to recruit us into some sort of rebel alliance against this secret society that we had never heard of. We figured that this was part of some ridiculous children’s game of pretend, and played along slightly. Eidam is very good at pretending that he knows more than he actually does, the ol’ bluffaroo, so he gained enough of this habbo’s trust and we encouraged him to show us proof of this world that he was so sincerely trying to sell us on.

We agreed to put on disguises (which meant that we dressed in greys and blacks) and were taken to an elaborate room that looked like a waiting room in an office building. A waiting room that had locked gates and numerous teleporters lining the walls. No one was in at the moment, and it was explained to us that this masked kid had the passwords for the gates, and we had to time it so that we entered and went through a specific teleporter and ran down a hotel room that was just a hall and into another teleporter. We had to time it because even though it was “closed hours,” there were still security guards that worked at night, and they had beats to follow and checkpoints. We laughed then, but we stopped laughing as soon as we saw that the teleporter did indeed lead into a hall, and we entered an office which was then locked so that no one else could enter. WE WERE IN!

As we sat in the luxurious surroundings, on what was said to be a leather sofa in front of a large oak desk, it was explained to us that there was an evil cabal that “ran everything” in the Hotel. They lured in Habbos with promises of jobs and then blackmailed them somehow, in various ways, I guess. They were the Law — nevermind the hobba moderators. There was racketeering, bullying, hired thugs, terrorism, jailbreaks, prostitution, murder, and even suicide. This is when Billy and I both started screencapping things that were being said. 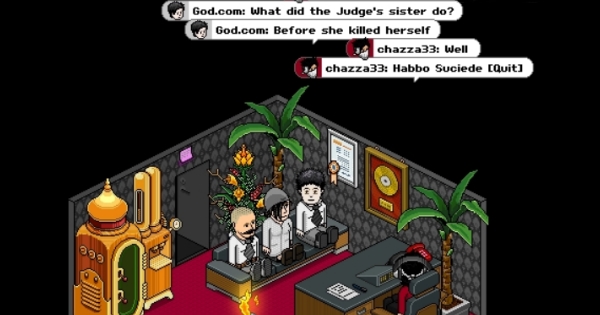 These things had been going on for years! We were incredulous. How could this even be possible? How could a pretend game on the internet hold so much power? Why didn’t any habbo stomp off and say, “this game is dumb, I’m blocking you.” Why did they let it continue? Ten years later, Billy Holiday and I still occasionally ask each other these things.

At one point, Eidam decided to leave in a way that caused the utmost drama. He simply closed the window (pro-tip to any kid out there reading this: you can do that if you want to! Any time!) and chazza33 went NUTS. We helped, of course, by demanding to know what “they” had done to our friend. There was talk of vengeance. There was talk of going after him. Our guide frantically went out into the hallways, seeing if there were any reports filed about suspicious activity or intruders. There were none, but then THIS was revealed: 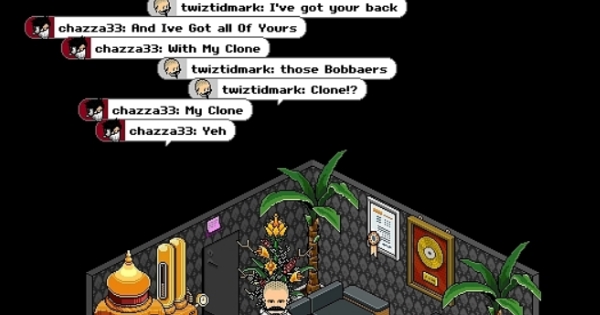 Cloning, too!!! Billy Holiday’s use of punctuation was sincere. He could not believe it. I still can’t. After things settled down, we asked if we were now in too deep to just walk away. We said that we were afraid for the life of our new friend for showing us the Truth. He put his trust in us, assuming that we were NOT undercover reporters who had just been handed a story too unbelievable to be able to print for ten years, at least. Of course, I guess other reporters cracked that rotten nut a few years later, leading to the demise of the Hotel for a moment, but let’s not get ahead of ourselves. We had more important things on our minds anyway. We had resolved to see him unmasked. 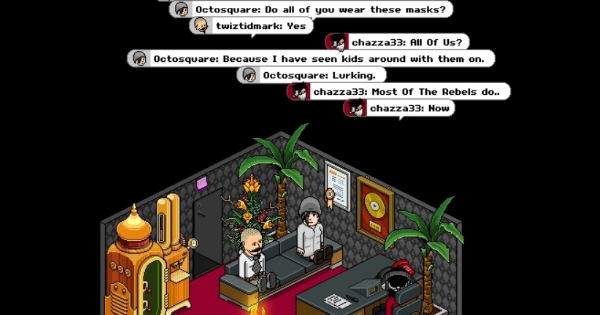 We were obviously immediately interested in the fact that there was a secret organization whose aim was to defeat a larger secret organization in this innocuous hotel chat site. Two in one night!  He then took us to the rebels’ hideout, which was a comfortable enough space that suggested by its size that large groups could gather there — for rallies and PLANNING. 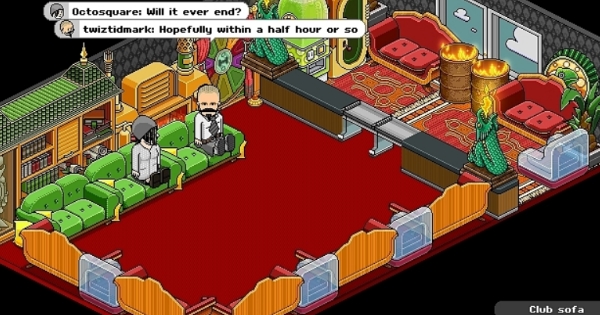 We were being told that the Mafia was behind it all. We never could tell if it was just the chosen name of the group, or if we were being told that the actual Italian Mafia was at the heart of this thing. They have been keeping out of the news for a while, other gangland crimes seem to be at the forefront of the news cycle. Had the Mafia decided to leave tangible drugs and crimes to the new bunch? Had some Mafioso nerd nephew come into the Godfather’s stately office and said, “Godfather, I bring you news of a lucrative endeavor on this thing called the Internet. There are no policemen. We could run this hotel from the shadows.” And so on. We were afraid to question it then, and truthfully, I’m a little worried about wondering that here in this paragraph. But hey, it’s okay because it was also casually revealed that it was a VAMPIRE Mafia that was headed by a group of something like Seven Immortal Brothers. But again, it did cause us to wonder about the real earth Mafia.

WHOEVER it was running things was spending actual human money in order to buy credits which would then control their sea of lackeys. I wouldn’t even spend one single American Cent at this hotel, but someone was paying so much that they would offer jobs that paid up to 10 credits per hour to who knows how many habbos. That’s an investment. That is not something anyone does out of purely good intentions. That’s money that someone was getting a return on enough to think it was worth it. Perhaps that is the most mind-boggling thing of all. 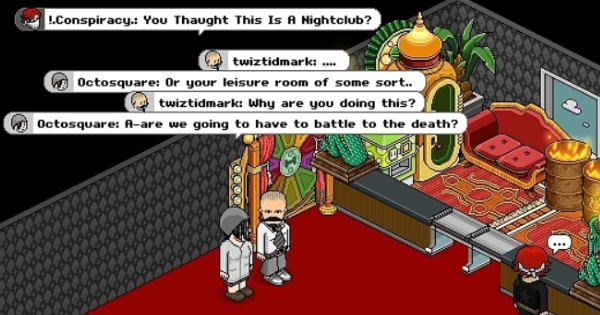 Our new friend began rearranging furni around us, after locking the room. It is a humorous detail, in this limited stumpy world, that the owners of rooms can move things around you, out from under you, cause you to sit where you were not sitting, et cetera. I like to imagine that every room owner has telekinetic powers when in their home base. On this night, however, the sudden changing of our surroundings put us ill at ease. What could come next?? Well, in this case, he just turned it into a headquarters. There were gates and recruitment desks. Despite his inability to spell, this kid had an extreme aptitude with subterfuge, tricks, and conspiracy. Hence his different name, I guess. 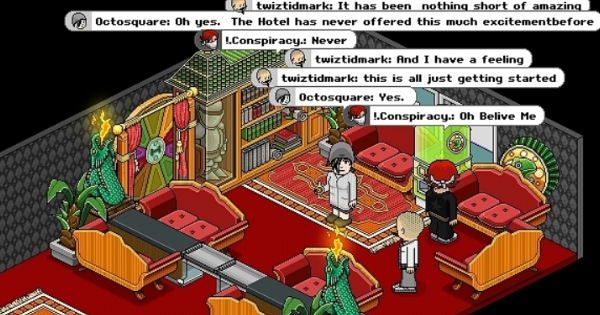 We had apparently earned the complete trust of this strange person, but I can’t say that he had at all earned our trust. We went to bed soon after this, because it was embarrassingly late and we were overwhelmed. The story actually continues the next morning, with AM time drama that unfolded in more familiar surroundings. Billy Holiday’s Suite of Bad Intent was infiltrated and our lives were forever changed, just a little bit. But this rambling anecdote is already pretty long, so I will have mercy on you.

Tune in next time for the thrilling conclusion of our chilling confusion!