The first part of this article described an exposé of unimaginable breadth and scope. It revealed more scandal than we could handle, and Billy Holiday and I decided to call it a night. We figured that we couldn’t even retain any more information, and anyway, our screencapping muscles were all tired out.

We kind of figured that this was going to be an isolated incident. So often, you make superficial connections with other habbos, and you both know that you will probably never see each other again. One or the other will fall off of the face of the hotel and maybe you’ll just never be on at the same time again. It’s just the way of things. As we woke up that next day and spoke on AIM, we were expecting to sign onto the Hotel with no trace of  the previous night’s adventures anywhere to be seen. We were already accepting that our time had passed, even though our main goal had not been achieved. 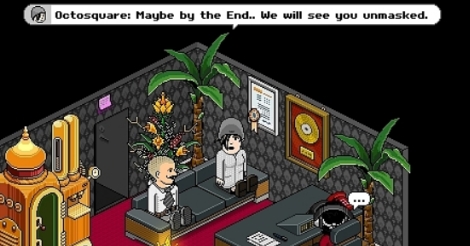 When we dragged ourselves into the Hotel that morning (haha jk we internet-ran to it like excited springtime puppies), we were delighted to find that our conspiratorial friend immediately entered the Suite of Bad Intent, too, as though he had been waiting for us to return. We still wonder why this was the case. Did the Rebellion Rebels court every new prospective member this closely? As we spoke, was the same scenario being played out in personal rooms all across the hotel? Or were we treated as special because there is value in being able to spell and communicate thoughtfully? We will never know for sure, but do you know what we DID find out, immediately, asap, first order of business? That’s right. We found out what his habbo face looked like. 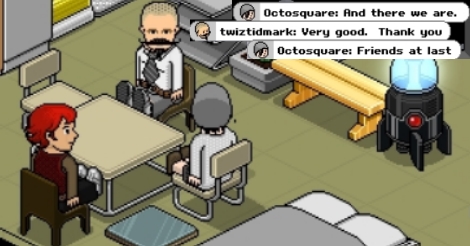 Even though that was the highlight of my professional career as an investigator, and was content, satisfied for the rest of my life, I didn’t immediately sign out while at the very top of my game. Even though I thought there was nothing else that this kid could offer us that could top his unmasking, I was polite and stayed. Just in case. Of course, I am very glad that I did.

“Conspiracy” quickly put his mask back on and launched into business. He called the villainous group the “Dynastnasty Mafia,” which was either a typo or quite a name. A NASTY name. He listed the things that they controlled along the criminal underground on the seedy side of the Hotel, where the rooms were decorated with more opulence or neon lighting, rooms of beds, rooms with one bed that was surrounded by seating. He worried that they had “never been beaten,” which hints at a dramatic, storied history that I really wish I had a written account of, but I do not. And here is a list of the things they were into, because it is much more absurd to see it written in habboland than written with my plain words in a paragraph. 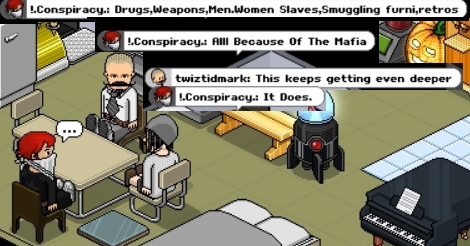 Furni and retros! The most vile illegal trade of them all! Again, Billy Holiday and I were discussing at the time (because you know that we were using AIM to nonstop talk about happenings) that we couldn’t tell if this was a matter for the actual police. Could it be possible that real people were taking advantage of children on the internet? We heard all the time that it is possible, but could even this dumb chat hotel create situations where actual real life children were smuggling drugs? Or was it just like this very realistic interaction I just made up:

twiztidmark: No thank you, I do not partake.

ImmortalBrother1: It’s good for what ails you.

twiztidmark: I said no thank you.

twiztidmark: Oh no I am addicted. Now I will do anything you say in order to get you to type that you are giving me more cocaine!

We didn’t want to be laughed off the planet by reporting to real authorities on something if it turned out to just be something like that, and that’s why we didn’t. If it turns out that we should have in hindsight, well, I think you can understand why we hesitated. We needed more proof!

But in the midst of this backstory and intel, we received some bad news that quickly became EVEN WORSE. The Mafia Company made it known that it knew that there had been intruders in the night. The tension in the room rose immediately. However, seconds later, a moment happened that will forever be seared into my mind as the most honestly surprising moment I’ve had, possibly ever. 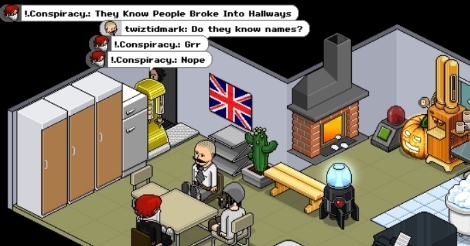 Do you see it? Perhaps you need to look again. Look very closely, over in the door area. Because we were certainly not looking there at all. We were looking at Conspiracy’s stream of anxiety, and our AIM chat that consisted, at this point, of us saying “!!!” to each other. But here, let me show you: 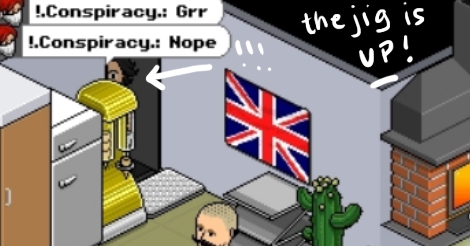 We had a spy. For how long? Who on earth knows, but they had been listening in. They burst into the room at some point, and I’m glad we were already sitting down, because we surely would have fallen over. So much drama! So much backpedaling! If this had been another clone of this person, and I am almost certain it was because there is no way we should have gotten out of that, it was still an incredible feat of interactive barely-fictional immersive improv drama play. 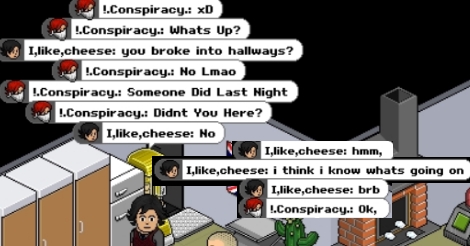 And just like that, cheese went back to their superiors, I guess, and we quickly asked what the punishment would be. Conspiracy said “jail and worse, for me.”  At the time, it had crossed my mind that it seemed odd that a supposed Mafia person knew this kid while he was in a “rebel costume,” but decided that either it was part of their plan, or cheese was aware of the conspiracy, or that the Mafia had them have clones and had them pretend to be an opposing force, or that he simply accidentally had the cheese clone know more than she should have because it was him talking to himself, or none of these things. Actually, I instantly decided that I didn’t care what the truth was. I just wanted it to keep going.

At least Billy and I felt safe because we were still in our disguises. All we needed to do was to change our clothes back to our usual colorful garb and they would never be able to identify us.  Cheese went on to interview all of the Security who had been online at 3AM and chazza’s name was kicked around as “being on the premises.” Our names were either not noted, or we had gone unseen.

During this height of frenzied drama, Conspiracy casually asked Billy for “rights” to his Suite. This is something you can do with friends. It enables them to move furni, lock doors, PICK UP FURNI… Really, if it turned out that all of this was just this guy’s grand con artistry in order to steal furni, well, I almost wish Billy had let him have it all, because that would actually be a brand new level of absurd. He would have deserved the reward. I say this because it was not MY room or furni, of course. 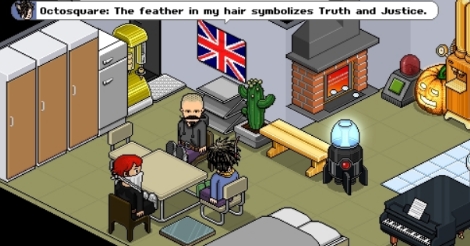 We changed back into our civilian clothes, deciding to accessorize with symbolism and purpose. Billy was all riled up about what they had done to this ONCE fine hotel. We held an impromptu rally wherein we got all fired up over the state of things. We started talking about anyone else we might know who could help. Our friend at the time who was an actual paid employee was never informed. We were a little worried that he might already know all about it. We were a little afraid that he would turn out to be one of the Mafia dons. We vowed to raise an army. 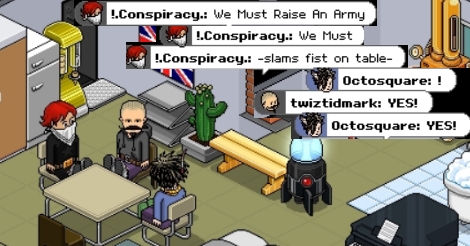 We agreed to make some calls and told our co-conspirator that we had to go (because it was becoming the afternoon) and that we work best under the cover of darkness. By day, we would fit in and by night we would “be ourselves.” We would call up all of our old habbo friends and tell them what had become of our former playground. We would amass a real pretend army in order to wage fake war on something we still didn’t understand. It was exactly the sort of thing that we would spend time on. Time that we would never, ever get back. 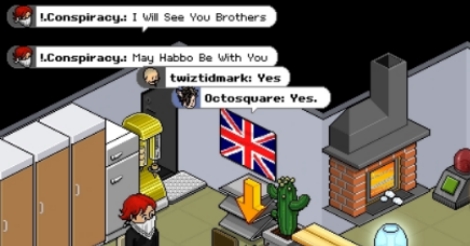 After saying our fond farewells, and repeating our promises to beat this evil thing, we signed out of Habbo Hotel for about eight years.

Did chazza get jailed, beaten, sold into slavery? Was he found out? Was he habbo-executed? Was there some kind of trial with a harsh judgment? Did the vampire brothers feed on him? Was he just an elaborate grifter? Did he just have a complicated personality disorder? Is it possible to ever know?

Truthfully, this is a mystery I don’t mind leaving unsolved.