Everyone in the world knows who the Marx Brothers are, and always will. It is one of the most comforting certainties that there are. However, it is likely that not everyone knows all of the character differences and subtle nuances of humor that each brings to the comedy table. Some people don’t even realize that they were really real life brothers! This is because Chico Marx was that good at performing a flawless Italian stereotype, and Harpo was good at being a terrorpuppet come to life. Groucho appeared to be so acerbic in his wit that it doesn’t seem possible that he could have any close family. And Zeppo must be lost, how did he get into those movies? Also their costumes were such that they all looked very different from one another. In real life, though, they pretty much looked identical with slight variations in age and height.

Caustic one-liners can never go out of style and pretending to be Italian apparently never will, either, for some reason. But Harpo’s rhyme and reason is already unclear in our modern age. In the early part of the 1900s, a psychotic clown was hilarious. Now, it can only be terrifying. Long ago, mute people were things to laugh at, and deranged men endlessly, relentlessly chasing women around was apparently only scary to that specific woman running for her life. Why is this? How has the world become so dour that these things now frighten us? Well, I have no answers for you at this time, but what I do have is a small selection of drawings explaining the decision to make his character one that does not ever speak a line. I hope you like cussin’! 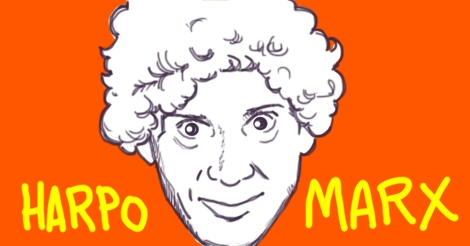 Yes, the real Harpo could speak! Many people just assume he was actually unable to talk, probably because they can’t imagine anyone ever deciding that silence is funnier than speaking. But the Marx Family decided that he should be a mute man, and they seemed to otherwise know what they were doing. Their reasons are pretty compelling and seemed to mostly be based on correctly guessing the tastes of the audiences of the time. But we at the Sneer Campaign know the true reason: Anything his character would have to say would have to match his personality. And that is just too raw for any movie made before 1970.

The first thing one thinks of when thinking of Harpo’s antics is of course his tendency to be an antagonistic psychopath! Direct eye staring, invading personal space, tricking people into holding his leg, and in the earlier films, actually physically hurting people if he wanted to. How would this have changed if he was also speaking to his victims? Shudderingly. 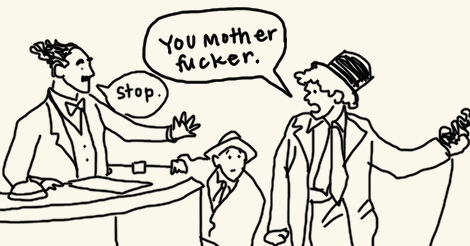 Another “hilarious” facet of his personality was that he was frequently seen running down frightened women. His intent seemed to be lecherous. Was he an implied rapist? That does seem to be the sort of thing people used to find funny, along with other funny things like racism and animal abuse. Ha ha the past was so light-hearted without a care in the world! While Harpo was lewdly honking his horn at any woman-shaped person, what would he have been saying? I’m sure you could guess. 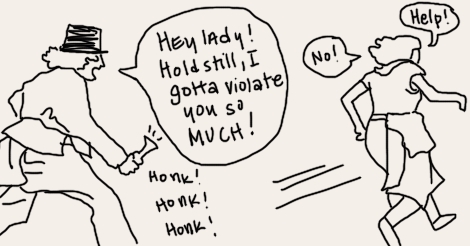 In almost every film, the musical brothers would have an interlude featuring their instrument of choice. Chico would show off his good time piano playing, and Harpo would play his harp. Most viewers regard this as a jostling intrusion shoehorned into an already questionable plot. What they are missing, though, is what Harpo would tell them if he would just say something! Anything! 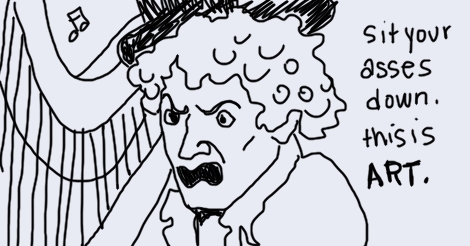 Towards the end of their movie career, Harpo’s character changed subtly from pure terror to part terror. More often, he was a sweet-hearted eccentric full of idiocy and sympathy. This was only achieved because he couldn’t speak his inside thoughts, which had not changed with age. We finally see the full wisdom of the mute decision all those decades ago. 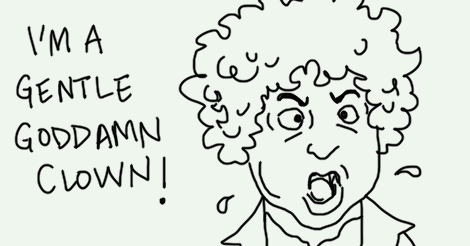 Thank you, Marx Brothers, for choosing to make Harpo the silent brother.