The 2016 Grammy’s may have been last month, but 57 years ago the first Grammy Award ceremony was held. It was called the Gramophone Awards and the first one occurred on May 4, 1959. The Grammy’s were not televised live until the 70s, so us poor fools had to wait until it aired to see the clothes featured in the 1st annual ratings-machine.

In 1959, 22 awards were presented in a simultaneous ceremony on both coasts. A whopping three awards were given to the Chipmunks, . They were for Best Recording for Children, Best Comedy Performance, and Best Engineered Record (Non-Classical). Go Chipmunks, you might have been the worst gimmick ever done to music at that point in time, but you were given AWARDS so what do I know! The Grammies are obviously qualified to be music tastemakers. 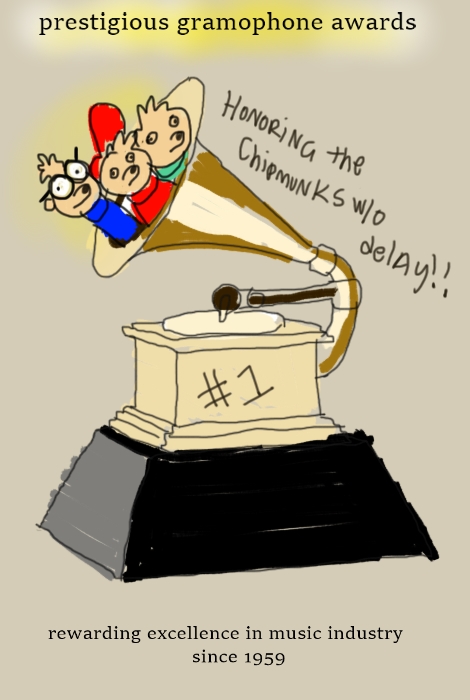 The Grammies started after the Hollywood Walk of Fame project. While compiling industry leaders, the recording artist committee realized that many of them were not eligible. So they created their very own awards ceremony, on par with the Oscar’s.

The gramophone, by the way, was invented by Emile Berliner. He received a patent in 1887 for it, before perfecting various parts. Later, he focused on vertical flight. He was a German-American Jewish inventor. Typical!

And because I am still not over this terrible Alvin and the Chipmunks travesty that I just learned about today, let’s all listen to the best thing to ever result from their existence and try to find peace within ourselves again.