There have been a lot of movie cowboys who have had famous star horses as their mounts: Hopalong Cassidy and Topper, the Lone Ranger and Silver, Gene Autry and Champion the Wonder Horse; but none were as famous as Roy Rogers and his Palomino steed, Trigger. Or really, I should say “Trigger and his hanger-on, Roy Rogers the singing cowboy.”

Trigger was a wonderful horse, a marvel. And he was so famous that he even starred in a comic book series! He could walk on his hind legs, sign his name with an “X”, cover himself with a blanket, had a very good rhythm as a dancer, and apparently, he was even house-trained. He had so many tricks memorized that they ran out of ways to teach him prompts for new ones (that amount, for those of you who are curious, is 150 tricks). He was a professional actor and like any superstar, would perk up as soon as he saw cameras or crowds. Trigger was not a diva, though, and was reportedly as sweet as sugar to almost everyone. 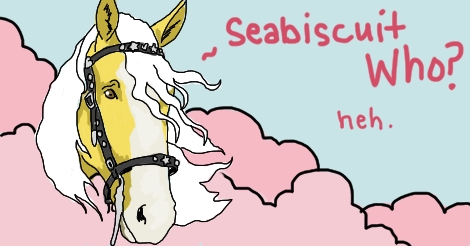 However, in my idle moments of reading about this equine, I discovered several shocking facts!

Trigger was not one horse, but many! This probably would only be shocking to people of the innocent times of when he was at all relevant, but I am not bound by “Time” or “Realistic Expectations.” The original Trigger, whose real name was Golden Cloud, was an extra in a studio corral. He and Roy Rogers got along immediately, and a star was born. Very charismatic, this Trigger was deemed to be too important for stunts or public appearances, so another, similar Palomino was purchased and trained. This was an unregistered horse about whom surprisingly little is known because they wanted it to seem that there was only one, that there could ONLY be one, Trigger. On set, he was referred to as Little Trigger (because he was a little smaller than the real Trigger) and he is the one who had 150 tricks up his sleeve. Also, he was the one meeting fans and attending events such as walking up four flights of stairs to visit hospitalized children. 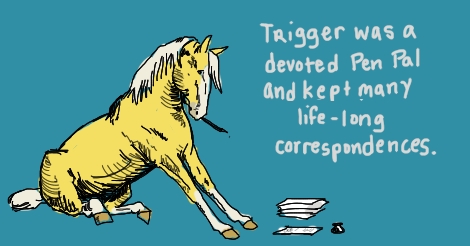 While this Little Trigger was learning an incredible array of stunts, the real Trigger got all of the praise. The real Trigger was prettier, and I guess had more star power for close-ups in movies, while Little Trigger toiled and probably didn’t even get extra treats. Injustice! Classic Hollywood superficiality was already in full swing in the 1930s, and let me tell you, nothing has changed there!

There was also Trigger, Jr. He was a registered Palomino Tennessee Walking Horse and was the subject of his own movie, I guess. This Trigger, Jr also had extras and doubles. In fact, from what I understand, there were more Palomino trick horses than just Little Trigger. There was a whole series of astonishingly talented horses who were never given appreciation! Something must be done!

Trigger in the Closet?

All of the Triggers were said to be stallions, which is impressive because such horses are fairly unruly and difficult to manage. Most male horses are ruthlessly gelded in their younger days and that is the end of that problem. But somehow not Trigger! Why a studio lot would keep a stallion is a little confusing, given the nature of these animals, so perhaps the Roy Rogers Disinformation Machine touted him to be a stallion simply because that sounds more manly, all around. After all, the original Trigger never sired any offspring, and why would that ever be?

Scandal. Perhaps that lovely shining, golden horse with the gorgeous mane and tail and dainty prancing hooves was a homosexual horse! There have been enough accounts that homosexuality occurs in non-human creatures for this to be more than feasible. In the 1930s, there were plenty of gay actors and actresses who had to pretend that they were not. Back then, society wasn’t as tolerant as it is now, even though it seems like society is very intolerant now. It really is better than it used to be!

I do not think Little Trigger sprung-off, either, and maybe Trigger, Jr did a little, but that doesn’t matter to me or my accusations. Anyway, look at this horse dance!

Roy Rogers was a wholesome man with a wholesome family image. It wouldn’t do much for his brand if it was discovered that his horse ate his oats too carefully. If it was revealed that he wore a silken lavender halter to bed. If it got out that Trigger elegantly trotted in a counter-clockwise direction. If Trigger was exposed to be a horse that ambled up and down the docks when the moon was fullest. Roy Rogers very likely kept his horse’s status as a confirmed bachelor quiet by weaving an illusion that Trigger was pure of thought and deed, and since horses couldn’t be legally married in the early part of the 20th century, it would be best to not allow him to produce foals out of wedlock. Roy Rogers did his part to keep America from unraveling.

After the last Trigger died in 1965, whichever one it even was, Roy Rogers decided to have his hide used as a taxidermy work of art. They kept it for a museum piece which traveled around as the museum itself moved around. Unfortunately, the Roy Rogers Museum no longer exists and someone with a spare few hundred thousand dollars purchased Trigger’s remains. That’s right. There is a stuffed Trigger out there somewhere. Wait. There is apparently more than one because Google Image Search has two different taxidermied poses. This is all too much.

Taxidermied anything always weirds me out, but the worst of all of this is that, almost as an after-thought, anything I read mentioned that his dead meat was then sold to be eaten by human beings, and that a butcher was sentenced to five years in prison for selling this meat. What? This is huge!

Because this is the internet, I can’t find any more information about this topic. The Information Superhighway likes to just show me recent news about horse meat being sold in France “triggering” people in the tumblr sense. Or that it triggers a massive outcry of triggered people. Well, I want to know about Trigger’s horse meat! Who ate it? Were they tricked? Did they KNOW. Did there exist (and does it exist still) a group of people who would like to eat a mega-star as a food? Was he steak? Was he burger? Who even had the idea that there was a market for Trigger? Were there people just WAITING for him to die? Did the other Triggers get eaten too? 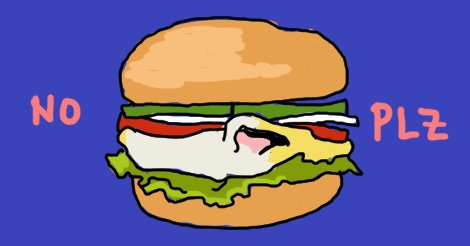 In my imagination, I have gotten to the bottom of all of these questions and the answer is this: Hollywood is a dirty place filled with vices and ruin. Just as there is a cabal of creepy pedophiles, terrible abusers of women and boys, and numerous kinds of illegal sex rings, there IS ALSO a league of people who devour the once rich and famous, and now dead. They do it because it is decadent, and because they have an allegiance to Satan, too. “Some people’s hobbies.”

In my outrage, I have compiled a partial list of stars who were probably also eaten: