X-Files Revival: The Truth is Still Out There

Yeah, I know, that’s a stupid, unoriginal title. But we’ve all been so excited for so long about this reboot! Haven’t you been wondering if it was? If the truth was indeed still out there? 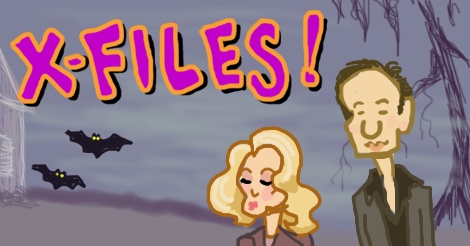 In spite of the obvious effects of aging, which sent me spiralling into a bout of depression involving my own mortality and the unrelenting march of Time, the show outshines the mutated, ancient façades that Duchovny and Anderson have become (I am so, so sorry guys).

The first two episodes of the new X-Files miniseries have premiered and they started by catching us up to the plot, as if we wouldn’t have all binge-watched the entire series right before the new season started to air. But right after the recap, Agent HOTFOX Mulder briefs us on UFO sightings again, which is perfect for getting us back in the X-Files mood. Yes, I believe you Mulder, I do see the government conspiracy now. I see everything. I see the truth.

I will not spoil things for you friends, so read on.

Joel McHale as a conspiracy nut is pretty much the best thing I could have hoped for. I love Joel, I love conspiracies. His character, Tad O’Malley, is perfect.

The episode starts with them, for some reason, indulging the nutcase O’Malley by discussing his theories in his car as they are driven around. After some strange and confusing ass-hanging metaphors, they go with him to talk to a different weirdo, who has really horrifyingly disgusting scars.

And here’s where it gets X-Filesy. I am not going to describe anything else to you. Not the plot, not the glorious back and forth between Scully and Mulder, and not even a discussion about whether Scully’s shoulder pads should be much, much bigger. The reason I will not do this is because it is your duty as an intelligent, responsible, and patriotic American, to watch it yourself.

Currently, you can find the first two full episodes for free on Fox’s website. Spoiler: The Truth Is Out There.