Laika and the 30-foot Billboard

Hold up, everyone. We’ve got a brand new celebrity on the scene! We are excited and very pleased to announce that finally, FINALLY, we can brag that we knew a superstar before they were known. Finally, someone we know has risen from rags to riches (eventually riches, we assume). From the streets, abandoned, from NOTHING, this lady has become the toast of New York City, probably. Laika has made it. 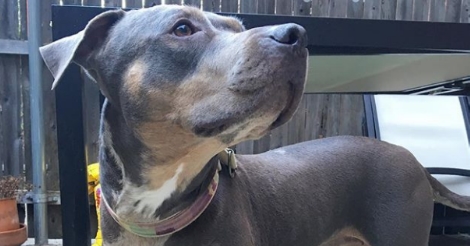 You have been introduced to Laika before, but you deserve to know a little more now. Originally named April, she was adopted September 21, 2014, from the New York City Animal Care and Control, in Brooklyn, NY. She was most likely about 1.5 years old then. This star is 5.5 years old now and is affectionately known as “pig” or “piggy.” Her namesake of course is Laika the Russian dog who went to space, and was also a rescue. Laika means “barker,” fyi, but our friend here isn’t so obnoxious. She’s a good dog.

Her hobbies include palling around with her brother, Tembo, collecting and playing with all of her toys, and eating. She is now a professional model and you should probably keep an eye on her future philanthropic endeavors. Her first gig is as one of the faces for the newest ACC ad campaign. Soon to be known as the Tyra Banks of Dogs, Laika is a similarly unstoppable force who is out to change the world for the better. And yes, we plan to ride on her coat tails.

Now emblazoned on a 30-foot billboard in Times Square, she and these other beautiful rescues are showing millions of people that they have been saved right there from NYC’s Animal Care Centers. These “boroughbred” dogs are ready to be adopted at any time! Well, not the ones in the billboards, because they’re famous models now. 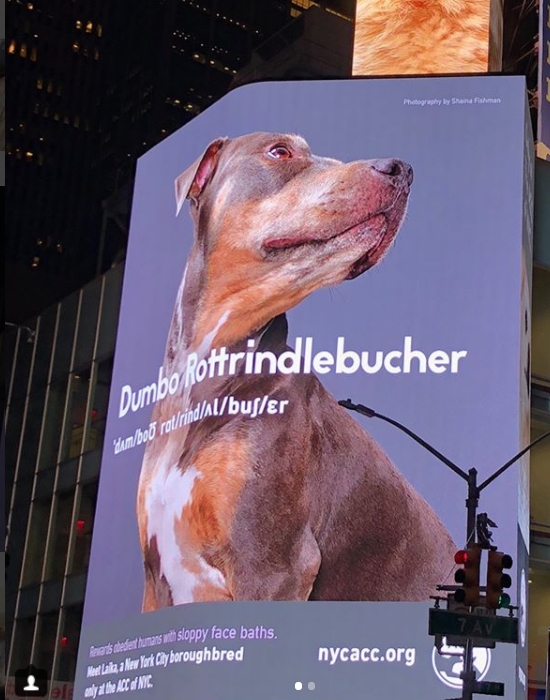 Welcome the NYC Boroughbred! Announcing the biggest thing to happen to homeless animals in NYC since the invention of the bone, catnip and carrots! One of the worlds leading creative agencies Wunderman teamed up with ACC to create not just a campaign, but a movement. This movement would not only re-define what it means to be a NYC pet, but would capture the attention of 8 million citizens, many of whom are unaware of the wonderful animals waiting for homes in our shelters. Our message is simple – New Yorkers are unique. We are strong, resilient and proud. The same holds true of our animals. Every single animal and every single New Yorker has their own back-story, their own lineage, their own ‘look’ and yet all share an unbreakable devotion to our city that sets us apart from the rest of the world. In short, New Yorkers are a different breed. That’s how we came up with the term ‘boroughbred’.

Let’s just all rush out and adopt animals in need. Who knows when we might be helping the next supermodel pet and be swept along on the glamorous, glitzy rise to pet stardom! Although, each pet is a star in its own right, I guess. I’m totally not going to start shaming the cats that live here for not also bringing light to Times Square, and light into the hearts of New Yorkers and tourists, by having their big faces on amazing billboards. It’s not their faults. But I mean. Maybe they could try harder is all I’m pointing out here.