If there’s one thing we can count on humanity for, it’s us doing what we think is best for us at the moment no matter what. For example, studies show that two-thirds of all automobiles in junkyards have worn-out horns but blinker bulbs that have never been used. In fact, no turn signal bulbs have been manufactured in the United States since 1961; they’re just pulled from scrapped cars and put directly into new ones. The cockroaches that shall inherit the Earth from us in about five years will still be using them in their vermin wagons.

Many people, estimates vary from approximately 1 to 99 percent, believe in some form of spirituality. This can take many forms, from collecting weapons-grade scented candles to replacing the exhaust system on your lifted full-size crew cab pickup with devices that make the engine louder and spew black smoke like a violently deadlocked papal conclave. The Romans believed in a single specific god for just about each and every specific element of their lives, because they stole it from the Greeks. So I’m stealing it from the Romans, because the Greeks gave us pitas [citation needed]. Here are some of the gods who help us through modern life. The previous list can be found here. 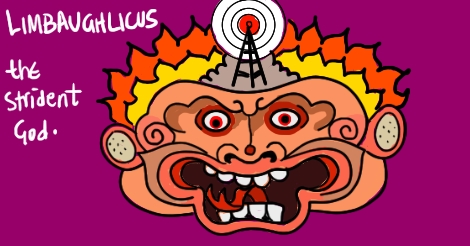 People love to talk. We have radio stations and TV shows dedicated to just yammering on about anything and everything, up to and including what other people are talking about. We are masters of waiting to talk with barely-restrained impatience so we can enlighten others with our critically important opinions of every other person on earth, most of whom do not live up to our exacting standards. Limbaughlicus tells us that we must enlighten others with how they should act, think, feel, identify, and believe. We have our lives all figured out, so who knows better than we how to fix everyone else? I mean, some of these fools don’t even realize some of these character flaws are problems that bother us, much less know of our moral and intellectual superiority. This god is powered by a deep abiding sense of self-righteousness. 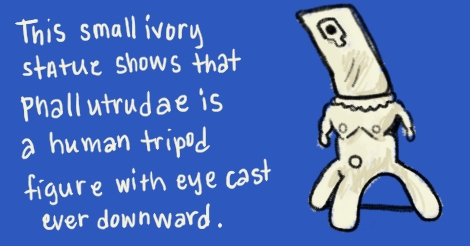 Ever since the first caveman taped a walkie-talkie to a Polaroid camera, we humans have longed to take pictures and send them in the place of conversation. Cell phones have revolutionized this, enabling photos of cats and Thai food to cross the globe at the speed of light. Indeed, it has revolutionized all communication. But when a man talks to a woman, how does he make a good impression? Men are forbidden to have personalities beyond football, beer, and socket wrenches, so conversation is out. We become confused and scared. How do we let this woman know we are a confident, powerful choice of mate? Phallutrudae inspires us to remove our pants and send a picture of our genitals to every woman we come across who did not raise us. Talking is for halftime. Tribute is paid by the mental and emotional scars it visits upon women and girls. 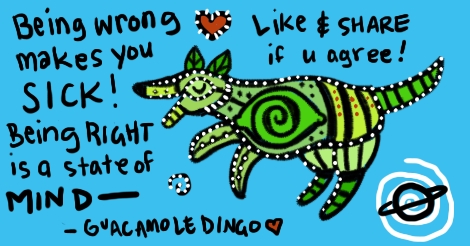 The Law of Internet Veracity states that whatever you find on the Internet is true if you want it to be, or fear it to be. Anything that makes you feel uncomfortable or question your beliefs is of course a filthy, malicious lie by people who want nothing more than to hurt you for their own gain. That’s how we know that vaccines are laced with chemicals that cause fetal scurvy like sodium chloride and that Breitbart is the only information source with the integrity to tell it like it is. The Guacamole Dingo inspires us to find the information that feels right and spread it far and wide for the enlightenment of others. This is how we know that Barack Obama wasn’t even in the White House on September 11 for some sinister reason, boiled salami detoxes are good for balancing our humors, and all we need to cure cancer is a distillation of virgin tree sap and almond husks. This god is worshipped by making purchases from his online store. 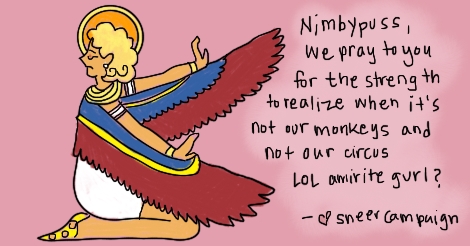 Property values are important. Without them, we might not turn a profit when we have to short-sell because some minorities moved in down the street. Society needs dumps, for our five-year-old appliances; prisons, because sometimes black people leave their homes; and obsolete power plants, because we need reasons to keep burning coal. But where to put them? The ideal place is close enough to be convenient but not so close we have to be impacted by them. So we vote for representatives who promise to give us these things, but put them elsewhere so they’re someone else’s problem. It’s sad that some people in our nation of plenty don’t have happy lives and don’t have homes or food, but why do we have to drive by them every day? They’re unsightly and depressing. Nimbypuss is empowered by things like “lifehacks” involving parking valets. 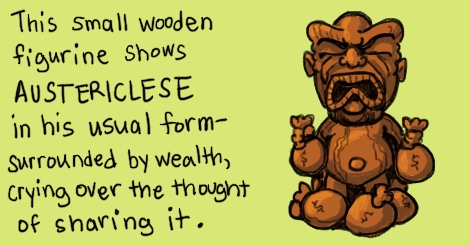 As we all know, any malady that that’s not causing visible bleeding is an obvious and pathetic failure of both willpower and character. That’s why we have laws telling doctors how to prescribe painkillers. Those decisions have to be made by people who know what they’re doing. So, too, with defunding things like mental health care, SNAP, school lunches, and Social Security. People with glaring character defects shouldn’t get free vacations where all they do is watch talk shows and have unwanted children. Every hundred thousand meals is one less bomb we could be dropping or ten fewer ICE agents arresting desperate parents waiting on their children to have critical surgery. And that’s just not a country worth living in. Austericlese is honored whenever a single dime of taxes spent on anything but war is resented. 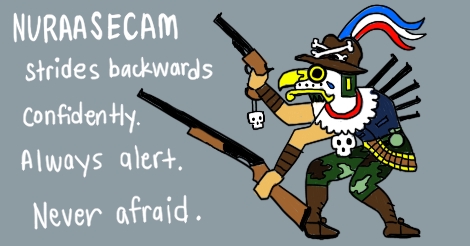 An armed society is a peaceful society in the same way that the Cold War was a productive conflict. Supplicants to Nuraasecam know that the wisest and only way to bring out the best in people is the imminent threat of violent and lethal reprisal for any transgression, from robbery to looking like you might somehow be Muslim. The Wild West never ended, and brave white men never know when they might have to saunter into a saloon and open fire in their quest for the cattle rustler who shot their Paw. Laws about guns are irrelevant, as criminals don’t abide them, but this logic only applies to gun laws. Laws preventing homeless people from resting, sick people from getting medicine, and women from making healthcare decisions for themselves are still necessary and just. Nuraasecam is venerated by the enactment and selective enforcement of “Stand Your Ground” laws.