Mark Twain was born on November 30th in the year 1835. His name then was Samuel Clemens but he obviously changed it at some point. According to this documentary I watched about him once, he had an exciting life and a complicated personality. I encourage you to go on ahead and learn more about him for yourself. He was also a humorous man, and if anything happened in the world, the newspapers would ask him for his opinion, because he was pretty good about only speaking in quotable soundbites. Later, people would gather these quips into quote books, so that we could always learn from his eternal, universal wit and wisdom. Also, he wrote books and stories. 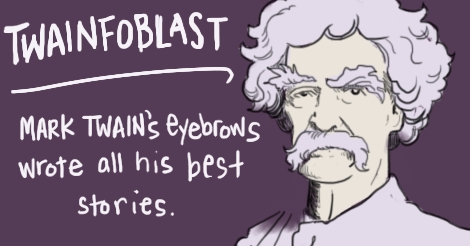 I was made to read a few of his books in school — I assume we all were. And I really hated Adventures of Huckleberry Finn. I know it was “important” for a bunch of reasons, but I hate books written more or less phonetically. It was a pain. I don’t remember anything about it aside from how much I couldn’t stand how river people of the 1850s spoke. I can see how it was so amazing, or whatever, that he represented people from all classes and how they spoke, but I just couldn’t take it! Anyway, there have been a couple of short stories that I HAVE particularly enjoyed. One is “The Facts Concerning the Recent Carnival of Crime in Connecticut” and the other is The Mysterious Stranger.

Many of you will recognize the Mysterious Stranger as the short and incredibly traumatic scene from the 1985 claymation film, “The Adventures of Mark Twain.” Maybe you were warped by it in your childhood, or maybe you only have seen it from the many times we keep linking to it in so many of our articles. Or maybe, if we’re all very lucky, this is the first time you are ever going to see it, right now. We can all watch it together. See you on the other side.

Wasn’t it beautiful? So many subtle expressions in clay. That Satan is so serene and pleasant. There has never been a better voice for anything. I might actually willingly listen to audiobooks if that was the voice reading. I would listen to everything that voice had to say, forever. Everything about it puts me at ease and I wish I were on that island in Nowhere with that angel right now, playing with dumb little villagers. Sigh. A girl can dream.

In the short book however, things were not like this clip. It was set in the 1500s or some time like that, in Austria or so, and centered on the lives of these three tweens who were best friends forever. The destruction of small clay people was a very small, incidental scene right at the beginning of their friendship with Satan, and it horrified them as it horrifies most people. But he charmed them right back into staying, and not minding, and wanting desperately to never being away from him ever again. He leaves abruptly all the time though, to do actual important things, he claims.

Satan, it is also necessary to note, was not a terrifying being who waved around a face mask. He is described as an uncommonly attractive young man who is mannerly and blithe and perfect and occasionally condescending and snide. Sometimes he relentlessly shames the kids, and lambastes all of humanity, and cruelly and derisively laughs himself sick over the folly of man. Most of the time you can’t really tell if he is lying or if he doesn’t care or if he is just enjoying being manipulative. I can’t even tell if it’s done on purpose or if it’s just inconsistent writing, as apparently this story was published posthumously, from notes from a few different drafts, with filler supplied by some other writer(s).

There is a lot of Twain exploring his own thoughts and philosophies on human behavior and religious hypocrisy in the story, but you can just skim those parts. It can get sort of topsy turvy upside down preachy at times. But the best sections are the scenes where Satan and his boy groupies encounter other townsfolk, and he “accidentally” ruins life after life. It’s so delicious.

If you haven’t read it before, I recommend reading it whenever you have a chance. And if you happen to be a big hot shot Hollywood screenwriter, I encourage you to make this story into a beautiful movie. Feel free to message me in order to discuss casting decisions, and for my notes on how the story could be streamlined and improved. Believe me, I’ve thought it over plenty.