Marx Bros. for the Uninitiated: Part 3

So here, friends, is an introduction to the Brothers Marx (part 3). These intros will not tell you much about the movie specifics, because you need to watch them. These movies are not about plot or character, they are about The Marx Brothers. 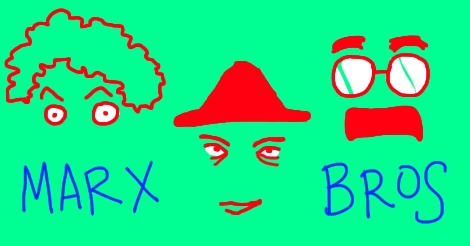 Since they made so many wonderful films, this is part three of your introduction for the uninitiated. We will look at the Marx Brothers in general, and last feature films made. I have included clips of them all!

After all that work the boys did, they were starting to wind down around now.

The Big Store was meant to be their last film and they announced their retirement prior to its release. However, due to large gambling debts, Chico convinced his brothers to make two more movies. After that, some of the brothers, especially Groucho, did appear in more movies, but no longer together as The Marx Brothers.

In these final films, the personas of the Marx Brothers are about the same as before. However, knowing that they are the last, it holds a bittersweet aspect that may not have been felt back in the 1940s. Farewell, Marxes.

Well howdy! In this romp over to the fabled West, Groucho plays S. Quentin Quayle going out to hit it big, gold-style. On the train there he meets Joseph and Rusty Panello, played by Chico and Harpo respectively. The three pretty much accidentally scheme their way into a valuable deed, uniting a lovely couple as well, because of course there needed to be a love story.

Amusingly, the marketing stills for this movie featured the screenwriter, Irving Brecher, posing as Groucho. Much to everyone’s surprise, you really can’t tell at all. The clip below is of an adorable song, and adorable Groucho singing some backup. It might as well be a lullaby.

This was my favorite Marx Brothers movie as a kid. It would have been my favorite movie at all, but I had already seen Harold and Maude, sorry dudes. Groucho stars as the expertly-named Wolf J. Flywheel, hired to protect the store and investigate some shady business. He gets some almost help from Wacky and Ravelli, played by Harpo and Chico.

There are definitely some questionable parts in this one, such as the African-American quartet singing about cotton-picking at a linen display. However, the scene below has some adorable bonding between Wacky and Ravelli, while they play piano together for a crowd.

A Night in Casablanca

Full disclosure: somehow neither of us have seen this movie. According to the internet, in it, Groucho stars as Manager Ronald Kornblow who enlists the help of Corbaccio (Chico) and Rusty (Harpo). The movie is about stolen Nazi treasures, which sounds pretty strange you guys! Anyway, please let us know if it’s any good. All I know is that the clip below from the movie is excellent and features some superb Harpo antics at work.

This movie, their very last together, is based on a story by Harpo. In it, Harpo plays a character named Harpo. Chico plays Faustino the Great, and Groucho has a small role compared to the usual, as Detective Sam Grunion, without his usual greasepaint, etc. Marilyn Monroe is in the movie as well!

As these happy little weirdos pull of a diamond heist in what may have been their worst movie, we say farewell to our beloved friends from yesteryear. We love you, Marx Brothers.