I recently attended the Mothman Festival in Point Pleasant, West Virginia. For those of you not keeping count, that is TWO Mothman-related activities this summer, alone (three actually, if you count that I watched the Mothman Prophecies with AlexT). This means that I am not just an expert anymore. I have graduated to being the foremost mothmandollogist in the field of Mothmanology. 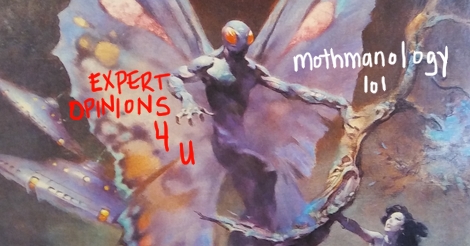 The Mothman is widely known to be a harbinger of death, an omen of destruction and hard times. He may not be seen bouncing off of porch lights, but he does share other characteristics with the common earth moth. Now, some moths only have a life cycle of thirty days, but it is supposed that the Mothman, being a large variety of creature standing at or above six feet in height, lives at a considerably longer span.

Thankfully, this is a rare creature. Unfortunately, however, this means that it is difficult to study its biology. Some things are still open for further observation, but we can extrapolate some basic facts based on what we already know about other moths. He is most likely related to the Luna Moth, being both large and symbolic of death and life, respectively.  They are the yin and yang of the mothly realm. 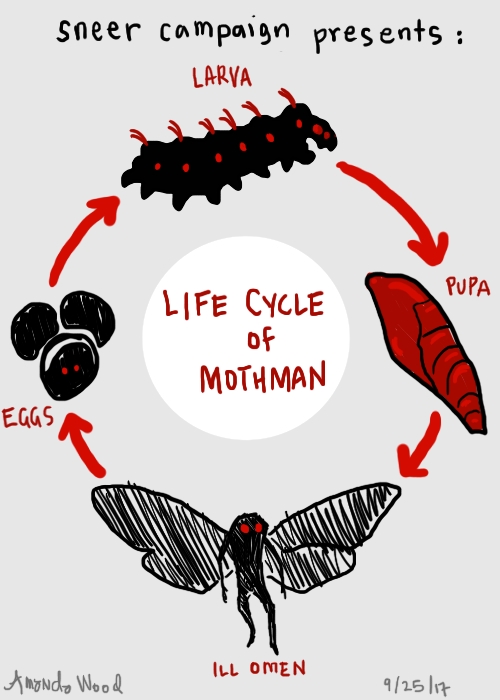 Egg – The Mothman first emerges into the world from a small clutch of eggs that had been laid under an ill-fated bridge decades before. The eggs are shiny and black. Hobos and tramps who recognize them as terrifyingly large insect eggs usually throw themselves into the river or ravine in fits of suicide. The Mothman brings grave misfortune even before he hatches.

Larva – The first act of the Mothman Caterpillar is to eat the unhatched eggs of his siblings. There can only be one Mothman at a time. He eats voraciously and he grows rapidly; his skin will split several times as he eats important bolts of the structure he was born under. Whether or not the bridge falls is left to fate and the watchful eyes of the county safety inspectors.

Cocoon – After a mere week and a half, the Mothman stops eating and looks for a safe place to make a cocoon, usually under the same bridge, but sometimes he will choose a remote train trestle. Making sticky red thread from a hole near his mouth, the horrifying caterpillarman begins winding the thread around his five foot long, soft and bloated body. One week later, a pupa, with a small Mothman growing inside can be seen, if you are a cursed soul. The Mothman secretes a “juice” in order to soften the cocoon so he can push his way out!

Mothman – At first, the Mothman’s wings are soft and crumpled, so he skulks around in the catwalks of his host bridge. After twenty minutes, the wings are full size, but not yet dried. Once the Mothman’s wings are dry, he opens them and waits until nighttime. Once it gets dark, the Mothman will begin his reign of terror, appearing before hapless and confused victims, following them as they flee, and letting them all know that something bad is going to happen. However, as the Mothman has no mouth, he doesn’t possess the ability to say what exactly is going to happen.

After whatever devastating accident occurs after about a year of fluttering hither and yon, the Mothman lays a clutch of eggs in a secluded location and dies a natural death. The circle is complete.