In the unending quest to understand all of the mysteries of the world, we are perhaps not as tireless as other people out there. Our lives are more dedicated to the pursuit of sneering, and also laughing (both kindly laughs and laughs that are not so nice). So a lot of the time, if we find ourselves delving into mysteries… well, maybe we aren’t being as studious and serious as the nice people who get interviewed in TV Documentaries.

There are loads of documentaries and books and even a whole movie starring Richard Gere of all people about the Mothman. AlexT and I watched one of those documentaries the other day and decided to do a little investigating of this mystery on our own! We put on our investigation bonnets, slapped a mixed CD filled with summery music into a rental car, and took a road trip straight to the Mothman Museum located in Point Pleasant, WV! That’s really all we did. We took pictures. 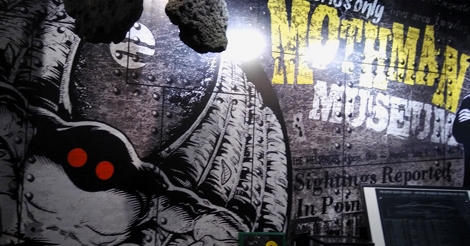 The museum consists of a gift shop and a room of newspaper clippings, movie props, and costumes. But we learned all that we needed to know to become experts. We have solved the mystery of what this thing was that tormented the good folk of this town. But first, we will tell you what it is not.

Initially, you might think that the terror monster of West Virginia was a super villain from a comic book. You might believe that there was a toxic waste spill and a custodian melded with a moth and sought vengeance across the land. However, newspapers named it after some actual comic character for reasons I am not very clear on. “Newspapers,” amirite? Always trying to make the wildest of headlines.

A Man Consisting of Hundreds, Thousands of Moths

You would be wrong if you thought that in the year 1967 or so, a small city’s worth of moths decided to work together by standing on each others shoulders and holding their little feet together in order to take on the appearance of some bipedal man-thing that stood over six feet tall. That is just not a thing that moths do, not even if they wanted to have a laugh and freak out people. 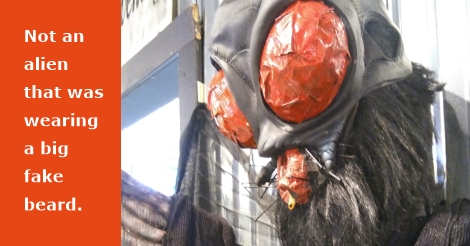 At the same time as all of this was going on, there were also many sightings of UFOs, or at least lights in the sky, in the vicinity. I guess they were mostly regarded as objects that were unidentified, so UFO is accurate. Could the Mothman have been a vacationing alien family’s pet that had gotten loose and the aliens were hanging around, trying to get it back into their spaceship for a little over a year? Nice try, but no. It is widely known that aliens never bring their pets along on long distance trips. And he wasn’t an alien, himself, obviously, because he isn’t grey with big eyes! Well. I guess he was. But not the RIGHT KIND of grey with the right kind of big eyes!

Many skeptics have put forth the notion that people were being frightened by an unusually large owl, and in their panic, imagined it to be preposterously large. While we all know that a terrified mind can make your own eyes into twin liars, that would be quite a stretch for people who live up in them thar hills, and who have no doubt seen plenty of owls in the night. Owls do not have glowing red eyes, and they are not known to follow people to their homes and stare through the un-curtained windows, staring, staring at the people within. I have never read of this behavior in any owl book, so it is out of the question! 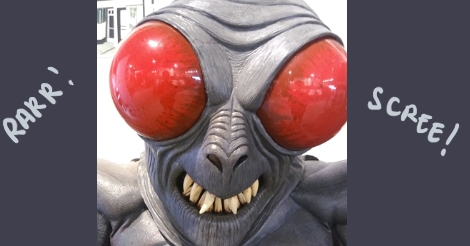 As the Mothman’s appearance came before the local tragedy of the Silver Bridge collapsing and killing forty-six people, there are some who believe that he was some spirit that foretold disaster. The documentary we watched specifically said “thunderbird” but I thought those were supposed to be so enormous that they blocked out the sky and had nothing to do with being a harbinger of any particular thing, but I don’t know everything about every mythological creature, I am sad to admit. What I DO know about them is that Mothman wasn’t one.

Not even a large Sandhill Crane, either! In the museum, a lot of the newspaper clippings said that Mothman was probably just one of these guys. They’re tall. They let loose a dreadful call. Being similar to storks, they probably lurk and enjoy terrorizing people, too. However, they are a light color, the red on their heads doesn’t GLOW as though it was two eyes, and they are not known to be common birds in West Virginia. 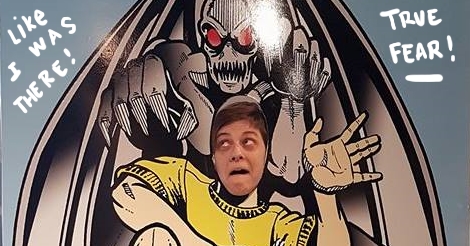 Throughout history, there have been many seemingly inexplicable occasions that grip communities — such as that one where people suddenly danced hysterically for days until they died. Or Roanoke Colony, where a whole town ~disappeared~. But then later, we discover that they had all become poisoned on a toxic weed or mold, or something. There is a chance that the TNT Factory was leaking some sort of poison into the air, or water, and everyone was suffering wild hallucinations as a result, and there was a cover-up that followed and that’s why it isn’t just the factual cause of all of these things. But are cover-ups really ever so successful on an industrial level? Probably not!

By determining what the Mothman is not, we are left with the only obvious answer: it was a government experiment gone wrong (or right!) which then got loose and caused some trouble around this town. This is why mysterious “men in black” showed up. This is why a small time journalist was silenced and ultimately killed. This is 100% entirely why there is so much confusion and misinformation on what should be an open and closed simple case! The government always makes everything impossible to follow even to this very day, and that is what they were doing in the case of the Mothman, 1967. But at least we made a friend! 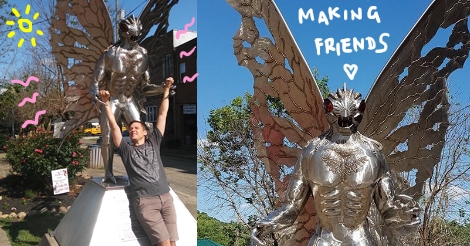